A History of London's Somerset House

© Cheryl Bolen
Though the Duke of Somerset was executed in 1552, the huge building still bearing his name sits in one of the most prime locations in all of London. The massive structure that was built around a quadrangle stretches from the River Thames to the Strand, adjacent to the present-day Waterloo Bridge. (See an aerial photo of Somerset House here http://www.blom-uk.co.uk/2011/09/image-of-the-week-%E2%80%93-september-14th-2011/.) 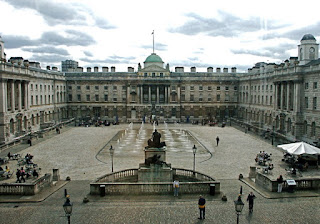 The courtyard at Somerset House
This is not the palatial house begun in 1549 by Edward Seymour, one of the brothers-in-law of Henry VIII. Upon Henry's death, Seymour became Lord Protector of the Realm under the reign of his young nephew, Edward VI, proclaimed himself the Duke of Somerset, and set about to build one of the finest mansions in London. Two years later he was interred, and he was beheaded in 1552.


The structure (far too large to be thought of as a house) that currently sits on the site of Somerset House was designed by William Chambers in 1776 and was extended ever further in the mid 1800s. During the Regency, a large portion of the building housed the Admiralty. An elaborate stairway within the building still is referred to as the Nelson Staircase.


For much of the 20th century, Britain's Inland Revenue was housed there. A variety of artistic societies have inhabited Somerset House over the past century, and it has also housed King's College and part of the University of London.

The quadrangle belongs to the people. During winter, it's an ice skating rink. In summer, fountains cool off hundreds. Many concerts and entertainment venues are also held in the quadrangle. Throngs of Londoners who've never heard of the beheaded Duke of Somerset still enjoy the "house" that he envisioned almost five centuries earlier. – Cheryl Bolen, whose latest installment in her lighthearted, romantic Regent Mysteries, An Egyptian Affair, releases Dec. 15.
Posted by Cheryl Bolen at 5:00 AM No comments: