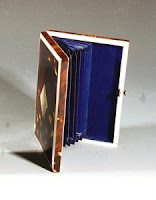 Calling cards were a considered more than an accessory during the Georgian, Regency, and Victorian eras. They were an intrical part of polite society. A gentleman or lady always carried them, and would give their card to the footman who answered the door, who would then announce their visit to the gentleman or lady of the house. They also used cards to inform others that they had arrived in town. A lady would wait in her carriage while her groom took her card and handed it in. The card was then presented to the lady of the house, who decided whether or not to receive. If the lady was 'not at home', she was rejecting her visitor. A reciprocal card may be given to the caller, but unless it was formally presented, she had no apparent desire to continue the acquaintance. If, however, a formal call was returned, followed by a formal call, the visiting lady could entertain hope for the relationship.

Gentlemen often place their addresses on their cards. According to an etiquette book of later in the century, the address of town house and main seat were included in the corners-- one in each corner. A married lady naturally placed her married name on her card, such as Mrs. James Jones. Days and times for “at home days” were also engraved upon cards.

Quality calling cards were made from a high-quality paper, often plain as ornamentation on a card was considered to be poor taste until later in the 19th century, and were engraved. They were kept in beautiful cases, which during the Regency era, were primarily of filigree, leather and tortoiseshell, but later in the century became more elaborate; ivory, tortoiseshell and woodwork. Late in the Victorian era, they were sometimes painted with views of castles or scenery. A gentleman’s card case was slightly smaller than a lady’s, since he had to carry it in his pocket.

Visits were most often made in the afternoon; as a general rule, new acquaintances between 3-4pm, frequent acquaintances between 4-5pm and close friends would after 5pm. Visits from acquaintances other than close family friends lasted no more than 15 minutes and their conversations seldom deviated outside of one's health and the weather. The custom became more and more elaborate as the century progressed, but the tradition of calling cards has lasted, evolving into business cards, which are seldom used outside of business.
Posted by Donna Hatch at 9:30 PM