Emery Lee and THE HIGHEST STAKES

Linda Banche here. Today, Historical Hussies is delighted to host Emery Lee, author of The Highest Stakes, a novel of horse racing in Georgian England, which Sourcebooks will release this month.

All you horse buffs, take notice! Today Emery talks about her love of horses, and the history of horse racing. Sourcebooks will give away two copies of The Highest Stakes. Leave a comment with your email address for a chance to win one. Emery will select the lucky winners, and I will contact them. Please note that Sourcebooks can mail only to addresses in the USA and Canada. 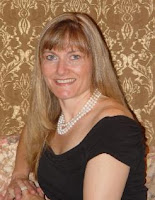 I will start by saying that as a history buff, I had fertile ground to explore while living in the upstate of South Carolina, an area rich in Revolutionary history. Building upon this ground, was a unique idea for a novel, a love story involving horses (my other passion) and colonial horse racing that would be set in pre-revolutionary Virginia and South Carolina.

I first began The Highest Stakes with what I thought would be a prologue, which I would use to present the history of my characters and their English origins. The problem was that the prologue ran away with me and became the novel!

Rather than Colonial Virginia under George III, my setting suddenly became England under George II! This is the world I was compelled to re-create in The Highest Stakes.

I found the society of Georgian England a fascinating paradox, with its powerful aristocracy using an outer façade of honor and politesse to cover its multifarious (love that word!) sins. In the words of Dr. Johnson: “Vice, in its true light, is so deformed, that it shocks us at first sight; and would hardly ever seduce us, if it did not at first wear the mask of some virtue.”

In commencing my story in England against the backdrop of high stakes racing upon which my hero, Robert Devington ultimately hangs his fate, I literally went back to the genesis of the Thoroughbred itself which arguably began in 17th century England at the court of the Merry Monarch.

King Charles II was an accomplished equestrian, who raced his own horses against those of his courtiers. Charles II’s enthusiasm defined horseracing as “the Sport of Kings.” As for his horses, the foundation of the Royal racing stud was based upon a number of mares imported from Tangier as part of Charles’ queen consort’s dowry.

Later, the English aristocracy would put their minds to the selective breeding of racehorses by importing a number of highly bred stallions from the Middle East to cross with the blood of the royal mares. Of the many fine stallions that came to be housed in the stables of the rich and powerful, three names would eventually dominate the racing world of Georgian England: the Byerley Turk, the Darley Arabian, and the Godolphin Barb.

The offspring of these three great “desert kings” would prove superior to all others, as they triumphed repeatedly on the English turf, and their prepotency would later name them the progenitors of the modern day Thoroughbred racehorse. These are the bloodlines that rip up the turf in The Highest Stakes.

We now cross the Atlantic where in strict contrast to England, horseracing was not limited to the aristocracy. At county fairs, in plowed fields, and on barely-more-than-cow-paths, the colonists embraced a completely different kind of race on another distinctly new breed of horse they called the Quarter Miler. With few racing tracks to speak of, the Colonial races were mostly quarter-mile sprints, match races run with one’s neighbor for a bale of tobacco.

Moreover, just as the inhabitants of America would later come to be, the blood of the quarter mile racing horse was as mixed as the Thoroughbred was pure. His origins were a cross of the original Spanish mustangs, the Galloways imported from the British Isles, and the Chickasaw ponies bred by American natives and greatly prized for their utility and speed over short distances.

My challenge in The Highest Stakes was to converge these two racing worlds, as I wove into the drama and romance, the histories, progeny, and bloodlines of these early racing horses of both England and Colonial Virginia.

I hope that readers will appreciate this research, and that most of all that they will enjoy the ride!

THE HIGHEST STAKES BY EMERY LEE—IN STORES APRIL 2010
All thoroughbred horses in the world to this very day can trace their blood back to three specific Arabian stallions imported to England in the early part of the 18th century. Against this backdrop comes a painstakingly researched novel with breathtaking scenes of real races, real horses, glimpses of the men who cared for them, and the tensions of those who owned and controlled them.

In 18th century England and Colonial Virginia, when high-spirited stallions filled the stables of the lords of the land and fortunes were won and lost on the outcome of a race, a love story unfolds between a young woman for whom her uncle's horses are her only friends and the young man who teaches her everything about their care and racing. When she's forced into marriage, his only hope of winning her back is to race his horse to reclaim all that was stolen from him—his land, his dignity, and his love.

About the Author
Emery Lee is a life-long equestrienne, a history buff, and a born romantic. Combine the three and you have the essence of her debut novel: a tale of love, war, politics, and horseracing. A member of Romance Writers of America, she lives with her husband, sons, and two horses in upstate South Carolina. For more information, please visit http://authoremerylee.com/.
Posted by Linda Banche at 12:01 AM

Ever since I heard about this story (at Moonlight and Magnolias last year, IIRC), I've been waiting, waiting, waiting! It sounds totally fascinating, and I'm glad the wait is almost over.

Hi Emery, nice to have you here. THE HIGHEST STAKES sounds wonderful!

Barbara - Thank You so very much! It was thrilling to finally see two and a half years of work in print. How lovely it was!!! I truly hope you enjoy the ride and look forward to chatting with you again at M&M!- Emery Lee

Linda- I very much appreciate the chance to share my book!
My Best Wishes - Emery Lee

I always appreciate the research - it's why I enjoy historicals so much. It's a new topic for me and I know I'm going to enjoy it!

I consider myself pretty horse crazy, mostly because of research I've done for an upcoming novel. Though I don't ride, relatives do (dressage), and I enjoy any horse show and visiting some of the various breeds in the New England-New York area and in the UK. I will eagerly await your novel. Emery. It sounds fascinating.
Best of luck with it.
Elie Sullo

The winners of the two copies of THE HIGHEST STAKES are:
Eleanor Sullo and Catslady.

Thank you all sincerely for having me, and for all your comments on my post.

I hope you will "Enjoy the Ride".

Fascinating! I've got a Regency romance ms lurking here, finished but not yet polished enough to send out, about a similar-sounding young Regency lady, horse-crazy and quite shocking in her behaviour!

I came up with the idea when considering the amount of horsey books and magazines there are for young girls today who are obsessed with horses, and wondering what would have happened to a girl like that in Regency times, when hanging round the stables all day and wanting to race horses must have been a big no-no for anyone in the upper echelons of society.

I shall certainly buy this book, Emery. Sounds fabulous!

It sounds totally fascinating, and I'm glad the wait is almost over.
data entry work from home

Just dropped by today and saw your posted comments. Would love to hear from you after you read it!
My email is: authoremerylee@yahoo.com