Guest Sharon Lathan: Bow Down to the Prince

Linda Banche here. Today I welcome Sharon Lathan and the latest entry in her saga continuing the Pride and Prejudice story, In the Arms of Mr. Darcy.

Leave a comment with your email address for a chance to win one of the two copies of In the Arms of Mr. Darcy which Sourcebooks has generously provided. Sharon will select the winners. Check the comments to see who won, and how to contact me to claim your book. If I cannot contact the winners within a week of their selection, I will award the books to alternates. Note, Sourcebooks can mail to USA and Canada addresses only.

Sharon selected the winners Diane Gibson and Karen Wasylowski! Diane and Karen, I don't have email addresses for either of you. Please contact me by November 7, 2010 at linda@lindabanche.com to claim your books or I will award them to alternates.

In the history of monarch ruling countries being presented formally to the reigning monarch has always occurred and usually involved a fair amount of pomp. The wheres, whys, and hows varied from country to country and evolved from decade to decade but one fact was probably constant: It would have been a nerve wracking experience! 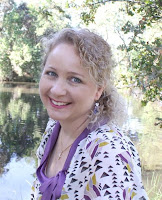 In my latest novel, In the Arms of Mr. Darcy, it was time for Mr. Darcy’s sister Georgiana to make her debut into Society and during the Regency a lady or gentleman of circumstance was not fully accepted among the ton until presented at the Court of Saint James. Additionally, wives of the aristocracy or gentry were also required to bow before the Prince Regent if not having done so before, thus it was proper for the former Elizabeth Bennet to go through the process as well. Poor Elizabeth and Georgiana!

As you can probably imagine, one did not simply waltz into the palace! First off she had

to be sponsored by a lady previously presented at court, this usually her mother or other close relative. The debutante’s name was submitted w 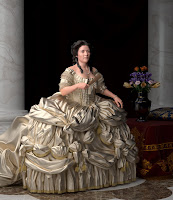 eeks in advance so that the preparations could be made. This was not so easy since the ceremonial dress was specifically dictated and must be created precisely, the cost of the garment enormous. This alone prevented many young women of modest means from entering Society. The French inspired gowns were voluminous with old-fashioned wide hoop skirts, long trains, heavy fabrics, and a multitude of ruffles, lace, and other adornments. The look was topped off with massive headpieces that always included long feathers. Simply standing in the outfit was often a challenge so imagine how tough it was to walk in. It took weeks to practice the deep curtsey and exact steps even though they were very simple and took less than 2 minutes to complete!

On the appointed day of the levee the debutante would gather with other ladies in the Tapestry Room of St. James’ Palace, often waiting hours in the crowded, airless chamber until her name was called. She would have her train smoothed by a waiting page while the Lord Chamberlain announced her to the Court.

Into the Presence Chamber she went, His Royal Highness sitting on his throne and the room crowded with various dignitaries. At a stately pace she walked toward the Prince, recited the short rehearsed ph 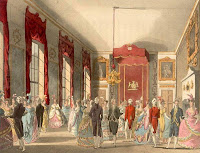 rase, and then curtseyed. Not a simple bob of the knee but a bend nearly to the floor, then a bow from the waist that must be held before rising to then do the whole thing over again to the luminaries on either side of the Prince. Whew!

But wait, there’s more! Next she had to pick up her train, gracefully drape it over her arm and exit, walking backwards. Yep, backwards! With her eyes constantly on the Prince, steps regulated and straight until out of his sight. Not sure about you, but I think walking barefoot over hot coals could not be worse.

An excerpt from In the Arms of Mr. Darcy:
Later, Lizzy would have the oddest recollections of the ethereal moment when she was presented to his Royal Highness the Prince Regent. She vividly remembered the crimson velvet and gold lace covered throne sitting upon the raised dais with a canopy of identical material surmounting. For all her life she would smell sweet violet and primrose and envision the bouquets artistically place about the throne room. She would retain only vague images of the numerous royal attendees and could not recall what His Highness wore, but she sharply saw the bright blue of his eyes that were similar to her husband’s and the faintly feminine mouth that lifted in a genuine smile.

He was rather ordinary in appearance, not handsome or remarkable, while also exuding a presence that was unlike anything she had ever experienced at the same time. There was power and majesty that rippled the air about him, an aura of ancient heritage and eminence that awed her. He did not seem as bored as she would have imagined he would be, the ceremony surely excruciatingly tedious from his perspective, and his eyes flickered with polite interest as he watched her execute the proper genuflection. Perhaps he hoped for at least one young lady to topple over, just to bring some excitement to the proceedings! Lizzy did wonder if this were the case as his eyes were distant when she rose, flickering briefly toward a small food laden table set into an alcove across the room. He did not move a muscle, waiting with regal dignity as she played her part flawlessly, spoke the well-rehearsed words, curtsied to the other royalties flanking the throne, and then swept the train into her right hand as she initiated her smooth retreat.
© Sharon Lathan, Sourcebooks Landmark, 2010


IN THE ARMS OF MR. DARCY BY SHARON LATHAN

If only everyone could be as happy as they are…

Darcy and Elizabeth are as much in love as ever—even more so as their relationship matures. Their passion inspires everyone around them, and as winter turns to spring, romance blossoms around them.

But the path of true love never does run smooth, and Elizabeth and Darcy are kept busy navigating their friends and loved ones through the inevitable separations, misunderstandings, misgivings, and lovers’ quarrels to reach their own happily ever afters…

About the Author
Sharon Lathan is the author of the bestselling Mr. and Mrs. Fitzwilliam Darcy: Two Shall Become One, Loving Mr. Darcy: Journeys Beyond Pemberley, and My Dearest Mr. Darcy. In addition to her writing, she works as a Registered Nurse in a Neonatal ICU. She resides with her family in Hanford, California in the sunny San Joaquin Valley. For more information, please visit www.sharonlathan.net, as well as the two group blogs Sharon contributes to: www.austenauthors.com and www.casablancaauthors.blogspot.com.
Posted by Linda Banche at 5:01 AM

Hi Sharon. Those dresses are beautiful, even if hard to navigate in. But then, you have to suffer to be beautiful!

I just finished your "A Darcy Christmas" in the book of the same name. I loved it. I admit I liked the first chapter the best, before Darcy and Elizabeth marry, where a lonely Darcy wonders if he truly loves Elizabeth. Wonderful!

Imagine all the preparation and cost for a 2 minute audience! I guess we all should be grateful we live in the here and now and don't have to worry about that, though I guess it was an honor at the time.

I remember reading something similar when Lillie Langtry was presented at court and she had to practice catching the train over her dress.

The books sounds wonderful. Nothing like a continuing story of the Darcy/Bennett gang!

Hi Linda! It is so fun to be here! I love Historical Hussies. The name alone is so cool!! I greatly appreciate the invitation.

I am very happy you loved A Darcy Christmas! And yes, the first snippet was heart wrenching. That was fun to write!

Hi susied. I really couldn't imagine going through it. Most of the documentation on Court presentation is from the Victorian Era. Queen Victoria took the pomp a step further, even. Wild! But by that time the dresses were more relaxed. In fact, once the Prince Regent became king in 1820 one of the first items on his agenda was to get rid of the hooped skirts. Lizzy and Georgiana missed that by a year! Knowing Lizzy she probably harassed Darcy about it to no end!

Just popping by to say that I love your books, Sharon! Can't wait to read this new one.

Hi Sharon,
Once again, I am amazed by the vividness of your descriptions! I can almost feel the weight of the fabric and the nerves of the women. Wonderful!

I loved the part when Lizzy was presented and I imagine her walking backwards trying not to laugh outloud!! It must had been beautiful all those dresses! A Darcy Christmas was wonderful - loved how you started and finished the story - tied it all at the end and the flashbacks - My only complain it was too short LOL - I wanted to keep reading!!! Of course I finished it and my 70 year old aunt took it away to read! She loved it! I am waiting to get it back!

Thank you Dawn! Happy you stopped by. :-)

Hey Diane. You are so kind. I take one look at the fashion plates and paintings of the court gowns and it boggles my mind how anyone could wear them. But the worst is the headpieces! Egads. I know I would fall over.

Hi Seli! Great to have you come by. Thanks for your praise of A Darcy Christmas. I have to admit that I loved writing it! I hope your Aunt enjoys it.

Beautiful description of be presented at court. I think I could have performed that bow about ten years ago - not anymore. "A Darcy Christmas" was wonderful!

How lovely, Sharon! Thanks for the visit today--I love learning about some of those details :) I have to admit that I wouldn't enjoy going through all of that fuss, but it sure is fun to imagine!

Hello Margay. You are everywhere!

Thanks for coming by, Karen. I didn't know you had read A Darcy Christmas! Thanks for the comment. I am very happy you enjoyed it. I appreciate my fellow Austen Author stopping by :-)

I am quite sure I couldn't have done that deep curtsy at any time of my life!

I'm with you, flchen. I am very much a no-fuss kind of gal. The dresses are beautiful, but I would have preferred to breezy lightness of Regency wear for sure.

Wonderful excerpt! I've always been a "Pride and Prejudice" fan so this is right up my alley. I'm so greatful I didn't live back then. Those dresses sound unbearable!

What a wonderful post! The ceremony sounds very ominous indeed! I love your excerpt. The characters always remain true. Lizzy's reaction is pefect! I do feel for them having to undertake such a task. However If I were married to Darcy I would have no qualms doing what must be done to keep protocol alive within the family!
A great read thanks!
TSBO devotee
Vee

Ever consider automating your free satoshi collections with a BITCOIN FAUCET ROTATOR?