Why are people so fascinated by pirates?

As a child, one of my favorite rides at Disneyland was "The Pirates of the Caribbean. I loved Peter Pan, Treasure Island, and any other pirate story I found. Pirates of the Caribbean, the movie, made millions with fans divided between Captain Jack Sparrow and Will, who pretty much turned pirate to save Elizabeth. When my husband and I were in Las Vegas, we went to the (then) new Treasure Island Hotel which used to (maybe still does?) put on a great show outside with a reenactment of the navy battling pirates. When the pirates defeated the navy, everybody cheered.

Really? We cheered when the good guys lost and the bad guys won?

Are we all a bunch of sociopaths?

Nah. I think it goes back to the bad boy allure. Bad boys, and pirates in particular, are non-conformists. They have the courage to buck the system. Pirates wore blousy white shirts instead of those stuffy coats and ugly hats and white powdered wigs that fashionable English and American gentlemen wore in the 1700's. They were totally free to go where ever they pleased and do anything they wanted. And they had the money to do it, thanks to the plunder they took. And in the case of Las Vegas, the pirate captain was hunky and drop-dead gorgeous, which never hurts :-)

We think of pirates as swashbuckling hunks who carried big curved swords, laughed, loved and lived freely. And having an eye patch and a parrot on the shoulder is pretty cool, too, not to mention a certain allure to a map with an X that marks the spot to buried booty--enough to live on like kings.

Maybe we all secretly wish we could steal from the rich, throw social norms out the window, and make our enemies walk the plank. Maybe we wish we could hold a sword to the throat of someone who tries to keep us down.

It's really just a fantasy. Real pirates are nothing like the men in the stories, as I discovered when I researched them for my Regency pirate romance novel, The Guise of a Gentleman.

Though the "Golden Age of Piracy" began in the 1700's, there have been pirates since the beginning of ships and sailing, and there are still pirates today. By the Regency Era, pirates weren't as prevalent as the Golden Age of Piracy, but after the end of the Napoleonic War, a lot of sailors, especially privateers, found themselves out of work. A few of them turned to piracy.

Because most of these pirates preyed upon foreign vessels, the British government sorta turn a blind eye to them. In my story, they formed a pirate ring, but that didn't happen in real life that we know.

Though a pirate's life seemed filled with glamor and adventure, most pirates were, first and foremost, sailors. Much of their daily life involved staying alive against the unforgiving sea. Off-shore reefs, changing sandbars, storms, the threat of fire, other ships, lack of drinkable water, and shortage of food filled constantly threatened their lives. To my knowledge, there was no such thing as walking the plank--that appears to be a myth created by Robert Louis Stevenson. Nor did pirates bury their treasure--they took it to the nearest port and sold it on the black market or they spent it on women and food and drink. Often, though, pirates sacked entire towns when they came ashore, looking for blood and more plunder instead of just a party. There are many stories of torture, rapine, and destruction. They even sank down to the level of slave trading.

Pirates enjoyed something navy sailors did not--a voice in decisions and fair treatment. On board a pirate ship, all the sailors got to have a vote in what they did, where they landed, etc. They even voted on who would be captain who had ultimate authority only during battle. The rest of the time, it was share and share alike--the same hard work, the same food, the same living conditions. 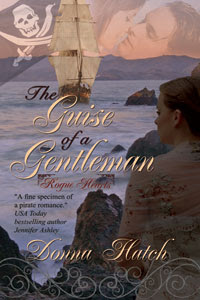 In my pirate Regency romance novel, The Guise of a Gentleman the hero, Jared Amesbury, gets orders from the government to pose as a pirate to help discover the head of a pirate ring. Although I showed a lot of what real pirates were like--ruthless, unpredictable, without conscience, blood-thirsty--most of Jared's men are just sailors and some of them even have a heart because Jared had weeded out the worst of the reprobates when he took over as captain. Jared, of course, is super hunky and wonderful and he's also very conflicted. Balancing fantasy with realism is a challenge in every story, but I have to admit, The Guise of a Gentleman was one of the most fun to write.

I think pirates will always capture our imagination and be the stuff of fantasy. So enjoy the fantasy. And "Argh, matey! Don' forgit yer sword!"
Posted by Donna Hatch at 12:01 AM

Email ThisBlogThis!Share to TwitterShare to FacebookShare to Pinterest
Labels: pirates, Regency Romance Novels, The Guise of a Gentlman

You are so right - it's the fantasy. It's all fantasy and mostly what we hope or want it to have been like lol. I also like reading about the real happenings but can suspend belief when necessary lol.

If, as an author, you write "sorta", it does sorta put off anyone who values the English language from reading your book...