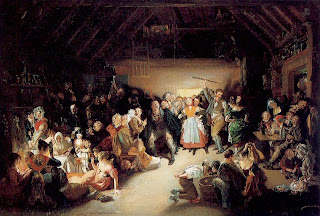 Halloween as we know it today was not really a holiday during the Regency. On October 31, the Celts celebrated Samhain, a harvest festival which contained some elements of a festival of the dead. The Christian religion attempted to neutralize the pagan Samhain by combining it with Christian holy days. November 1 was All Saints' Day, or All Hallows Day, so October 31 became All Hallows' Eve.

By the Regency, All Hallows' Eve was mainly a rural festival, rarely noticed in the cities. Elements of Samhain remained in the customs of guising, lighting bonfires, and carving jack o' lanterns.

On Samhain, the barriers between the real world and the supernatural world thinned, allowing the dead, as well as evil spirits, to walk the earth. People left their doors open to welcome the ghosts of their ancestors inside, while at the same time keeping the evil ones out. An associate custom was guising, in which people dressed as ghouls. By blending in with the demons, they avoided them.

Bonfires were also popular on all Hallows' Eve. The fires lit the way to the afterworld of relatives who had died during the past year. They also scared the specters and goblins away.

Carving jack o' lanterns was another custom. Believing the "head" of a vegetable its most potent part, the Celts carved vegetables into heads with faces to scare away supernatural beings. By Regency times, these lighted vegetables were called jack o' lanterns from the seventeenth century Irish legend of Shifty, or Stingy, Jack. Shifty Jack, so evil neither Heaven or Hell would take him, was doomed forever to wander the earth while carrying a lantern. 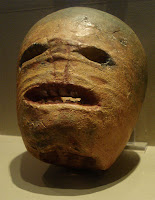 The lantern was usually carved from a turnip or mangelwurzel, as pumpkins were largely unknown in Britain at the time.

Since turnips and mangelwurzels are dense, not hollow like pumpkins, carving such a jack o' lantern was quite a feat.

The beginnings of many of today's Halloween practices existed in the Regency. If you enjoy Regency and Halloween, you might like Pumpkinnapper, my Regency Halloween comedy.

kin thieves, a youthful love rekindled, and a jealous goose. Oh my!

P.S. The top picture is Snap-Apple Night, painted by Irish artist Daniel Maclise in 1833, of a Halloween party he attended in Blarney, Ireland. From Wikipedia.

Your posts are always informative - thanks!

Nice post. Halloween is my favorite time of year. :)

You're welcome, catslady. Gald you enjoyed it.

Thanks, Ranae. I knew I wasn't the only person with a thing about Halloween!