Parliament and the Reform Act of 1832

We've all heard of Parliament--the House of Lords and the House of Commons. You'd think that the names of the two houses (roughly the equivalent of the US Senate/House), were fairly self-explanatory, but they're a bit of a misnomer.

The House of Commons was comprised of both elected lords and commoners. Like the US House of Representatives, each borough (or district) had a set number of representatives to sit in Commons. By the early 1800s, many of the boroughs were no longer as populated or had even disappeared (one literally sunk), but still retained the same representation they had years before. Many of these boroughs sold their seat to the highest bidder, effectively giving those seats to one person, who then passed those seats to their cronies, or to the younger sons of lords. 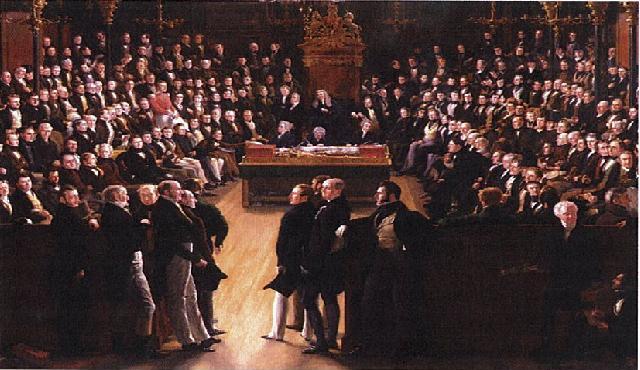 By the late 1820s, early 1830s, the Whig party had managed to gain control of Commons, and attempted to pass a reform bill reorganizing representation to remove these "rotten" or "pocket" boroughs. The House of Lords (mostly from the Tory party) blocked this bill until King William threatened to create new peers and public riots broke out. The Representation of the People Act or the Reform Act finally passed in 1832.

This act not only removed representation from several of the older boroughs and gave representation to newer, larger boroughs (most notably in the industrial part of England), it also gave more people freedom to vote, including tradesmen and tenants-at-will.