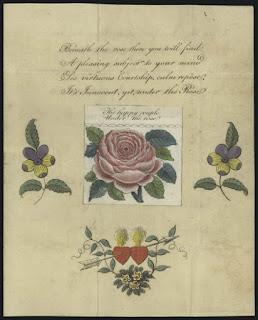 Happy Valentine's Day!
Valentine’s Day in Regency England was very different from the way we celebrate it today. People of all classes exchanged hand-made cards with hand-written verses. During the Victorian Era, Valentine’s Day cards became mass-produced, but in the Regency, such a gesture required more thought and care.
Cards sent were as varied as the senders. Some were made with gilt-edged paper, trimmed with lace–real lace, not paper lace since that had not yet been invented. They could be embossed or have gold overlay or even sequins. Those who could not afford such luxuries made them out of simple paper which was still an expensive commodity for the less affluent. Flowers seemed to be the most common decoration but cards were also decorated with hearts, birds, and even timeless cupids.
Those who fancied themselves poetic wrote their own verses but most probably copied verses from known poets, or even from books that provided special, Valentine’s Day messages. These books even provided replies for the lady to use to encourage or dash the hopes of her admirer. The verse in the card to the right says (if I deciphered the handwriting correctly):
I dream and my heart consuming layOn cupid’s burning shrineI thought he stole my heart awayAnd placed it near to thine.
Here is a sad verse from a Valentine’s Day card from 1790:
My dear the Heart which you behold,Will break when you the same unfold,Even so my heart with lovesick pain,Sure wounded is and breaks in twain.
This seems to have been written by someone who had already been rejected but needed the recipient to know of his pain and broken-hearted devotion. 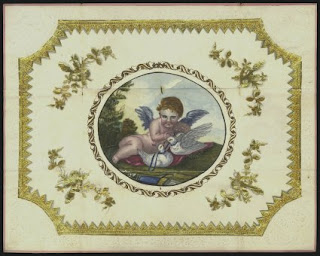 Other sources cite much more sordid Valentine verses, much to the horror of the parents whose daughters received such bawdy notes. I won't share those here lest I offend my readers' delicate sensibilities ;-)
Valentine’s Day in Regency England was a day to celebrate love, or at least interest, for all classes. What I find puzzling is that it was considered ill-mannered during the Regency to exchange letters or notes between unmarried ladies and gentlemen. However, this practice seems to have been largely ignored on Valentine’s Day. Reportedly, the post was inundated with mail on that day filled with Valentine’s Day cards exchanged between the young and young at heart. I found no mention of Valentine’s Day cards exchanged between married couples. They could have been, but that didn’t seem to be a common practice. But don’t tell my husband that

If you’d like to learn more about the history of Valentine’s Day, check out my post: Will the Real Valentine Please Step Forward.
There are some beautiful Regency Valentine’s Day cards on auction here:
Sources:
Ruth Axtell’s Reflections on Valentine’s Day at the Christian Regency blog
Susan Holloway’s Father Warns Against Depravity on Two Nerdy History Girls
Donna Hatch
Author of Historical Romance and Fantasy, award-winning author Donna Hatch is a sought-after speaker and workshop presenter. Her writing awards include the Golden Rose, the International Digital Awards, the Readers' Choice Award, and the prestigious Golden Quill. Her passion for writing began at age 8 she wrote her first short story, and she wrote her first full-length novel during her sophomore year in high school, a fantasy which was later published. In between caring for six children, (7 counting her husband), her day job as a docent for a one-room schoolhouse, and her many volunteer positions, she still makes time to write. After all, writing IS an obsession. All of her heroes are patterned after her husband of over 20 years, who continues to prove that there really is a happily ever after.
Posted by Donna Hatch at 11:57 AM

Did you hear there is a 12 word sentence you can communicate to your crush... that will induce intense feelings of love and instinctual attractiveness for you deep inside his heart?

Because hidden in these 12 words is a "secret signal" that triggers a man's impulse to love, adore and look after you with his entire heart...

This impulse is so built-in to a man's mind that it will make him work better than ever before to make your relationship the best part of both of your lives.

Matter of fact, triggering this powerful impulse is so mandatory to achieving the best ever relationship with your man that the instance you send your man one of these "Secret Signals"...

...You will instantly find him expose his heart and mind for you in a way he never experienced before and he will perceive you as the only woman in the world who has ever truly understood him.