Linda Banche here. Today I welcome Kara Louise and her book, Darcy's Voyage, where Pride and Prejudice's Darcy and Elizabeth meet on a ship. In this post, Kara gives us a fascinating view of the ships of the Regency.

Leave a comment for a chance to win one of the two copies of Darcy's Voyage which Sourcebooks has generously provided. Kara will select the winners. Check the comments to see who won, and how to contact me to claim your book. If I cannot contact the winners within a week of their selection, I will award the books to alternates. Note, Sourcebooks can mail to USA and Canada addresses only.

And the winners Kara selected are: peggy and catslady. catslady, I know who you are *g*. peggy, please contact me at linda@lindabanche.com by September 21 or I will select an alternate. 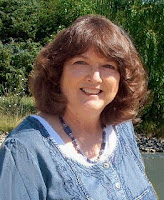 Thanks for inviting me to join you today. I am sure most of your readers love all things having to do with history, and I am here to tell you some interesting facts about ships and sailing that I discovered while researching my novel, Darcy’s Voyage, which was just released by Sourcebooks.

I discovered a site that inspired my “idea” for the ship Pemberley’s Promise, which is the name of the ship in my story. It was the Jeanie Johnson, which carried about a thousand Irish to Canada during the famine in the 1840s. While this was later than Pride and Prejudice, it gave me pause to consider the type of ship Mr. Darcy would invest in and the kind of captain he would put in place.

The Jeanie Johnston had much more desirable conditions that most of the “coffin” ships that took people across the Atlantic. By the name of those other ships, death was very frequent, either through disease spreading throughout the passengers or being wrecked at sea. Unlike those ships, the Jeanie Johnston was “a well run and humanely operated ship which cared as best it could for the fleeing emigrants.”

Some of the things attributed to its not losing a single passenger on its many voyages was the humanitarian attitude of the ship’s master, Captain James Attridge. He had a genuine concern for the welfare of his passengers. The hatches were opened whenever possible, bedding was taken out and aired, the accommodations below deck were kept as clean as possible, and everyone was encouraged to take a walk on deck each day, unless the weather was too rough. Pemberley’s Promise is, as you might guess, owned by Mr. Darcy, and I think he and Captain Wendell would have striven for the same excellence in keeping the ship clean and humane treatment of passengers.

Another interesting fact I stumbled upon was finding out that two children would often be considered as one adult in their bedding arrangements. This provided the inspiration in Darcy’s Voyage where Elizabeth willingly gives up her bed. She has become acquainted with a lady who is with child who has two daughters sharing a bed, one of which is sick. When the mother gives up her own bed for the healthy daughter, Elizabeth will not allow this woman to sleep on the floor and gives up her bed to the mother.

I also became fascinated reading a diary of a married woman who had sailed in 1809 from England to Australia. While she had not been on a large ship carrying a lot of passengers, her diary was very interesting.

She had one entry in her diary that was humorous. A young man had fallen overboard and the sailors were in a bit of confusion over it. When the captain saw their confusion, he asked if someone had fallen overboard, to which they replied, “Sir, Nobody has fallen overboard.” It was fortunate this man was rescued, as the nickname he went by was Nobody. The captain at first did nothing, but fortunately realized the mistake, and a small boat was put out to retrieve him. I think the moral of that story is to be careful what nickname you go by, or at least make sure the person in charge knows what it is!

I was first inspired to write a story about Darcy and Elizabeth at sea after reading Richard Henry Dana’s Two Years Before the Mast. This was Dana’s diary of a journey in the 1840s from Boston, down around the cape, to Southern California. I found his descriptions of the ship fascinating and his life on board ship, while definitely not romanticized, was certainly enough to get me thinking about putting Darcy and Elizabeth on a great ship.

While I may have merged a little fiction with historical fact in Darcy’s Voyage, I hope these little bits of information I learned were of interest to you. Thanks again for letting me share with you today.

I have included two of the websites I found that were of great help. The first is a description of the Jeanie Johnston and the second is a compilation of diaries written at sea from 1809 - 1822.

In this enchanting and highly original retelling of Jane Austen’s Pride and Prejudice, Elizabeth Bennet sets out for the new world aboard the grand ship Pemberley’s Promise. She’s prepared for an uneventful voyage until a chance encounter with the handsome, taciturn Mr. Darcy turns her world upside down.

When Elizabeth falls ill, Darcy throws convention overboard in a plan that will bind them to each other more deeply than he ever could have imagined. But the perils of their ocean voyage pale in comparison to the harsh reality of society’s rules that threaten their chance at happiness. When they return to the lavish halls of England, will their love survive?

ABOUT THE AUTHOR
Ever since Kara Louise discovered and fell in love with the writings of Jane Austen she has spent her time answering the "what happened next" and the "what ifs" in Elizabeth's and Darcy's story. She has written 6 novels based on Pride and Prejudice. She lives with her husband in Wichita, Kansas. For more information, please visit her website, Jane Austen’s Land of Ahhhs, http://ahhhs.net/.
Posted by Linda Banche at 5:01 AM

Hi Kara, fascinating information about ships. I liked the story about "Nobody" falling overboard. *G*

Hi Kara. I enjoyed your post I like the info on two children would often be considered as one adult in the bedding arrangements.And how Elizabeth would not let the mother sleep on the floor.

I am a huge JA fan, and I love that so many authors do research ahead of time to combine fact with fiction. Makes the story a lot more interesting and believable. Those little details make it special. I can't wait to read your book. I wonder at what Lizzy and Darcy will do next.

I can't help wondering what they will do next too, karana. That's where these stories all start, don't they! I liked the 'nobody falling overboard' too, Linda! It's amazing what you can find online. And Peggy, those bedding arrangements play a big part in the story while they're on the ship. I hope your readers will enjoy the book!

Nobody reminds me of Who's on First lol. I found it all interesting. My grandparents on both sides came from Sicily but that was around 1910 to 1920's where things weren't quite as bad but not so great either!

Wow Kara,
That was so interesting.I have done some research on ships coming to Australia in the early 1800's for one of my books, but mine were convict ships. Most of them were shocking, floating coffins, but a few were decent. Like you say, it all depends on the Captain.

Wonderful post -- I especially enjoyed the trivia about Capt James Attridge. I think we're used to imagining everyone as backwards or barbaric, so I shouldn't be surprised that someone was so careful with their passengers.

As @karana said, I too am enjoying the great historical research done by authors like Ms Louise -- delicious to read and educational to boot! ;)

Thank you so much, Linda and Kara, and congrats Peggy.