February: The Month of Love

Valentine’s Day was a saint’s day long before it became associated with greeting cards and chocolates—and romance. But even with the romantic connection it has today, not that many romances use a Valentine’s setting. 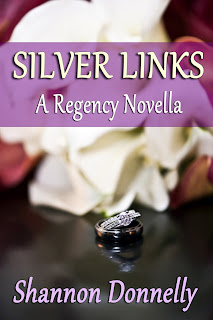 Silver Links, one of my Regency Novellas, is placed right around Valentine’s—partly because the editor asked for the connection, but also because it worked very well into the plot (the heroine tries to arrange a romantic Valentine’s event for her husband, to help patch a rocky bit, but of course it all goes wrong). Maybe that’s why Valentine’s isn’t used much in romances—a romance is all about the rocky bits of a relationship, instead of the perfect day we all hope to have on Feb 14.

Traditionally in England, spring began on St Valentine's Day (February 14th), the day on which birds chose their mates. Given England’s usual weather that seems optimistic thinking to try and put spring so early, but perhaps it was the hint of warmth coming that encouraged both people and birds to look ahead. In parts of Sussex, Valentine’s Day was even called 'the Birds' Wedding Day'.

For the Celtic year, winter ended February 1 with the celebration of Imbolc or Oimelc. This was the time when ewes begin to lamb, and life began to return. For the ancient Celts, this was the celebration for Brigid (also Brigit, Brighid or Bride), the Light-Bringer, one of the main Celtic goddesses. She was strong enough to survive and be transformed by early Catholics into Saint Bridget, who was celebrated, along with the Virgin Mary, on February 2, Candlemas Day. (Yes, the days are getting longer again and that’s always a reason to celebrate.)

Many other English traditions and superstitions came to be associated Valentine’s day, and some of these were in place in the early 1800’s, the time of the English Regency :
February is also the time of Shrove Tuesday (the last day before Lent begins on Ash Wednesday). Traditionally, Shrove Tuesday was the day to indulge, so pancakes were a traditional food (the butter, fat and eggs might all be things to give up for the forty days of Lent). So, after romance comes indulgence, and then you must give up some things. Hmmm—that sounds about right for any romance, so perhaps February is the month of love.

Do you have any special Valentine’s traditions? (Personally, I love those candy hearts with message—so very non-historical, but they have deep roots in my childhood.)

She also has out the Mackenzie Solomon, Demon/Warders Urban Fantasy series, Burn Baby Burn and Riding in on a Burning Tire, and the Urban Fantasy, Edge Walkers. Her work has been on the top seller list of Amazon.com and includes Paths of Desire, a Historical Regency romance.
She is the author of several young adult horror stories, and computer games. She lives in New Mexico with two horses, two donkeys, two dogs, and only one love of her life. Shannon can be found online at sd-writer.com, facebook.com/sdwriter, and twitter/sdwriter.

I loved hearing about all the traditions. Probably due in large part to the military, I can count on one hand the number of times in 32 years my husband and I have been together on Valentine's Day. We gave up on it a long time ago.

Lots of interesting details here. Thanks. Could that tradition from the Middle Ages be where the expression "wearing your heart on your sleeve" comes from?

Hello,
You are a Great while writing in the blogs it is awesome I liked it too much good and informative thanks for the sharing.