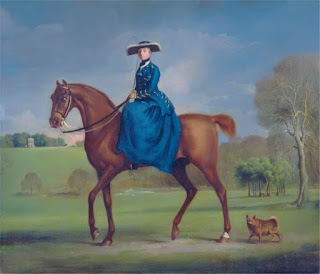 Riding sidesaddle was the quintessence of good breeding for the Regency lady. More than a mode of transportation or a way to relax and get fresh air and exercise, it also provided a prime time to socialize—most notably with gentlemen ;-) . A lady riding sidesaddle well, also spoke, without words, one's status. Prior to Elizabethan England, ladies rode astride or sat in an awkward riding seat and hung on for dear life.

During the 17th Century, ladies started riding sidesaddle, also known as aside. Even Queen Elizabeth herself, known as the "virgin queen" because she never married, was an accomplished horsewoman who rode sidesaddle. 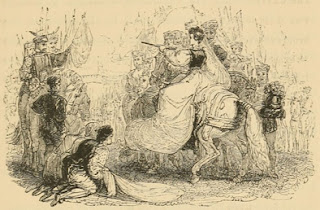 A lady competently riding sidesaddle, combined with a stylish riding habit, spoke louder than words of her social standing. Regency ladies had to take riding lessons, have time to practice the art of riding, and be wealthy enough to afford a horse trained as a lady's mount. Work horses could simply graze; riding horses needed feed, grooms, tack, farrier fees, etc. It became a mark of distinction and admiration.
From A Young Lady’s Equestrian Manual, published 1838: 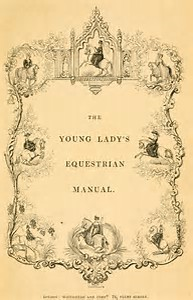 RIDING on Horseback is, confessedly, one of the most graceful, agreeable, and salutary of feminine recreations. No attitude, perhaps, can be regarded as more elegant than that of a lady in the modern side-saddle; nor can any exercise be deemed capable of affording more rational and innocent delight, than that of the female equestrian.
Little girls learned to ride astride on a pony or donkey. As they grew and improved their skills, they learned to ride aside and usually changed to riding a horse. Thought in urban areas, riding donkeys were common, but riding in London require a beautiful horse, since in London, one rode to see and be seen, as well as get a little relaxing exercise.

Few grown ladies rode astride even in the country. It was viewed as unladylike and scandalous. It was probably also a declaration of one's incompetence at riding sidesaddle.
Despite what you may have heard, riding sidesaddle is actually comfortable. The seat and pommel are and were padded. One sites with one's back straight like sitting in a chair with the legs crossed or sitting sideways on the bed or couch with a knee propped up higher than the other. Sidesaddle is not that different. 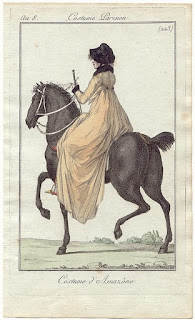 Mounting a horse is easy. One must simply use a mounting block or other object such as a stile or boulder or tree stump to stand on. Having a gorgeous man give one a "leg up" is always a good idea, though ;-) Horses trained to be a lady's mount will hold still while the lady mounts.
Riding, whether astride or sidesaddle, is more about balance and keeping one’s center of gravity than the saddle--just look at bareback riders and even bronco riders. A well-trained, well-behaved horse and a skilled rider are capable of doing anything sidesaddle that can be done astride. Georgian and Regency frequently "rode to hounds," a fast-paced race through the country, leaping objects such as fences, hedges, and fallen trees to keep up with the hounds as they chased a fox.

Though I occasionally see images from the Regency Era show ladies riding with a sort of seat belt wrapped around them, it was uncommon. Certainly it appeared in engravings which suggests they were used, but I doubt any lady who prided herself an expert would have been caught dead using one. Besides, you can’t always believe what you see in pictures. As a harpist, I am often surprised (disgusted?) at how many harpists are depicted playing the harp on right side instead of the left, or even from the column side rather than the soundboard side. Artists aren’t necessary expert on their subjects, especially if drawing from memory. Regency, however, it has been suggested that this belt or strap it was merely a way of keeping a lady's skirts down flat, which makes much more sense to me.
When writing my soon-to-be released novella, TheMatchmaking Game, I turned to A Young Lady’s Equestrian Manual, to double check the details I needed to write an accurate scene. when the hero helps the heroine mount her horse. Here is what I found:
The horse being thus left to the lady’s government, it is proper, that, in passing her hand through the reins she should not have suffered them to become so loose as to prevent her, when her hand is on the crutch, from having a light, but steady bearing on the bit, and thus keeping the horse to his position during the process of mounting.
She next places her left foot firmly in the right hand of the groom, or gentleman, in attendance who stoops to receive it. The lady then puts her left hand on his right shoulder; and, straightening her left knee, bears her weight on the assistant’s hand; which he gradually raises (rising, himself, at the same time) until she is seated on the saddle. During her elevation, she steadies, and even, if necessary, partly assists herself towards the saddle by her hands; one of which, it will be recollected, is placed on the crutch, and the other on her assistant’s shoulder. It is important that she should keep her foot firm and her knee straight. 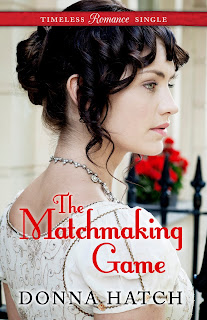 After ensuring I had my facts straight, I wrote my scene like this (this is when the hero and heroine, childhood friends, first realize there may be more between them than friendship):
How kind of you to notice,” she said dryly. “Give your major a leg up?”
With a smile at her reference to the honorary rank he’d given her at the ball, Evan dismounted. He laced his fingers together so she could mount her horse. A pert smile came his way before she placed her left foot in his cupped hands. She put one hand on his shoulder to steady herself as he boosted her up. Her soft body brushed his arm and chest. Her scent, something soft and feminine he could not name, tingled his senses. Mere inches away, her smooth cheek and moist lips taunted him. His chest squeezed and his knees wobbled. Awareness of her, of the desirable woman she had become, rendered him immobile. She glanced at him, one brow raised, and a half smile curving those luscious lips. A burning energy formed in the middle of his stomach and shot outward like sunbursts.
She parted those lips and spoke. “Am I too heavy for a big, strong man like you?”
“Er, no. Of course not.” He cleared his throat again and boosted her up with a bit too much force.
Despite his aggressive boost, she placed her right leg over the leg rest of the side saddle and found her balance. She settled the long, heavy skirts of her riding habit around her while he helped position her left foot in the stirrup.
With the reins in one hand and her riding crop in the other, she eyed him with an expectant lift to her brows. “Shall we?”
The Matchmaking Game will be released April 18, 2017 and is available now for pre-order here:


Sources:
Much of this information came through years of research. However, some recent sources are:
Shannon Donnelly on Historical Hussies
Jill Ottman on the Jane Austen Centre of North America
Kathy Blee on Ladies Ride Aside