Supper at a Regency Ball by Jenna Jaxon

In writing the next Regency in my Handful of Hearts series, I ended up having to research the suppers that were held at a ball. I made mention that Lady Hamilton’s suppers were “legendary,” so I had to do lots of research to find out what the norm was and then to top that.

Suppers at a ball were much more elaborate than a supper at a private party would be. At a ball everything must be breathtaking and perfect as it could possibly be, so hostesses would do everything possible to make their suppers elegant and unforgettable. The tables would be laid to exact specifications with the best china, silverware, and crystal being polished to blinding brightness.

Regency party goers made sure to eat dinner before leaving the house for the ball because supper at a ball could begin anywhere from 10:00 pm 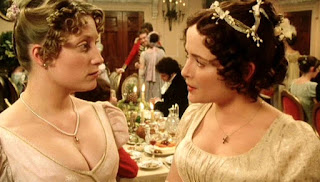 until 2:00am. The guests would have spent several hours either dancing or playing cards non-stop, so that some form of sustenance was certainly necessary. There are newspaper accounts that report one supper not beginning until 3:30 in the morning: “At half-past three o’clock the company sat down to a sumptuous banquet, the viands and wines being of the first description, with a desert of ices, strawberries, cherries, and grapes by Mr Gunter.” 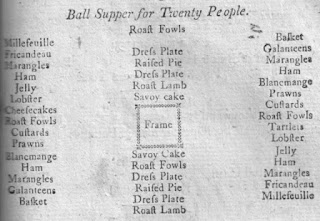 The bill of fare could be long and varied, depending on the wealth of the hostess. There were many dishes including white soup, cold meats, vegetables, fish, salads, fresh fruit, with deserts ranging from dry cake (unfrosted, like a pound cake), cheeses, cookies, pies, ices, and trifle. Champagne, white wine, sweet red wine, such as Madeira, coffee, tea, and lemonade might be served.

One of the most important things about supper for a young person on the marriage mart was that whichever gentleman was granted the last dance before supper automatically escorted his partner in to supper and sat with her, waiting on her, gathering dainty bits to tempt her appetite. This also meant the young lady sat with the gentleman and therefore got to talk to her throughout the entire supper. In a society where young ladies had little opportunity to speak to a man alone, this was a huge boon if one was trying to get to know the young lady or gentleman better. 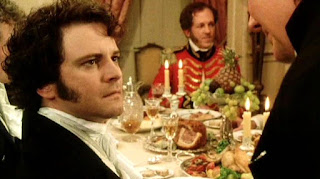 After supper the couples returned to the ball and danced until the wee hours of the morning. Of course, if the young lady had already danced twice with her supper partner, they could not dance together again and so the supper was their final bit of “alone time” for this particular ball.

Eating at midnight or beyond may seem strange to our modern sensibilities, until you think of heading home from a late movie or dancing at a club and grabbing pizza or a burger or ice cream on the way home.

Perhaps Regency suppers weren’t all that far off the mark after all.

Seems to me that these elaborate suppers were a lot more than a late-night pizza or a burger! 😏