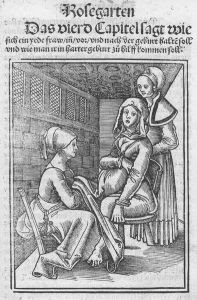 Childbirth during the Medieval period was viewed with great joy and great anxiety. Medical treatment was crude and usually ineffective, so it was probably for the best that childbirth was considered a woman’s domain and not a medical proceeding. Even so, the statistics show that one in three women died during their child-bearing years, most often from childbirth or postpartum complications of it.
Women in labor were attended by a midwife and her assistants, mid-wives in training, because the skill of midwifery was learned by experience only. As midwives were called on to baptize babies in case of impending death, a woman had to have the recommendation of her parish priest in order to begin her training.

In noble households a special lying-in chamber would be prepared months ahead of time. The best bed linens would be used and the floor would be strewn with fresh rushes mixed with sweet herbs. Once the labor began, the door of the chamber was shut and the windows blocked to keep light out. After the birth, mother and child remained in the lying-in chamber for a month.

In addition to the midwife and attendants, the laboring woman would have up to six female relatives or friends with her for comfort and encouragement. Remember, girls during this period were married at 12 or 14, so often the laboring mother was a child herself by our standards. With no type of anesthesia to ease the pains, save oil rubbed on the belly by the midwife, the presence of other women who had gone through the ordeal and lived to tell the tale were probably welcomed by the mother-to-be.

Women in labor often used a birthing chair with a horseshoe-shaped seat, allowing the midwife easy access to her and taking advantage of the slight help gravity provided. According to Melissa Snell, “Birth was usually expected within 20 contractions; if it took longer, everyone in the household might try to help it along by opening cupboards and drawers, unlocking chests, untying knots, or even shooting an arrow into the air. All of these acts were symbolic of opening the womb.” Often charms, such as the gemstone jasper, credited with child-birthing powers, or a cranes’ foot were used to assist in difficult births.

After a successful birth, the umbilical cord would be tied and cut at four fingers’ length.

The child would be washed in warm water, or milk or wine if the house was affluent. Its gums would be rubbed with honey to give the babe an appetite and it would be wrapped in swaddling cloths to make its limbs grow straight. These cloths were changed every three hours. 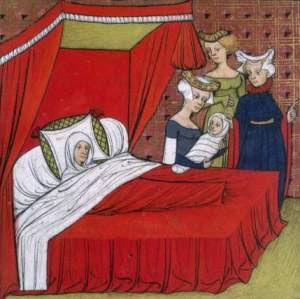 Despite the pain and suffering of childbirth, it was a natural and expected occurrence. Women, then as well as now, looked forward to the blessed event with both fear and anticipation, hoping for a job well and swiftly done.

Sources:
“The Medieval Child: Part 2, Entry Into the Medieval World,” by Melissa Snell
“The Midwife at Work,” by Lupita Diaz