This past summer I was fortunate enough to visit Bath for three days to do some sight seeing and soak up the local color for the Regency historicals I am writing. At the time I was actually finishing up a story for the Yuletide Happily Ever After II anthology called It Happened at Christmas. And where do you think the story is set? 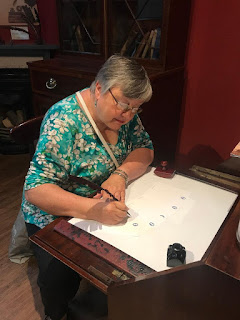 So I walked all over the town. I got to walk to the Royal Crescent, (and take a picture of No. 12 where the hero of my story lived), I visited the Jane Austen Center and spent a lovely afternoon there (writing with quill and ink, no less!), but my biggest thrill was visiting the Upper Assembly Rooms and especially the ballroom! As I walked in I was aware as never before how close in time we are to the past. I was looking at the same walls, the same chandeliers, the same alcoves as Jane Austen did two centuries ago. The same room I wrote about and my 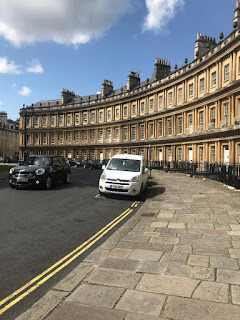 characters danced in two nights ago. I must admit I had a bit of a fan-girl moment—for a room!

The Upper Assembly Rooms began to be a “thing” in Georgian England. They were completed by John Wood in 1771 with the building shaped like a huge U, the ball room on one side, connected by an octagonal room, with the tea room opposite and an octagonal room connecting them on one end. Unfortunately, the Upper Assembly Rooms were pretty much passe by the time the Regency came into bloom, although a lot of very fashionable folk still came to take the waters and see and be seen. 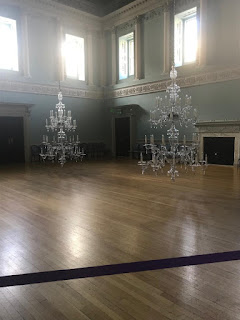 The Tea Room was used as a refreshment room, where the most popular beverage was, in fact, tea. Concerts were held there on Wednesdays. The Octagonal Room was for cards and gambling.

The Bath Season ran from October through early June, at which point everyone who had a country estate retired to it to escape the heat.

I hope you’ve enjoyed my little tour down memory lane, walking through Bath an soaking up the history.