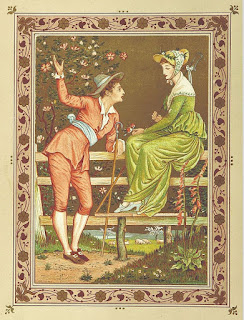 As a romance author and hopeless romantic, I cannot possibly ignore Valentine’s Day. I admit, until I started researching the topic, I really didn't know the real history behind Valentine’s day except it was to honor a Christian named Valentine who was martyred for marrying people in secret. Which really didn't make sense to me. Was he martyred because he was Christian? Or because he was marrying people? To my surprise, I found the answer to be a bit of both. Maybe. Although no one really sure who, exactly the famous Valentine actually was. And much is couched in myth and speculation. However, here's some fun history, sprinkled liberally with legend.

This much appears to be factual: In Rome 270 C.E. the Emperor Claudius II put out an edict saying no man could marry. Ever.

Talk about a stupid law!!!! No marriage? At all? And sex outside of marriage was considered to "prostitution" which was illegal. Talk about a bunch of unhappy people. And how were children to be brought into the world? Did he think it was okay for his entire country to become extinct in a single generation? Clearly, this brainless emperor didn’t think that one through.

But he apparently did have a reason for it. He felt that marriage made men "soft" and therefore unreliable soldiers. Men wouldn’t want to leave his wife and child AND die for his country, and because Emperor Claudius needed a massive army to maintain his vast empire. So, he outlawed marriage. Clearly he wasn't worried about becoming unpopular with his crazy law nor having a country peopled with soldiers for his posterity.

nto this confusing chaos steps Valentine, the Bishop of Interamna, who invited all young lovers to come secretly marry and, in turn, converted quite a few people to Christianity. Clearly this man was intelligent – much smarter than the Emperor because while getting his way of converting people to Christianity, he also saw to the needs of disgruntled lovers. Aw, isn’t that sweet?

Or it might have been a ploy to convert heathens. Either way, the Emperor inevitably found out, and had Valentine arrested.

The odd thing is, Valentine may not have been condemned for going against the Emperor's edict. Some accounts suggest it was because he refused to renounce Christianity and convert to Roman ways AND even attempted to convert the Emperor to Christianity. Talk about pluck! According to legend, while Valentine was awaiting execution, he befriended a girl who was the blind daughter of the jailer. While in jail, Valentine restored her eyesight through his faith. Some people believe he fell in love with her. Then he supposedly wrote her a farewell letter on the day that he was stoned (or beaten, according to some sources) and then beheaded. Another account reports he simply died in prison, probably of typhus, or gaol (jail) fever. At any rate, Valentine reportedly signed his love letter, "FROM YOUR VALENTINE."

We have been using his name, and even that phrase, ever since.

Also, there appears to have been anywhere from three to seven men who bore that name and were martyred, or died while in service to the church. Apparently one helped a number of Christians escape prison where they were being beaten and tortured. This Valentine was caught and executed. Another Valentine was a missionary in Africa, but little is known about him. Or, it’s possible, they were all the same men, but accounts of his death have been muddied. However, we do know that Valentinus, or Valentine, was a very common Roman name.

Though the marrying Valentine was executed on February 24, (according to some sources, anyway) 270, the Christian church chose to honor him and all the Valentines – who all supposedly died on or near February 14 – on February 14th because they wanted to replace a Roman rite of passage to the God of Lupercus. Part of the festival included men running around and slapping young women with a strap dipped in blood with the idea it was supposed to make them fertile. Another practice in that festival involved putting the names of virgins in a box (I wonder if they were willing or unwilling?) and drawn by not so virginal men (ARE there any virginal men?) in a lottery. Whichever girl was drawn was then assigned to "pleasure" the lucky man until the next lottery, which was a year later. (poor girl!!!) Sounds like a premise for a book, doesn’t it?

Anyway, the church was appalled by this pagan holiday (I don't blame them) so they chose to substitute it with a close second. Well, okay, maybe by the men’s standards it wasn’t such a close substitute. But Valentine’s Day appealed to the love aspect of the ritual instead of sex. I’m sorta surprised the men went for it, men being what they are. But I guess pleasing his wife, or the girl whom he hopes will be his wife someday, in the hopes he’ll get lucky (ahem) was the best substitute a good Christian man could hope for. 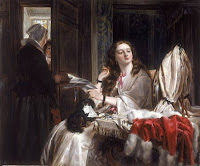 So, happy Valentine's day! And be grateful we aren't Roman!!!
Posted by Donna Hatch at 12:01 AM

What an interesting post! I knew about St. Valentine, but not about those others, or the confusion about who was who. I sorta like the guy who sent the Valentine, even though he died a gruesome death. Wonder how the cupids and the bow got connected with Valentines. Well, maybe tell us that next year.

Thanks, Joyce. I did run into the whole cupids and arrows thing, but chose not to elaborate lest this post be a mile long. As you said, next year!

Thanks so much for teling this!
Its so good to know the real story and traditins.
Love has so many facets, many are not sexual.
The gods and goddesses of love are usually sluts!
it makes you wonder when monagamy caught on. LOL
This post is terrific!
jen