London Bridge, Then and Now

London Bridge has been an icon of England for centuries. But did you know that the London Bridge of today is not the same bridge of ancient construction? The Roman Empire built the original London Bridge which spanned the Thames River, constructed of wood and built on piers. The timber construction had to be repaired and replaced periodically.

Between 1176 and 1209, Peter of Colechurch replaced the timber bridge with a stone arched bridge. It stood for over 600 years. It provided a major thoroughfare, a business center, and even a source of amusement for thrill-seekers.

According to Encyclopedia Brittanica:  As a result of obstructions encountered during pile driving, the span of the constructed arches actually varied from 15 to 34 feet (5 to 10 metres). In addition, the width of the protective starlings was so great that the total waterway was reduced to a quarter of its original width, and the tide roared through the narrow archways like a millrace. “Shooting the bridge” in a small boat became one of the thrills of Londoners.


It was also on this bridge that a gruesome display of severed heads of traitors served as warning of punishment for treason. One of these included the famous rebel, William Wallace. Thankfully, this ghastly practice of heads on spikes along London Bridge ended in 1660 during the reign of King Charles II.

Since the bridge, the only one spanning the river at that time, was a bustling roadway, the new stone bridge soon became a coveted site of businesses and homes. Shops lined both sides of the street, and a number of passageways leading from one building to the next created a tunnel-like shopping and residential district.

However, this heyday would not last. In fact, it almost seems as though the bridge was cursed, suffering a massive fire, a collapse, the removal of the homes and business, erosion, and sinking. (No wonder children sing a song about "London Bridge is falling down.") Each time, the intrepid British rebuilt the bridge. 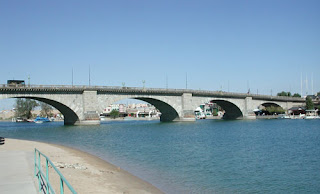 In 1971 the new, box girder bridge of concrete and steel took its place. Oddly enough, rather than simply destroying the bridge, the Common Council of the City of London found a buyer. American entrepreneur Robert P. McCulloch purchased the stone arch bridge in 1968 for a staggering $2,460,000!

Each block was numbered before dismantling and then shipped to Lake Havasu City, Arizona in the U.S., over 5400 miles from London. There it was painstakingly reassembled. Lake Havasu City rededicated London Bridge in a ceremony on October 10, 1971. The New London Bridge spans Lake Havasu behind Parker Dam on the Colorado River.

Next to the Grand Canyon, London Bridge is Arizona's largest tourist attraction, and a charming tourist community sprang up around the historic structure. As a history geek, I, for one, am happy the 600 year-old bridge has a new home where it is preserved and appreciated.