What Did Regency People Name Their Pet Ducks? 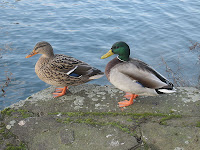 In my Regency comedy romance, An Inheritance for the Birds, the "birds" in the title are mallard ducks.

Why ducks? Well, I like ducks. They're very pretty birds and they're large enough to see easily. I selected mallards because they're the most widespread ducks in the northern hemisphere and would be common in Regency England. Also, I feel sorry for them. We take mallards for granted because they're all over, but they're among the best looking of the ducks. And I like their "quack".

An Inheritance for the Birds is a variation on the theme of the elderly lady willing her possessions to her cats. Duck nut that I am, I substituted ducks. In my twist on the story, the hero and heroine must compete to win an inheritance. Their task: make the deceased lady's pet ducks happy.

There are fourteen ducks in the story.

The hens are:
Felizarda, Albina, Esmeralda, Horatia, Urania and Dulcibella

Note that there are eight drakes and six hens. Among the brightly colored ducks in the wild, the spectacular-looking drakes are more plentiful than the drab brown hens. Just think, all those avian hotties competing for the erstwhile hens' attention. A female heaven.

I took most of the names from Regency historical romance author Jo Beverley's list of names common in the Georgian and Regency eras (http://www.jobev.com/regname.html). The names may have been common then, but they sound a little odd to our ears.

the ducks a little more, Ulrick and Urania are mates, Thaddeus and Theodore are brothers, and the heroine beans Felizarda with a piece of bread (accidentally, of course) when she feeds them.

The duck stars are Obadiah, who likes the hero, and Esmeralda, who doesn't. The others add their quacking chorus to the comedy.

I love my ducks. What do you think of the names I selected?

An Inheritance for the Birds, available at The Wild Rose Press, Amazon, Barnes and Noble, All Romance Ebooks and other places where ebooks are sold. .
Posted by Linda Banche at 10:01 AM 5 comments:

Email ThisBlogThis!Share to TwitterShare to FacebookShare to Pinterest
Labels: An Inheritance for the Birds, duck names, Ducks, English Regency, Linda Banche, What Did Regency People Name Their Pet Ducks? 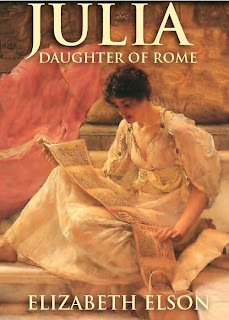 Because my books begin in Caesar's time and go through the fourteenth century, I'm fascinated by how fashions changed through the centuries, and research for my historical novels has turned into a fun and time-consuming hobby.
The Roman Republic was heavily influenced by Greek culture, in everything from its literature to architecture and fashions. Much of our knowledge of early clothing comes to us from works of art, salvaged in part from archeological digs, and now residing in museums all over the world.
The standard Roman garment was the tunic, commonly called the T-tunic as its cut was basically the shape of a T. Over the tunic, men wore their togas, if they went to the Forum. Commoners usually wore plain brown tunics of wool. Yes, even in the summer, but their wool was not what ours is today. Rather it was a soft weave and could be worn in the summer. Patricians or nobles wore garments of linen and silk, usually ornamented with a band (or bands) to denote their office or status.
The cover of my first ebook shows what kind of modified Greek-style garment may have been worn by Roman patricians during Julia's time. The cover represents Julia well because she loved poetry, as did her lover, Marc Anthony's son. I wrote this novel under a nom de plume, Elizabeth Elson. It's now available at online retailers for kindle, nook, and other ereaders. During Read An Ebook week, (March 4th through March 10th) Smashwords is running a promotional, and Julia's story is available for a 25% discount only on the Smashwords site and using the discount code, REW25.

If you want to read further about period clothing, there's an interesting website, with terms and careful description of articles of clothing, here .
Posted by Joyce Moore at 5:02 AM 1 comment:

The London Season began when titled lords came to London to attend Session of the House of Lords which coincided with Parliament. They typically met in October, November, December and then again in January through about April or so. There was really no set schedule, as far as I can see although the Queen held her birthday ball in January.Often the gentlemen came alone, but many probably preferred to bring their families, who then needed entertainment, and thus the Season came into being.

Since London was an undesirable place to live year-round, many would not come to London from their country houses until after Easter when the weather was better. The London Season generally ran from after Easter to June or July, after which most would return to their country estates. Some people lived in London all year round, except for brief visits to other houses. Later, under Queen Victoria, the Season became more definite and the whole debutante thing was formalized.

During the Regency Era, the Season usually included lavish balls, parties, dinners, and musicales. London also offered many other attractions; the zoo, many parks, museums, shopping, and other entertainment. The Season grew into an important part of meeting and marrying eligible gentlemen and ladies.

The season became a much bigger production after the Regency Era and really came into prominence in the late Nineteenth century, or the Victorian days. Still, the Season figures prominently in many Regency Historical Romance novels, including mine, since it was a time to bring together all the noble families and their children of marriageable age. This of course, invites all kinds of delicious possibilities.