An Unlikely Sport for Gentlemen: Boxing in the Regency Era by Jenna Jaxon

When thinking of gentleman-like sports of the Regency era, one may immediately think of shooting, hunting, riding, racing as being cultured and likely to be attended by the well-dressed and well-mannered men of the Regency. However, one not so refined sport that took the period by storm was, surprisingly, boxing. 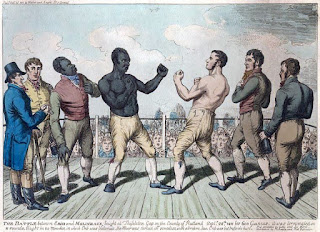 Boxing as sport in England had begun in the 17th century, a bare-knuckle free-for-all termed prizefighting. The first champion of this form of the sport was James Figg in1719, a time when the term “boxing” first began to be used. As may be expected, these fight had no rules to them and included pummeling, punching, headbutting, eye-gouging, and choke-holds. From this sort of melee in 1743 a few rules emerged, such as no hitting below the belt and a count of thirty to determine when a fight was over. One of the most successful boxers of the Regency was “Gentleman” John Jackson, son of a builder turned prizefighter. He fought in three fights, losing only one, then retired to create a boxing academy, teaching gentlemen to fight in his rooms at 13 Bond 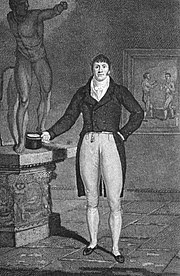 Street, London. He created rules for his fighters, including the outlawing of kicking and hair holding, making the sport more gentleman-like. He also helped make the bouts safer, although bouts could go on for 50 rounds and were usually fought bare handed. In 1814 Jackson opened the Pugilistic Club, an organization that took subscriptions for fights and sponsored fights several times a year. He worked to keep the sport honest. Many gentlemen of the nobility took lessons from Jackson, although his clientele tended to bet on fights rather than participate in them. Still, boxing gave gentlemen of the ton the opportunity for strenuous exercise, a way to defend themselves without a weapon, and a reputation for being manly. In my upcoming Christmas novella, It Happened Under the Mistletoe, two gentlemen use this method to settle their grievous differences. It Happened Under the Mistletoe will be releasing in mid-November! Look for a cover reveal later this week!
Posted by Jenna at 3:09 AM 1 comment: