With Valentine’s Day fast approaching, and with me having just celebrated the new covers on my medieval series of novellas, I thought it only apropos for me to do an article on medieval tokens of love. If you thought the medieval courtiers weren’t particularly romantic, think again!
Throughout the Middle Ages people in love exchanged gifts to celebrate their feelings, just as we do today. Some tokens have continued down to our time, while others might seem rather odd to our modern sensibilities. 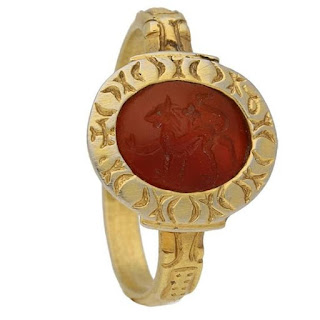 One love token that is still being given today is jewelry, especially rings. Rings would be given certainly as part of betrothal or wedding celebrations, but could be given on less formal occasions to express affection. Rings could be made of gold or silver and set with precious stones or they could be made of simpler materials, such as bone or glass. Many times these tokens were inscribed with some sentiment from one lover to another.

Another piece of jewelry often exchanged between lovers that isn’t all that unfamiliar to our modern eyes is the brooch. A beautiful, yet 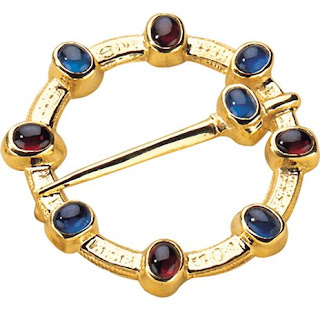 practical gift, the brooch showed off the wealth of the giver (and the depth of their regard as well), while it assisted the receiver in pinning a cloak together or fastening a garment.

An interesting custom for people of less wealthy means was the giving of miniature items that they could not afford. These token would probably have looked like modern day charms and might have included everything they would have seen wealthy couples exchange, such as purses, shoes, chaplets, or jewelry boxes.

When a medieval lady wished to bestow a favor on her knight of choice before a joust, she would give him a token that would mark him as her chosen courtier. Items that were easily detached, such as sleeves or a scarf, or fluttery, such as a handkerchief or ribbon would signal that he was her particular champion.

And a final token that would be considered somewhat different today is a casket, or box, usually carved in an intricate fashion, perhaps with scenes of lovers imprinted all about it. These boxes could hold jewelry, other trinkets, or something more personal, like a lock of a loved one’s hair. 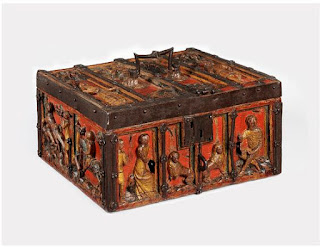 So this Valentine’s Day, don’t say it with flowers, say it with a casket or a sleeve, something a medieval lady or knight would cherish forever.

Watching The World Go By

It's interesting to think of how many Westerns I've read over the years, set in the 1880's and 1890's, that I never give much thought to what the characters would've seen if they lived to a healthy old age. Then I think back to actual family members who lived during that time period. For instance, the woman I am named after, Sallie Britton Lary. She's that pretty lady on the right. Aren't old pictures wonderful? You can see where the photographer went in and traced a few details to make the photograph look "better."

I often wonder if I could write a story based on this woman's life. She was born in 1873, in the golden age of cowboys and train robberies. She married when she was in her twenties - and how many novels take place in the 1890's? Absolutely perfect.

During this woman's childhood, her family picked up and moved from one side of Texas to another. They traveled by wagon train, and Sallie's family was at the back and fell behind. Which turned out to be a good thing, as the front of the train was attacked by Native Americans.

Sallie lived to be 93 years old. That means she lived in an era of Native American wars all the way through watching on television as the first man went to the moon. She saw cattle lands turn to cities, buggies into cars, and planes. The miracle of television never ceased to hold wonder for her.

Next time you read a novel based in the late 1800's, consider those characters and how the changing world would've impacted them. From horses to convertibles, from gramophones to the silver screen, and two World Wars.

I hope you don't mind me sharing a piece of family history. Truthfully, my stories can be inspired by what little I know of these people who came before me.

Sally Britton is the author of several Regency romance novels. Her work can be found at Amazon.com.
Posted by Sally Britton at 5:30 AM No comments: