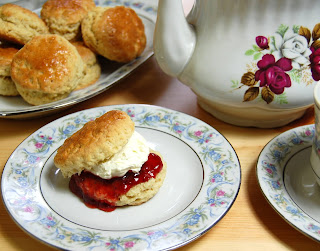 Nothing is more quintessentially British like afternoon tea. While most of us may think of afternoon tea as an upper lass tradition dating back hundreds of years, I discovered something else entirely; it's relatively new. In fact, High Tea as we know it has only been around for about a hundred and fifty years.

First, we must travel back to the sixteen hundreds, when King Charles II’s Portuguese bride, Catherine, brought a cask of it along with her dowry. She unwittingly started a new fashion--afternoon tea. However, tea came largely from the Orient, so it was expensive. Therefore, only the rich could afford tea until larger amounts began to be imported, resulting in lowered prices. Still, tea in the afternoon didn't become common until the 1700's. Thomas Garraway introduced tea in his London coffee house claiming tea had medicinal qualities with this advertisement:: “This excellent beverage, recommended by all Chinese doctors, and which the Chinese call ‘Tcha’, other nations ‘Tay’ or ‘Tee’, is on sale at Sultaness Mead close to the Royal Exchange in London.” (Le Palais des Thes)

By the Regency Era, the custom had long-since caught on and the upper class had afternoon tea about four o’clock, which was before the fashionable time to promenade in Hyde Park if one resided in London. Afternoon tea included, of course, tea served hot. In addition to tea, one might find any of these tasty treats: small finger sandwiches (thin and crust-less, thank you), biscuits (which the Americans call cookies), seedcake, macarons, and small cakes sometimes called fairy cakes with butter icing which were about the size of mini cupcakes. Regency tea did traditionally include petite fours but with macarons available, that would suit me just fine. There has been much discussion among Regency enthusiasts as to whether scones with jam and clotted cream (also known as Devonshire cream) were served during the Regency or if that became more common during the Victorian era when High Tea became such a grand affair. Without a time machine, one may never know.

Food with tea probably evolved because the upper classes ate dinner at the fashionable time of about eight o’clock at night, and since many had not yet adopted the custom of luncheon or nuncheon, they probably needed that small meal in the middle of the day. Personally, I like a small meal in the afternoon even though I do eat lunch. I would have made a great hobbit with the custom of eating "elevensies" and lunch and afternoon tea, etc. But I digress.

“High Tea” developed during the Victorian era. Some accounts say that high tea, served later in the day at about five or six o’clock, originated with the lower classes but I don’t understand how they could come home from work for high tea and then return to work for a few hours and then go home again for dinner. *shrug* Plus, tea was expensive so not many of the lower classes could afford it.

At any rate, High Tea is a more filling meal than afternoon tea. High tea usually comes with white and brown bread, meats such as roast pork, fish like salmon, scones, an assortment of sweets such as cake pie, trifle, lemon-cheese tarts, sponge cake, walnut cake, chocolate roll, pound cake, currant teacake, curd tart, a variety of cheeses, jellies, as well as butter or clotted cream. In addition, the term High Tea comes from how and where the guests are seated. According to Laura Boyl in her article "Tea Time" on the Jane Austen website: the different names are derived from the height of the tables where the meals were served. Low tea is served on a table, which in the United States would be called “coffee tables.” High tea is served on the dinner table. 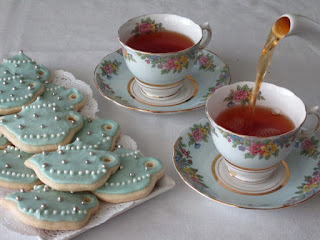 Because the characters in my Regency romance novels all hail from the upper class, or end up there eventually, I will focus on Regency afternoon tea because that's what they do every day, unless they are fighting pirates or running for their lives or battling villains, of course.

Tea was (and still is, sometimes) served in a china or silver pot accompanied by slices of lemon or milk. They never put cream in their tea or it ruined the flavor. According to Regency researcher and author, Kathryn Kane, tea leaves used during the Regency were chopped much more coarsely than those used today. The large size required that the tea be steeped for a longer period, but it also made it easier to strain the used leaves from the tea after it had been steeped. There was a special implement included in many tea services used to clear the strainer at the base of the spout of the teapot or to strain the used leaves out of each cup before it was served. You can find more details at: http://regencyredingote.wordpress.com/2013/11/08/the-mote-skimmer-a-specialty-tea-accessory/

However, Regency author Grace Kone, who is British, told me that if it's done correctly, the tea leaves stay on the bottom, with just enough pouring out to make a scattering of leaves for fortune-telling. (It sounds very Harry Potter, doesn't it?) Grace said she has never in her life strained leaf tea. Other British friends such as author Janis Susan May Patterson use a tea ball, which is a small metal case into which she places the tea leaves. These are also known as 'tea eggs.' Other British friends pour their tea into their cups through a silver tea strainer.

1. Slice the cucumbers very thin. Put them in a colander mixed up with some salt, weigh them down with a plate, and leave them in the sink to drain for an hour or two.

2. Wash the salt off and pat dry with a dishtowel.

4. Put two layers of cucumber slices in each sandwich and press flat with your hand so it all sticks together, preferably without becoming totally squashed.

5. Cut off the crusts (very important). With a big sharp knife cut each sandwich into four – triangles, squares, or strips, your preference.

Me, again. After some trial and error, I decided I like cream cheese instead of butter, but that is a modern substitution.

Here is another tea party must (at least in my opinion)--macarons. From “The Royal Pavilion at Brighton a booklet A Choice Selection of Regency Recipes you can now make at Home” here is a recipe for macarons. 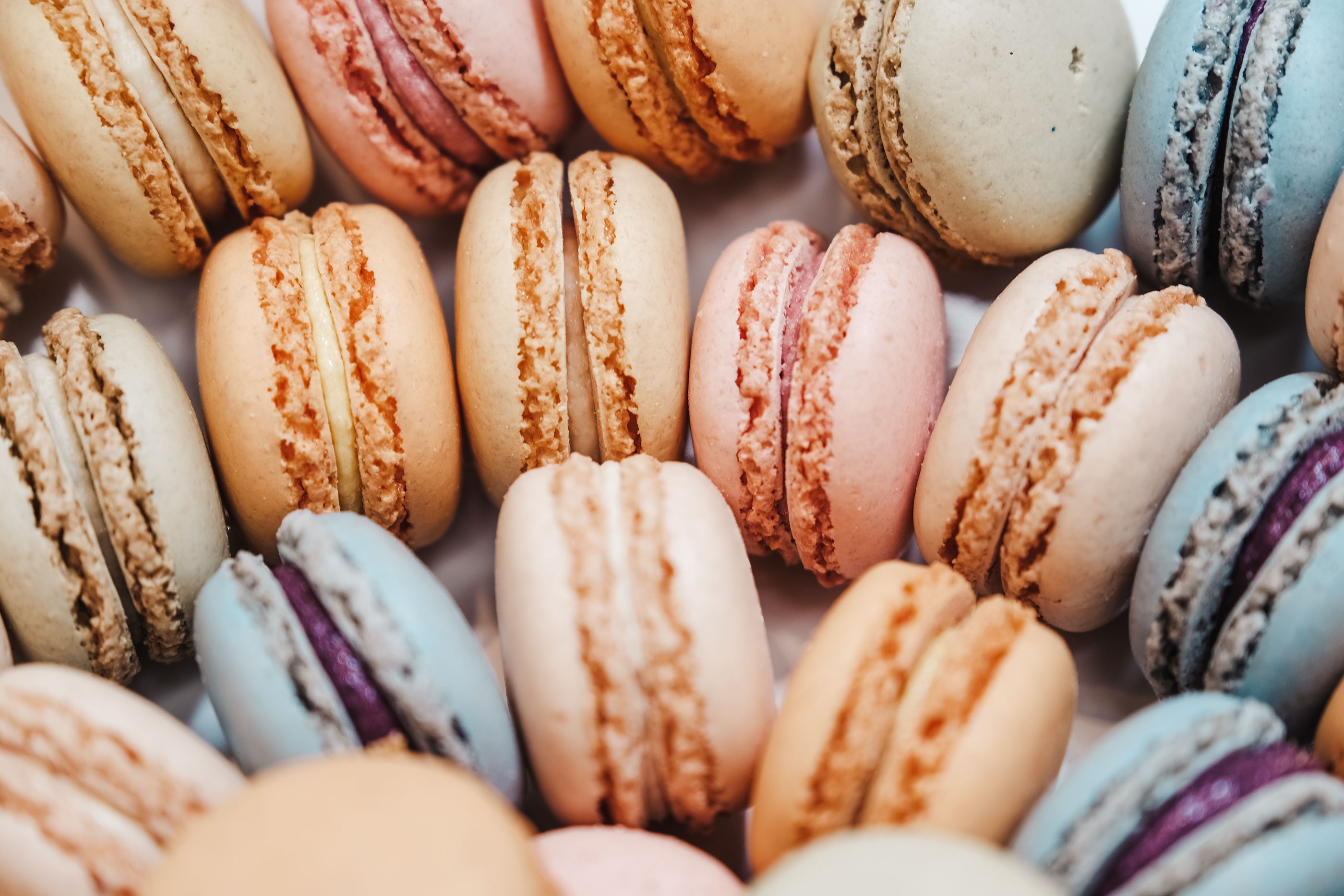 Line a baking sheet with baking parchment paper. Whisk the egg white until stiff. Using a large metal spoon, fold in ground almonds, sugar, rosewater (or your choice of flavoring), and almond essence.  Mix until blended into a smooth thick paste.

Using a teaspoon, put blobs of the mixture on the lined baking sheet, leaving space between them to allow for expansion during cooking. Flatten with the back of a spoon. If you like you can top each with a sliver of almond.  Bake for about 20 minutes until light golden brown. Transfer to wire rack and leave to cool. Makes about 12.

Trust me, these are delicious. I prefer to make them the modern way with a dab of buttercream frosting in the middle of two so they make a sandwich cookie, but they're tasty plain.

I’m not a traditional tea drinker because I don't use caffeine, so I deviate with herbal tea in my cup and I like to add a little honey. But you can use any preferred tea and any desired sweetener. The use of a pretty teacup and the fun finger foods is what it's all about.

Having Afternoon Tea is great fun. I think my next party will be a tea party. Recently, I discovered wearing a tea party hat adds to the atmosphere. Have you ever attended or hosted a tea party?

To Dye For: Hair Dye in the 18th Century by Jenna Jaxon 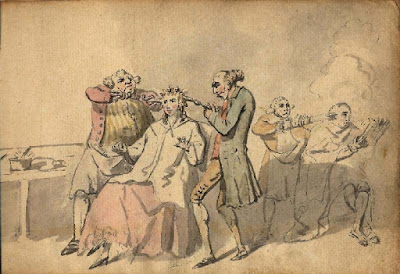 Hair dye seems to be one of the most common place attempts at beauty and has been so for thousands of years. The ancient Egyptians tinkered with ways to color their hair, as have most cultures ever since. So it is not surprising to learn that women in the 18th century also used hair dye as part of their cosmetic arsenal.

Some civilizations used plant based dyes: henna, indigo, senna, black walnut hulls, red ochre, and leeks. These dyes did not last very long, but were relatively safe to use. The Romans were quite fond of dying their hair. Women would dye their hair red, imitating the Gallic traders they had seen. For a time Roman prostitutes were required to dye their hair blond (however the color became so popular, eventually they stopped because too many women who weren’t prostitutes had blond hair as well).

Unfortunately, in the 18th century, the means used to color hair could be the death of you. Re-discovered ancient Roman formulas for hair dye in the 18th century in Europe meant people began using lead to dye hair to cover the gray. They used a lead oxide to color hair black and chestnut colors, which was of course rather toxic. High levels of lead, absorbed through the scalp, would put a person in a coma and lead could lead to death. 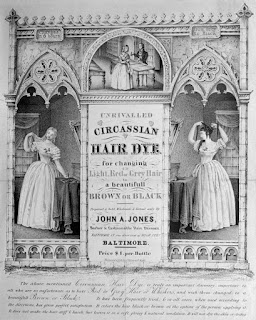 Another toxic compound used to color black hair chestnut brown was Oyle of Virtiol, what we could call sulfuric acid. In the 1700s in Italy, women would bleach their hair by sitting in the sun and having their hair drenched in lye to lighten it.

Women would also lighten their hair by using a mixture of honey, wood ash, and lye soap mixed together and applied to the hair. 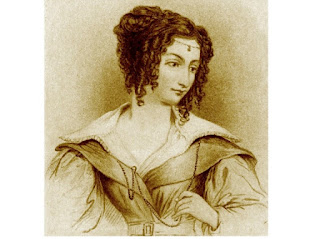 None of these methods, save for the non-permanent vegetable dyes, were safe in any way. All of them could cause skin irritation, burning of the skin, and in the case of lead, could lead to death.

In my upcoming release, Only Pleasure Will Do, we discover the heroine has been disguising her appearance for years using a 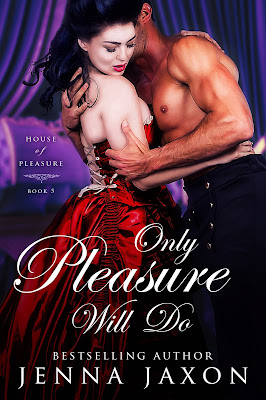 mixture of crushed black walnut hulls to color her hair, which led me to researching all the ways an 18th century woman could color her hair. Only Pleasure Will Do, which will release on August 31, is on pre-order on Amazon, and if you want a preview of the book, I’ve also released the prologue to the book, titled A Matter of Pleasure. A Matter of Pleasure is available on Amazon for .99 and is Free on Smashwords.
Posted by Jenna at 12:38 AM 3 comments: