When I was in elementary school, I was absolutely obsessed with Native Americans and discovered several instances where a white child was abducted and/or raised by them. This particular story (ca.  1880s) is from my family's history and I thought it would be fun to share, especially since it includes some interesting details.

Mary Catherine Jolley and her husband, James Blazzard, lived in Glendale, a few miles up Long Valley from Mount Carmel. They were hospitable people, often feeding the Indians as well as other passers by. Following is the story as told by Mary Catherine Jolley Blazzard. “I did not mind, even when Jim brought home old Choog, a reprobated Indian, almost mortally ill. We made him a bed of sacks and camp quilts in the lean-to shed. We nursed him back to life, not begrudging him a share of our food and shelter.” “We lived in Glendale until we had three babies. Jim had been talking about our moving to Arizona, but when I was about five months along with the third child, Wes, a sorrowful tragedy occurred and all else was forgotten. Little Mary Ann was playing in the doorway one minute and the next minute she could not be found.” “In the heart breaking days that followed, I could not be comforted by my second child, Jimmie, nor by the thoughts of the expecting baby. All I could think of was my little Mary Ann in her blue pinafore, her bright pigtails hanging over her shoulders.” “Tracks of Indian ponies were found leading out of the river, and it was thought that the indians had stolen our little girl to sell to another tribe. The hunt continued far and wide for traces of the child, but it was to no avail. Scouts were sent out from Salt Lake City, but the search was futile.” “More than a year had passed, during which time all of Southern Utah had kept on the outlook. Jim and I decided to move to Arizona with the next covered wagon train, in the company of Andrew Gibbons who later married Nancy Nobles. In this company were to be ten adults, at least eleven children, six wagons, twenty horses, besides a few head of cows and calves.” “Your pa and I one the last night, sat in front of the fire, half in the dark, thinking about the move, and thinking of our lost baby.” “Suddenly a dark face was pressed against the window. I screamed in terror, while Jim crouched in readiness by the window. I dragged Jimmy back behind the bed, out of sight. Then unexpectedly there came a tapping at the door: One, One-two; One, One-two; One, One-two.” “That is old Choog’s knock Jim! The one he used when he was here sick.” “Jim crawled toward the door, and signaled back, then slid the bolt expecting Choog to come in, but instead the Indian thrust a small Indian child through the door. Me bring you Indian Papoose, he said, then disappeared into the dark.” “There stood a little Indian girl, in ragged clothing with tangled hair, looking from one to the other with blinking eyes.” “He’s brought us an Indian child to take the place of ours! I don’t want an Indian child. She can’t take the place of ours! I bet she is lousy, too. Go call him back, and make him take her!” “Jim hunted around outside, but Choog had gone for good.” “We’ll have to keep her overnight. We’ll comb her hair out with coal-oil, heat water on the fireplace and bath her and let her sleep in one of Mary Ann’s clean night gowns. We’ll put her clothing outside the house for the night.” “ As a last thing, I started braiding her hair. All this time the child stood silent, and stoical. Now as I combed through the hair on her neck, the comb caught and she put her hand to the back of her neck. I looked closer to see what had obstructed the comb.” “Jim, come here! Look at this! Then I tumbled over on the floor. Jim lifted me onto the bed and bathed my face in cool water until I revived. What is the matter, my Girl?” “I parted the child’s hair, and there at the edge of the neck was the long dark mole! Mary Ann’s birthmark. Jim held the lamp close to her face. Her eyes were blue. We knew the little Indian girl was Mary Ann, stained brown with wild berries, her hair dyed black with walnut bark.” “Mary Ann, have you forgotten how to talk? Have you forgotten your mother and father?” “I sat rocking the child back and forth, while Jim tried to induce her to talk.’ “I thought her hair felt finer when I was combing the coal-oil through it, than any I have ever felt on an Indian.” “Look, the dye was worn off her armpits. She was white under her arms.” “It won’t take the dye many weeks to wear off. The Indians keep it renewed every day or two, after they steal a white child. We carried her over to the bed, and showed her the little brother. When she saw Jimmy she started to cry, and commenced a jargon we could not understand. It took us an hour to quiet her.” “They made her talk “Indian talk, Jim told me.” “The news of Mary Ann’s restoration spread rapidly up and down Long Valley. The settlers crowded around to see her and to discuss the circumstances surrounding her return to her parents.” “They were all agreed that Choog himself had not stolen her, but that he had rescued her for us because we had taken care of him when he was sick.” “Overjoyed with Mary Ann’s return, we lovingly called her, ‘Our little Indian girl,’ as we strove to become acquainted with her all over again.”

Women of the American Revolution

With the 4th of July upon us, I thought I would write today about the seldom-sung women who participated in various ways in the Revolutionary War.

Very few women have been given credit for the roles they played in the War for Independence, something that has begun to be corrected. They may not have been the Founding Fathers, but in many ways they ere the Founding Mothers, women whose patriotism led them to serve in both usual and unusual roles during the conflict with England. 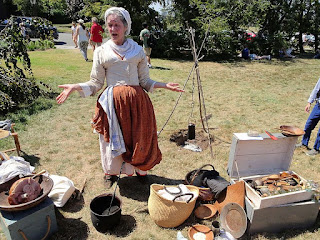 Most of the women who served were simply women who followed their husbands onto the battlefields to perform the usual tasks assigned to women: laundresses, cooks, and nurses. These women, called camp followers, accompanied their husbands who were serving in the army. They would do their husband’s laundry and sometimes were also paid by other soldiers to do their laundry as well.

As the soldiers usually cooked for themselves, a woman might cook for her husband alone, or might be paid to cook for the retainers for the camp: blacksmiths, wheelwrights, express riders. They were paid small sums for this service, from 2 shillings a day to $10.00 a month.

Women also served as nurses, another traditional role. The position provided steady income and rations but was fraught with peril in the form of risk of diseases such as smallpox and fevers. The chores—anything from washing the patients, to emptying chamber pots, to assisting the surgeons—were some of the dirtiest jobs available.

Some women were documented as actually serving in the capacity as soldiers. Several wives, working alongside their husbands during the conflict 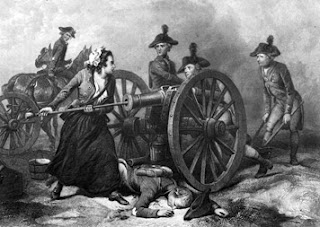 would take up the job if their husband became wounded or killed. Two of these were Mary Ludwig Hays McCauley and Margaret Corbin. Both were married to Continental soldiers in the artillery. When their husbands became wounded, they stepped in and continued to assist in the firing of the cannons.

Other women actually dressed as men and fought side by side with the other soldiers. The most notable of these was Deborah Sampson Gannet enlisted using her deceased brother’s name, Robert Shurtliff. She fought for several years and was wounded twice. When her identity was discovered, she was honorably discharged and given a pension.

Women still continue to serve their country in these and many other capacities in the military today. May we remember them all and thank them for their service.

References:
Danyluk, Kaia. “Women’s Service with the Revolutionary Army.” Colonial Williamsburg E-Newsletter.
“Women in the American Revolution: On the home front and on the battlefield.” American Battlefield
Trust.