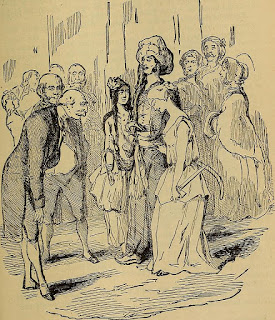 Although the first entertainment one usually thinks of when talking of the Regency period is usually a ball, musical evening, cards, or dance assembly, there were actually many other forms of amusement Regency men and women engaged in. When having an intimate night at home or at a house party with myriad guests, quite often parlor games were played with much gusto. These games included many that we are still familiar with, such as blind man’s bluff, twenty questions, hide and seek, snapdragon, and charades.

Charades was invented in 16th century France and became very popular in Britain by the time of the Regency. Unlike our contemporary version, during the Regency the game wasn’t carried out in silence with contestants acting out the words of the answer. Instead, a riddle was spoken that gave clues to the syllables of a word then a description of the whole. And the whole thing had to rhyme.

The first one to guess the charade won.

Charades was a popular game with Jane Austen, both to play with her family and guests and as an entertainment for her characters in several of her novels.

Some people created their own charades, but many were published in books and magazines so people could use them ready-made. Sometimes they were printed on ladies' fans, with the answer on the reverse side. Usually the charades are in three parts, the first denotes the first syllable, the second, the second syllable, and the third describes the whole word.

Below are a couple of charades printed in the book Riddles, Charades, and Conundrums, complied by John Winter Jones in 1822.

My first, whatever be its hue,

Will please, if full of spirit;

My second critics love to do,

My first a blessing sent to earth,

Of plants and flowers to aid the birth;

My second surely was design’d

To hurl destruction on mankind:

My whole a pledge from pardoning heaven,

Of wrath appeas’d and crimes forgiven.

In the Victorian period the game changed to include acting out the words without words (in Jane Eyre the company plays charades and acts out the word Bridewell in silence). And has continued on that way to the present day.