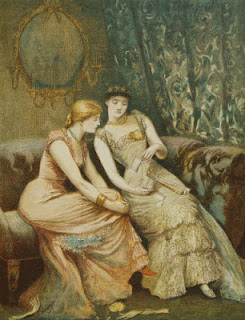 The dance card, the programme du bal or Carnet de bal, is a little booklet, usually with a decorative cover, which lists dance titles, composers, and provides a place for a lady to write in the name of the gentleman she intends to have as a partner for each specific dance.

Opinions vary as to when dance cards came into popular in England. While I can’t find evidence that they were used in England during the Regency era, they appear to have been made in Birmingham, England as early as 1803. According to my research, Austrians used dance cards before they caught on in the rest of Europe. Later, dance cards probably spread as people returned home from the Congress of Vienna which was basically a big party disguised as a series of series of negotiations that officially ended the Napoleonic Wars (David King’s Vienna 1814 is a great source for The Congress). Dance cards gained popularity at balls and assemblies sometime during the 1830s, during Queen Victoria's reign. 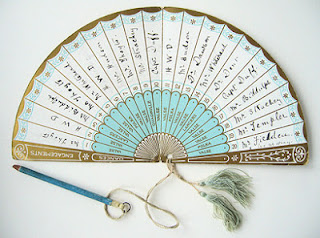 Each dance card was is different. Many of the ones I've seen in private collections had elaborate covers made from precious metals and jewels like silver, ivory or mother of pearl, bone ivory, tortoise shell. This may be because the plainer ones weren't saved, but it's also possible, given the Victorian's penchant for anything ostentatious, that they were all ornate. The ones that have survived today also vary in both size and style.

A few are inscribed with the words "Bal" which is French for ball. The ones with images I could use look like fans, others I saw are booklets with ornate covers. 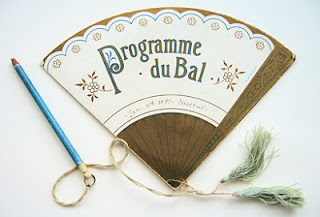 In the previous era, formal balls began with minuets, danced one couple at a time, in a rigidly prescribed order defined by the social rank of the dancers. The highest ranking couple led off the first dance. The man would withdraw, and the lady would dance with the next highest ranking gentleman. She would withdraw and then he danced the next minuet with the next highest ranking lady, and so on until everyone had a turn. Traditionally, they gave over the second half of the evening to country dances, done in a lengthwise formation. Even so, rank again became important in deciding who lead off the set. That person also chose which dance they all would do.


Anyway, at the time of the Vienna Conference, country dancing and formal minuets began losing popularity. Precedence and etiquette which dictated to whom one could dance had begun to fade, and the long country dances were replaced by shorter pair dances like the waltz, valse, polka, lancers and quadrille. Because of the new, less formal dancing and shorter dances, people could do more of them each evening. It probably became harder for young ladies to remember which young gentleman she'd promised a dance. Some sources mention ladies writing names on the underside of their fans to help them remember promised dances but I don't know how often or when that occurred. At one point, ladies reportedly used decorative notebooks to keep track of the name of each gentleman who'd asked for her to "stand up" with him. Many ladies already carried in their reticules small notebooks that opened like fans to jot down shopping lists and so forth. Naturally, they used them to record their evening's dance partners. Many preserved them as a souvenir of the evening.

Later in the century, dance cards became pre-printed booklets of paper which listed each dance the musicians would play, in order. They became progressively more decorative and elaborate as the century progressed. Ribbon or cord attached tiny pencils to the card or program by which ladies let the cards dangle from their wrist. Some were metal, others were made of shells or carved bone.

Fellow Regency author, Marissa Doyle, has a wonderful collection of dance cards in her private collection. You can view her post on Dance Cards, and admire her pictures, here on her blog, Nineteen Ten.

As far as I can tell, dance cards began to lose popularity sometime in the 1920s. Of course, now, no one reserves dances and few even know how to dance. Sigh. Too bad.

So anyway, if you've ever wondered why I never use dance cards in my Regency historical romance novels, now you know. They didn't appear to have existed in Regency England.

The Fastest Travel in England, Two Hundred Years Ago 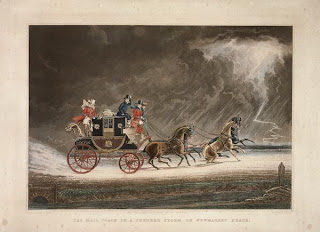 If you wanted to get somewhere fast in Regency England, you took the mail coach.

Charged with the timely delivery of the mail, the mail coaches provided their few passengers with a faster, less crowded and cleaner ride than private stagecoaches, although more expensive.

Britain's first mail delivery system, created in 1635, used mounted riders traveling between different "posts", where the postmaster collected his local mail and sent his own on. The system was slow, inefficient and highwaymen found the solitary riders easy targets.

By the late 1700's, Britain needed a better method. In 1784, John Palmer, a Bath theater owner, suggested employing coaches like the ones used to transport acting troupes. At first, the government ridiculed his idea. But with the blessing of the Prime Minister, William Pitt, Palmer funded an experimental run between Bristol and London. The trip took sixteen hours. The previous time was up to thirty-eight hours. Convinced, the government authorized more routes and rewarded Palmer with the office of Surveyor and Comptroller General of the Post Office.

The original coaches carried four inside passengers, a driver, and the Post Office guard, who rode outside in the back with the mail box. Later, the coach added three more outside passengers, one beside the driver and two behind him. Private contractors supplied the original coaches, but by the early 1800's the Post Office had acquired its own fleet of vehicles painted with a distinctive black and scarlet livery. Travel times were about 7-8 miles in summer, and 5-6 miles in winter, although, as roads improved, rates improved to about ten miles per hour.

The primary requirement of the mail coach was speed. They almost always traveled at night when the roads were less crowded. They also had the right of way. When the guard blew his post horn to signal the mail coach's approach, other vehicles on the road had to move aside, turnpike toll takers had to let them pass through without stopping or pay a fine, and the mail had to be ready at the post stops. Sometimes the coach didn't stop at all and the guard would toss the mail off and grab the deliveries from the waiting postmaster.

Speed did not equate to comfort. Roads were rough and the coaches ran in all weathers, making travel unpleasant, especially for those riding outside. Passengers often had to disembark to lighten the load when the vehicle went up a steep hill. On the plus side, mail coach travel was safer than on private stagecoaches. The guard defended the mail with a blunderbuss and two pistols. As a result, mail coaches suffered fewer highwaymen attacks than private stagecoaches, although some did occur. 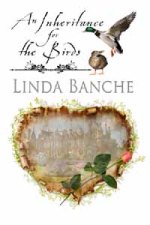 With its scarlet and black livery and the sound of the post horn ringing over the countryside, the mail coach reigned supreme until the advent of the railroads in the 1830's. The government shut down the last London mail coach route in 1846, although services continued in the countryside for a few more years.

In An Inheritance for the Birds, (Buy Link here) my Regency comedy novella, the hero travels from London to Somersetshire by mail coach. He sits outside all night and the coach passes through a summer downpour. By the time he reaches his destination and encounters the heroine, he is not a happy camper. And then he meets the birds…