The Regency Swoon by Jenna Jaxon

One trope or event found very often in period romances is “the swoon.” It is true ladies did faint with some frequency in the Georgian, Regency, and Victorian periods. In some cases tightly laced clothing is the culprit for these fainting fits, but there were other reasons for it as well. The tightly laced corsets and heavy fabrics of the Georgian and Victorian periods almost assured that ladies would faint from the 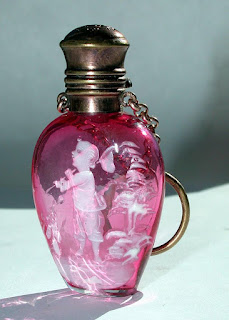 sheer lack of oxygen at some point in her day. Regency ladies, however, enjoyed lighter fabrics and a very short demi-corset or stays that gave them closer to a natural experience as far as clothing was concerned. Still, Regency ladies still fainted regularly for a variety of reasons. The actual medical condition associated with fainting is called Vasovagel syncope. It’s the nervous system’s reaction to great stress or some kind of emotional trigger. What happens is the heart rate slows, there’s a sudden drop in blood pressure, depriving the brain of oxygen and therefore triggering “the swoon.” 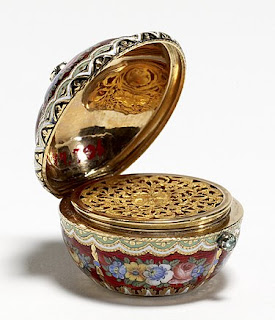 An attack of nerves or “the vapours” might be enough to make a lady swoon. Some ladies, wishing to be thought very delicate or sensitive (a popular quality during the Regency) would faint or pretend to faint to give the appearance of delicacy. This show of weakness was a prized quality by gentlemen, brought up to believe that women were the weaker sex and therefore could not bear such vulgarities as foul language, explicit talk (especially about sex or anything having to do with bodily functions), or even bad manners. In fact, so many ladies felt the need to swoon that a popular piece of furniture during the period was the fainting couch. Every lady was forearmed against the possibility of an attack of the vapours with a small vial of smelling salts called a vinaigrette. 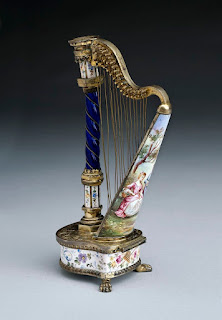 These were small glass bottles or boxes, often with silver filigree coverings, that held sal volatile, one of several concoctions designed to jolt the fainter back to consciousness. Smelling salts could contain a mixture of ammonium carbonate and alcohol, or spirit of hartshorn (water and ammonia). By the Regency, a strong distilled vinegar with added essential oils like lavender, was the preferred potion used. The vinaigrette was held beneath the victim’s nose and the inhalation of the spirits would snap them back to consciousness. In my recent release, Almost a Countess, my heroine, Dora Harper, uses her vinaigrette several times to revivie the hero, Lord Aberfoyle when he is injured. But the table turns when he also wields the smelling salts to revive her from their first kiss! You can find Almost a Countess on Amazon. Sources: Hewitt, D. G. “The 10 Do’s and Don’ts of Etiquette to Become a Lady in Regency England.” History Collection, May 13, 2018. Karsten, Susan. “Fainting in the Regency.” Vanessa Riley’s Regency Reflections, October 3, 2013. Penrose, Andrea. “Why Do Regency Heroines Swoon?” Word Wenches, February 4, 2021.
Posted by Jenna at 9:53 AM 2 comments: