The Tradition of the Stirrup Cup by Jenna Jaxon 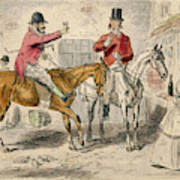 I don’t know when I first heard of stirrup cups, but while writing my WIP recently, I added the tradition into a scene where riders were about to ride off in search of someone. I had them handed a stirrup cup and, because I had to research it thoroughly, ended up finding out quite a lot about this ancient custom. Although the tradition of the stirrup cup became most popular in the 18th and 19th centuries and is most often associated with fox 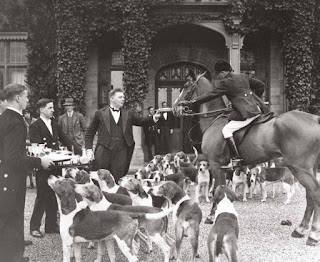 hunting, the handing of a drink to a person about to make a journey dates back well into medieval times. Apparently the action is found in Chaucer’s Canterbury Tales, so it was certainly an established practice by the mid-14th century. 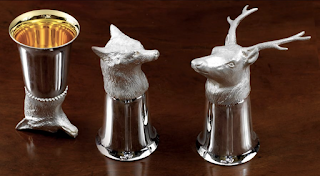 A stirrup cup is a small cup, originally without a base, handed to a traveler or hunter when they were just about to leave for a journey or a hunt, when their boots were literally in the stirrups. They would drink the small libation, usually port or sherry (and in the Victorian period could be something called Cherry Heering, a combination of cherry liqueur and brandy from Denmark), before leaving for home or sport. The Scots were well known for bestowing a parting drink called the dochan dorious, the “drink of the door.” 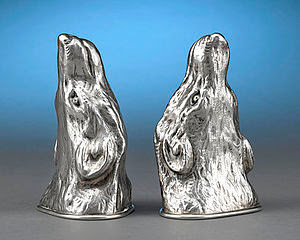 The cups themselves were small, holding only about two ounces of spirits making it easy to drink quickly. They were traditionally made of silver or pewter, although you can also find them made of 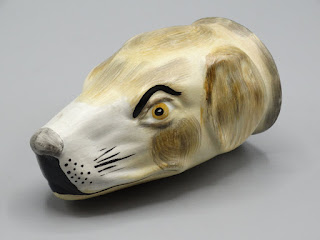 ceramics. Traditionally, the cups are made in the shape of foxes or hounds, but you can also find deer and horses heads. Some are crafted so that the animal becomes the legs of the cup allowing it to be placed on a tray. Others are meant to be handed to the rider, who drinks, then hands it back to the servant. Of course, today we would not think of giving a friend, “one for the road,” so with the exception of fox hunting, the stirrup cup may be relegated to historical romance novels. Still, it would be a stirring scene, with the hunters milling around, being handed up a shiny silver up, downing the drink and feeling the glow as it burns down into your stomach, a bracing beginning before heading out for a cold day of hunting. Tally-ho! Sources: “A Drink on Your Way Out: The History of Stirrup Cups.” Manhattan Art& Antiques Center Blog, 2020. French, Derek. “The Stirrup Cup Tradition.” Covertside, n.d. “The History of the Stirrup Cup.” Horse Canada, January 22, 2013. Thompson, Shea Davidson. “The History of Stirrup Cups and Where You Can Purchase Your Own.” The Bourbon Magazine, August 5, 2020.
Posted by Jenna at 1:05 AM 4 comments: