The Martha Stewart of the Victorians

The modern homemakers and home managers among us all recognize the name Martha Stewart. You've probably read a recipe by The Pioneer Woman or the Six Sisters. And if you haven't been on Pinterest at least once, I'd be pretty shocked.

Mrs. Isabella Mary Beeton was the woman who fulfilled pretty much all the above roles for the Victorian woman. Her book, Mrs. Beeton's Book of Household Management, was in just about every home. People in England still know who she is, as her book became something of an icon. And what a book it was! Original copies still appear, occasionally, on auction and they bring in thousands of dollars/British pounds.

Mrs. Beeton got her start as an authority on household matters at just 21 years old. She wrote articles about domestic duties, recipes, and other household matters. The articles were published in The English Woman's Domestic Magazine. When her tips and tricks were combined in a single volume, there were 2,751 entries to guide her contemporaries through everything from what to feed infants to the proper heat of a stable or coach house. This woman covered everything. And she did it fast. Mrs. Beeton died at the age of 28, from an infection arising after childbirth.

What kind of advice did she give the people of her time? Recipes, how to legally will your belongings to others, health remedies, and instructions on how to properly open a ball. While a lot of her work is irrelevant to people in modern times, it's still fascinating to read, especially when we picture our favorite literary heroines consulting this huge book in order to prepare a menu to impress their beloved, or find a cure for an illness in their home.

Here are a few excerpts for your amusement:


CURE FOR THE TOOTHACHE.--Take a piece of sheet zinc, about the
size of a sixpence, and a piece of silver, say a shilling; place them
together, and hold the defective tooth between them or contiguous to
them; in a few minutes the pain will be gone, as if by magic. The zinc
and silver, acting as a galvanic battery, will produce on the nerves of
the tooth sufficient electricity to establish a current, and
consequently to relieve the pain. Or smoke a pipe of tobacco and
caraway-seeds.


A recipe for something called "Snowballs."

APPLE SNOWBALLS. INGREDIENTS.--2 teacupfuls of rice, apples, moist sugar, cloves. Mode.--Boil the rice in milk until three-parts done; then strain it
off, and pare and core the apples without dividing them. Put a small
quantity of sugar and a clove into each apple, put the rice round them,
and tie each ball separately in a cloth. Boil until the apples are
tender; then take them up, remove the cloths, and serve. Time.--1/2 hour to boil the rice separately; 1/2 to 1 hour with the
apple. Seasonable from August to March.

IN PAYING VISITS OF FRIENDSHIP, it will not be so necessary to be
guided by etiquette as in paying visits of ceremony; and if a lady be
pressed by her friend to remove her shawl and bonnet, it can be done if
it will not interfere with her subsequent arrangements. It is, however,
requisite to call at suitable times, and to avoid staying too long, if
your friend is engaged. The courtesies of society should ever be
maintained, even in the domestic circle, and amongst the nearest
friends. During these visits, the manners should be easy and cheerful,
and the subjects of conversation such as may be readily terminated.
Serious discussions or arguments are to be altogether avoided, and there
is much danger and impropriety in expressing opinions of those persons
and characters with whom, perhaps, there is but a slight acquaintance.
It is not advisable, at any time, to take favourite dogs into
another lady's drawing-room, for many persons have an absolute
dislike to such animals; and besides this, there is always a
chance of a breakage of some article occurring, through their
leaping and bounding here and there, sometimes very much to the
fear and annoyance of the hostess. Her children, also, unless
they are particularly well-trained and orderly, and she is on
exceedingly friendly terms with the hostess, should not
accompany a lady in making morning calls. Where a lady, however,
pays her visits in a carriage, the children can be taken in the
vehicle, and remain in it until the visit is over.


So, no dogs in a friend's house and leave your children in the carriage! Reading through some of these entries gave me cause to giggle, cringe, and be very grateful for modern medicine and menus. It's fascinating to see how those before us lived and where they looked for advice before we could Google or ask Alexa or Siri.

If you'd like to learn more about Mrs. Beeton, or read her book for yourself, there are some links below to help you out. :-)


Sally Britton's Sweet Historical Romances, based in the Regency era, can all be found on her author page on Amazon.com.
Posted by Sally Britton at 1:26 PM 1 comment:

Infidelity and Bastardy during the Regency by Jenna Jaxon

Although our modern sensibilities toward infidelity in marriage have been colored, here in America especially, by our Puritan roots, during the Regency period in England infidelity and bastardy were much more accepted than people today would like to believe.

Even though by the early 1800s love matches were becoming more popular with the aristocracy’s sons and daughters, there were many more couples from the late Georgian period who had been parties to arranged marriages. These matches, usually arranged by the couple’s parents, had been considered the ordinary course of matrimonial events from time immemorial. Marriages at that time were made to gain or retain property, increase wealth or position, or develop family dynasties. Couples may not have met more than two or three times (some not at all) before the wedding, and although it was hoped they might develop some affection for one another and come to “rub along” well together, that eventuality would have been considered a bonus to the marriage, not a necessity of it. 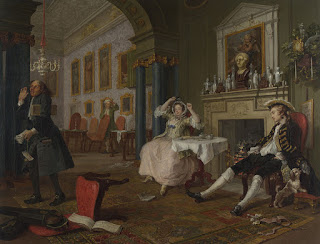 As a result, husbands and wives often found the love and affection missing from their marriages in the arms of other men and women. Husbands quite often took mistresses or participated in affairs that equally often produced illegitimate children who were barred from inheriting the father’s title or estates unless a specific bequest was made to them in his will. It was also up to the father’s sense of honor as to whether he would provide for mother and children.

Wives of the nobility, after producing the required “heir and a spare,” also strayed from their marriage vows and took lovers for whom they felt 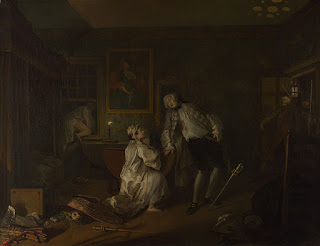 a passion. With contraception being unreliable or hard to obtain during the Regency, wives could and did become pregnant with their lovers’ children. These children were presumed to be legitimate issue and could inherit titles and estates automatically upon the death of the husband. “The presumption in favor of legitimacy meant that the status of a child born to a married woman could not be impeached without unequivocal proof that the husband was not the father. It had to be shown with irresistible evidence that the husband was impotent, that the husband was divorced from the wife (separation was insufficient), or that the husband was absent from England, or at least did not have access to his wife, when the child was conceived.”

Of course, the ton did not turn a completely blind eye to these illicit affairs, although it did not sit in as harsh judgement on these couples as would the Victorians in the coming decades. Once love matches became the leading method of arranging marriages, the need for physical intimacy outside of marriage was assumed to be greatly reduced, so that infidelity became a much greater social abhorrence than in the Regency.

In my recently released romance, What a Widow Wants, the act of infidelity and the consequences of it imbrue the hero and heroine with the possibility of scandal and ruin. What a Widow Wants is available at Amazon. 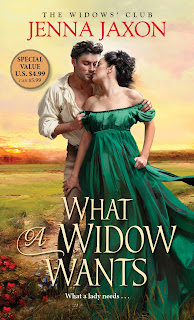 *Images (other than my cover) are from Hogarth's series Marriage a la Mode.