The eighteenth century was the golden age of the requisite Grand Tour wealthy young Englishmen took to finish their education. These weren't tours as we know them today. They often covered several years and employed a small army of private tutors to facilitate the acquisition of knowledge and proficiency in European languages. These young men would also take valets and fencing masters. 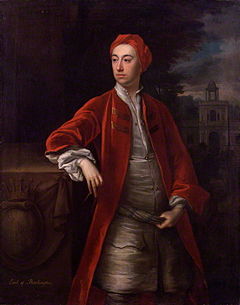 His contemporary, Richard Boyle, 3rd Earl of Burlington (1694-1753) toured the Lowlands and Italy in 1714 at age 20, returning with 878 caskets of art, clocks, and musical instruments. After the English publication of Andrea Pallidio's architectural works, Burlington (the Architect Earl) was keen to follow in Pallidio's footsteps as well as Inigo Jones' and returned to Italy in 1718 and 1719. 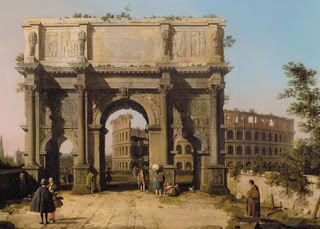 Still another of their contemporaries, Philip Dormer Stanhope (1694-1730), the bastard only child of the 3rd Earl of Chesterfield, spent just under six years on the Continent to acquire the attributes his father deemed necessary for him to take a position in Society and in the diplomatic corp. He left England at age 14, accompanied by another young aristocrat and his own master. In each country he visited, his father demanded his valet be a native speaker so Philip could become more proficient in each language. He spent time in Germany, Austria, Switzerland, and Italy. At age 18, he took up residence in Paris, no longer obligated to study with his various tutors. At this time his father wanted him to learn the manly pursuits in Society: low-stakes gambling, attending salons, and operas. Also at 18, he received his own carriage, footman, a valet de chamber, and a valet de place.

A few decades later, Whig Statesman Charles James Fox (1749-1806), a grandson of the Duke of Lennox, was taken from Eton by his father so he could gain some "polish" on the Continent. In Spa at age 14, urged on by his father, he lost his virginity at the same time he embarked on his disastrous association with high-stakes gambling.

The Grand Tour was not just the privilege of the aristocracy. William Beckford (1760-1844), the once-wealthiest commoner in England, embarked on his Grand Tour at age 18. No expense was spared. It was said that because his entourage consisting of three carriages, outriders and relays of spare horses was so large, he was mistakenly taken for the Austrian emperor. Beckford's Grand Tour journal was published, and a paperback edition edited by Elizabeth Mavor was published by Penguin in 1986. Those looking for an accounting of great excesses will be disappointed. As one whose greatest passions were directed at young boys and nature, Beckford's observations are not very enlightening to today's readers.

The French Revolution and the Napoleonic Wars affected Englishmen's Grand Tours, and the advent of rail travel a few decades later made the progression through the Continent available to the middle classes.—By Cheryl Bolen


Cheryl Bolen's latest novel, Falling for Frederick, a contemporary romantic suspense set in England, is a Kindle Serial in nine installments. "Aided by lord of the manor, lovely graduate student archivist seeks priceless medieval artifact—just steps ahead of those who've already killed to get it." More articles on Georgian England can be found at www.CherylsRegencyRamblings.wordpress.com.
Posted by Cheryl Bolen at 11:32 PM 3 comments:

When Was a Duke a Duke?

We tend to think of dukes and viscounts as having always been around in the British nobility. In fact, these titles were created at specific dates, often as the result of the ruling monarch looking to reward a favorite person. English nobility grew as a result of the crown granting a “Patent” that stipulated the degree of the title and how it could devolve (go on to future generations). This leads to one of the fun things in fiction—creating your characters background.

It’s great fun to make up things—and inventing the background for a character’s title means going back in time. Perhaps you here has a recent creation—he’s only the first earl. Or perhaps, as in A Much Compromised Lady, the earldom dates back to Saxon times—meaning it’s a more important title than any newer dukedom. What all of this means is that you have to have some idea of when titles first came into use.

In England, King and queen are ancient titles. The Old Saxon was cyng or cing, and cwen.  For Saxons, the title designated an elected leader.  Then William came along in 1066 and made it something that’s inherited and brought along all his Normal feudal laws.
Prior to the Normans, the highest Saxons title was earl—in fact, William was called Wyllelm, earl of Normandize in a chronicle of 1066. But the Normans changed everything. Knights as a title start to show up after the conquest, in the 1000’s—it was a general term for any military leader. The Normans brought the titles of prince/princess with them in the 1200’s (but, until the early 1600’s, only the king’s eldest son could call himself a prince).

The Normans also tried to change the title of earl to count—which is why an earl’s wife is called a countess. However, count never stuck well with the Saxons, and so we’re left with an earl and his countess.

Duke and duchess remained a foreign title until 1338 when Edward III raised his son from Earl of Cornwall to Duke of Cornwall (there are 26 dukedoms, other than the royal dukedoms that go the sons of the ruling monarch).

In 1385, Richard II made Robert de Vere the Marquess of Dublin, bringing this title into existence. The title came from the French, which shows the strong Normal roots still hanging around.
And from the late 1300’s we also get the title of baron.

In 1440, Henry VI made John, Baron Beaumont, into Viscount Beaumont. Henry made the title of viscount official, but the word had been around for almost a hundred years as a term for an earl’s assistant (specifically as a term to denote a high sheriff).

Rounding out the list, in 1611, James I needed cash to hang onto Ulster, which the Irish wanted back. James created the hereditary title of baronet, and the Red Hand of Ulster became their badge. However, baronets are not really members of the nobility—they hold no seats in the House of Lords and the title usually comes without lands.

So when you’re creating a character’s past titles, all this goes into the mix.

Perhaps your character has Norma roots in the family, and so there might be an old barony created in the 1300’s, given to a young knight ancestor. The family may not do anything for a few generations, but may end up with one of Henry VI’s viscount titles for services rendered the crown. And then, perhaps for services to Charles II’s restoration the famiy might come into a higher title, such as marquess. (Notice how titles are like a promotion—you always get the next one up.)
Very rarely, such as was the case with the Duke of Wellington, multiple honors may be awarded by the crown. Wellington was heaped with titles for his victories against Napoleon’s forces—and both lands and money came with these titles.

But what the crown gives, the crown can also take. Treason was one reason to remove a title from a man (and from his family)—and titles with no clear heir went into abeyance until an heir could be found or until the crown decided they wanted to give the title elsewhere.


Her writing has won numerous awards, including a nomination for Best Regency, the Grand Prize in the "Minute Maid Sensational Romance Writer" contest, judged by Nora Roberts, RWA's Golden Heart, and others. Her writing has repeatedly earned 4½ Star Top Pick reviews from Romantic Times magazine, as well as praise from Booklist and other reviewers, who note: "simply superb"..."wonderfully uplifting"....and "beautifully written."

Her work has been on the top seller list of Amazon.com and includes Paths of Desire, a Historical Regency romance, of which Romantic Historical Lovers notes: “a story where in an actress meets an adventurer wouldn’t normally be at the top of my TBR pile; but I’ve read and enjoyed other books by this author and so I thought I’d give this one a go. I’m glad I did. I was hooked and pulled right into the world of the story from the very beginning…Highly recommended.”
She has also published young adult horror stories, is the author of several computer games, and now lives in New Mexico with two horses, two donkeys, two dogs, and the one love of her life. Shannon can be found online at sd-writer.com, facebook.com/sdwriter, and twitter/sdwriter.