Barbaric Practices in the Name of Medicine

"I was obliged to send for the Apothecary, who bled me very plentifully, but, tho' it made me faint, it has reliev'd me wonderfully. Tonight I feel languid and stupid." Those two sentences were written around 1800 by Lady Harriett Bessborough to her lover, Granville Leveson Gower. (A couple of days later, she came down with the chicken pox.) 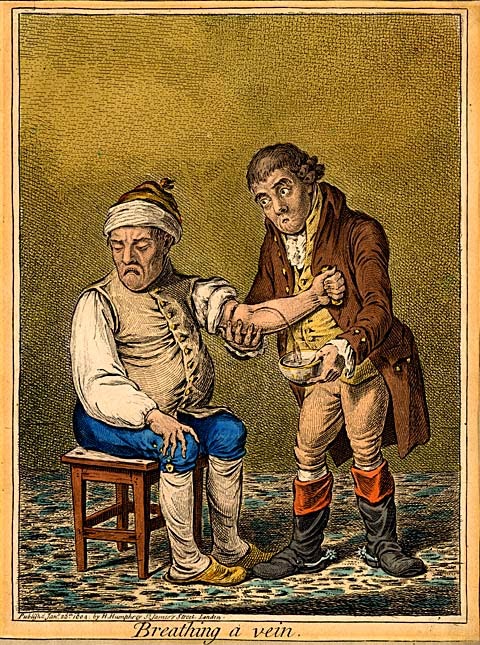 As those of you familiar with the 18th and 19th century know, the aforementioned blood-letting was a common occurrence up until the 20th century. It was only one of the idiotic practices that were inflicted upon well-educated people by medical practitioners whose knowledge of  the human body--by today's standards--was nonexistent.


In my reading of journals and letters from the era, I'm quite often shaking my head in disbelief over the barbaric treatments subjected upon patients by apothecaries, physicians, surgeons, oculists, and dentists. Here are some of these bizarre treatments I've underlined in my readings.


Take Georgiana, Duchess of Devonshire, sister of Lady Bessborough. When her eye swelled up, the surgeons were summoned. Among these oculists was Senior Surgeon-Extraordinary to King George III.  One of these so-called learned men almost strangled her to death in an effort to flush the blood up to her head. They also "broke" her eye, rendering her deformed for the rest of her life.


Bear in mind, there was no anesthesia at the time; so, most of these procedures were done on patients who were awake.
One wonders how people survived at all. Of course, we know life expectancy was quite low, and many early deaths must be laid at the door of these quacks. These medical practitioners had no medical training. They studied astronomy, thinking that the human body's "humours" were affected by astronomy.


Another case of misguided doctoring occurred with the young son and heir of Lord Elgin (of Elgin Marbles fame). The sickly lad suffered from asthma, so it was recommended to have him drink mercury. His doting mother, thinking she was spurring her son to good health, kept dousing him with the toxic mercury.


Needless to say, the lad never inherited his father's title for he died young after suffering a lifetime of very poor health. (His father's title passed to a son from Lord Elgin's second wife, after he divorced the lad's Scottish heiress mother.) 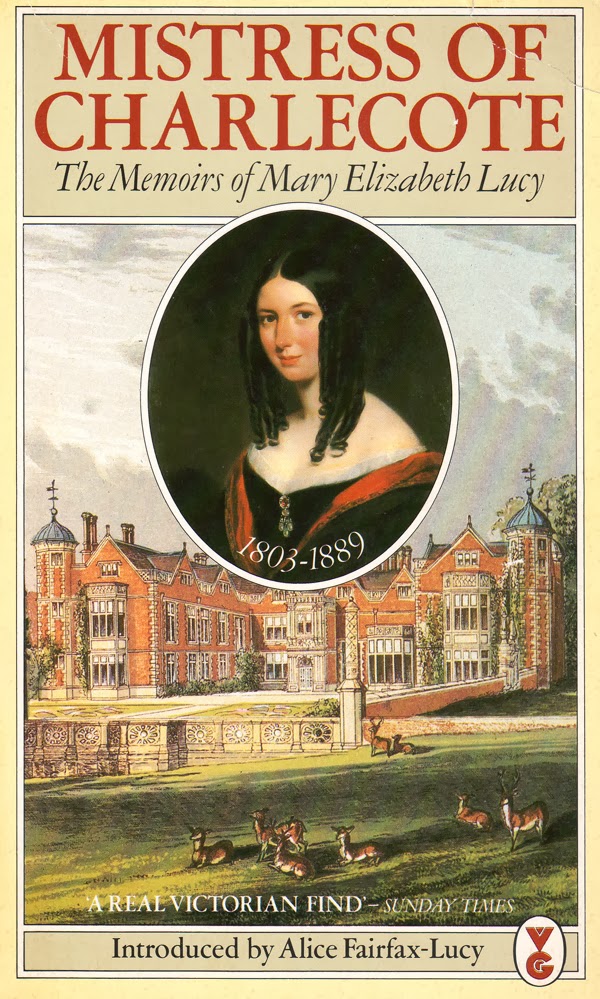 In her memoirs Mary Elizabeth Lucy, the mistress of Charlecote Park, tells of a tumble she took as a girl around 1810. It loosened her teeth. Her concerned mother took her from their home in Wales to consult a dentist in Liverpool who was known to be very clever. He immediately recommend removing every tooth in her mouth, setting them in gold, and putting them back. He said if he didn't do that, all the teeth would drop out.


A panicky Mary Elizabeth entreated her mother not to allow the dentist to remove all her teeth. And at age 80, all her teeth were still intact.
Mary Elizabeth also tells of the three doctors who attended her daughter, who'd suffered an attack of tetanus. "They cut off all her beautiful hair, blistered her poor head and nearly her whole body and applied such hot bottles to her feet and legs that they made them perfectly raw." Remarkably, she survived that treatment, but her lifespan was less than half of her mother's.
Reading these accounts deglamorizes the life of the rich and famous of Georgian England and makes me ever so glad I was born when I was. -- Cheryl Bolen, whose newest Brides of Bath book, Love in the Library, released this week
Posted by Cheryl Bolen at 2:00 AM 4 comments: 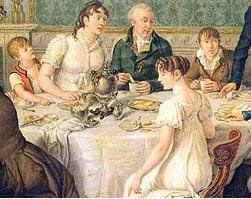 Part of the fun for any book is in the details—the clothes, the settings, and the food. Yes, the food. In the Regency, the upper class had fabulous meals. French chefs were imported by those who could afford the cost, and for some it became a competition to see who could serve the finest delicacies. Dishes such as “curry of rabbits”, “fricando of veal”, or even sugar icing moulded into “The ruin of the Turkish mosque” were dishes designed to impress. However, there was also good English fare to be found, such as leg of mutton, pheasant, salmon, trout, ham, chickens, macaroni, and all types of puddings. But to be truly fashionable, the fare should be French—meaning sauces.
The old joke has always been that France is the land of one religion and a thousand sauces, while England is the land of a thousand religions and one sauce. There is a good bit of truth in that, for many a country squire likes his beef and ale, and quite a few ate little else (for breakfast, and dinner—lunch is a more modern invention). Today, English pub-grub can also bring this saying to mind, for very often the only sauce is either salad dressing or malt vinegar for your “chips”. However, there are good English restaurants (Rules has been serving in London since the late 1700’s and offers up perhaps one of the finest Dover soles I’ve ever had, with as delicate a sauce as you can find on either side of the English Channel). And Regency recipes can set your mouth watering.
Below are a few of the more “doable” recipes. Quantities back then were not standardized and often ask for “a good handful” or for items that are much harder to come by today. However, these are recipes you can make on your own.
FRENCH SALAD
Maria Rundell’s book, Domestic Cookery by A Lady, became a best seller, with both recipes and household advice. Here is one of her recipes for a French Salad.
"Chop three anchovies, a shalot, and some parsley, small; put into a bowl with two table-spoons-full of vinegar, one of oil, a little mustard, and salt. When mixed well, add by degrees some cold roast or boiled meat in very thin slices; put in a few at a time; not exceeding two or three inches long. Shake them in the seasoning, and then put more; cover the bowl close, and let the salad be prepared three hours before it is to be eaten. Garnish with parsley and a few slices of the fat."
GOOSEBERRY PUDDING
This recipe also comes from Mrs. Rundell. But the “pudding” is not anything like what we would call a pudding but is a baked dish (and quite tasty). If you actually wish to try this, you may want to start with gooseberry jelly. For the 'few crumbs of roll’ called for, think of this as something like a bath bun--a sweet roll. For biscuit, think cookie, something sweet to crumble into the dish.
"Stew gooseberries in a jar over a hot hearth, or in a sauce pan of water till the will pulp. Take a pint of the juice pressed through a coarse sieve, and beat it with three yolks and whites of eggs beaten and strained, one ounce and half of butter; sweeten it well, and put a crust around the dish. A few crumbs of roll should be mixed with the above to give a little consistence, or four ounces of Naples biscuits.”
YORKSHIRE CAKES
In setting The Cardros Ruby in Yorkshire, I opted for a place of rugged beauty, which also allowed the guest to be housebound by frost. The cook for the household is French, and so serves up a few exotic dishes, including a sorrel soup and beef ala royale. My father's mother came from Sheffield in South Yorkshire, and I felt quite at home on the rugged moors with its purple heather blooming or roaming the green Dales. This other recipe, therefore, that might well have been used in The Cardros Ruby. This recipe comes from Hanna Glass’s cookbook, published in 1765.
“Take two pounds of flour, and mix with it four ounces of butter melted in a pint of good milk, three spoonsfull of yeast, and two eggs: beat all well together, and let it rise; then kneed it, and make into cakes; let them rise on tins before you bake, which do in a slow oven.”
To translate this to the modern era (and add in my grandmother's Yorkshire secrets), melt 4 oz of butter. Add the melted butter, a pint of milk, and a packet of self-rising yeast to two pounds of four. Add two eggs and mix well. Cover and let rise in a warm place. When dough has doubled in size, beat down by hand, and kneed (this is a perfect task to have your kids do—we did this for grandmother). Tear off fist sized pieces of dough, shape into round forms and lay on a baking sheet. Cover and let rise again (for 1/2 to 1 hour). Bake at 350 degrees until brown.
Posted by Unknown at 8:03 PM 2 comments: