The Journals of Dorothy Wordsworth

The spinster sister of the immortal poet William Wordsworth was present at the creation of his and Samuel Taylor Coleridge's 1799 Lyrical Ballads, which gave birth to the Romantic movement in English literature. She was also present throughout her famous brother's adult life. The two, among the five Wordsworth siblings orphaned and separated at an early age, would rejoin when Dorothy Wordsworth was 24 and William 25, and they would live under the same roof until William's death 55 years later.
Theirs was an extraordinarily loving relationship, and Dorothy's prose is credited with influencing her brother's poetry by the keen observations on nature she recorded in the journals William encouraged her to keep. An example from Dorothy's journal:
One leaf on the top of a tree—the sole remaining leaf—danced round and round like a rag blowing in the wind.

From her brother's poem Cristabel:


The one red leaf, the last of its clan,
That dances as often as dance it can,
Hanging so light and hanging so high,
On the topmost twig that looks up at the sky. 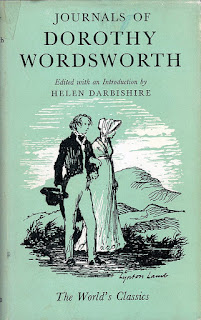 The first of her journals, The Alfoxden Journal 1798, takes up less than ten percent of The Journals of Dorothy Wordsworth, edited by Helen Darbishire for Oxford University Press in 1958. Of more importance are The Grasmere Journals 1800-1803 because they record Dorothy Wordsworth's observations of the Lake District which her brother and Coleridge made famous.  Dorothy and William moved to Dove Cottage in Grasmere the last month of the eighteenth century. Two years later William married Mary Huthcinsons who, along with her orphaned siblings, had been close to the Wordsworth orphans for many years. There is no jealousy on Dorothy's part toward the woman with whom she would share the brother she had lived alone with for the previous seven years.


Perhaps that is because as Mary busied herself with mothering the five children she bore William, Dorothy remained William's companion on their legendary walks throughout the Lake District.
These journals, which are copyrighted by the Dove Cottage Trust, give those of us reading them two centuries later a feel for the minutia of their everyday life: the ringing of distant sheep bells, haystacks in the fields, baking day. Surprisingly, to Dorothy, plodding through the frost of a cold January day was pleasant, but summer heat could send her to bed for days.

For the author of  English-set historicals, these journals are an invaluable source for descriptions of the English countryside—its plants, birds, and other creatures—in every season of the year. This little volume is a keeper.--Cheryl Bolen's newest release is Ex-Spinster by Christmas, a House of Haverstock novella.
Posted by Cheryl Bolen at 10:00 PM No comments: 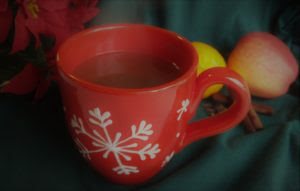 Ever wonder what "a-wassailing" means?
it means to sing for some wassail. I guess it's kinda like singing for your supper, only the carolers go from place to place hoping for a nip of the traditional hot beverage.

One of my winter and holiday favorites is Wassail, also know as spiced hot apple cider. It's one of those things it's hard to get wrong. All the recipes I've tried are yummy and satisfying. Some include citrus such as lemon and orange. Traditionally, it contains alcohol such as wine or rum or even ale, but I don't drink alcohol so I make it without.  No matter how you make it, wassail is a comfort for cold winter nights as well as a solution for a sweet craving. A few years ago, a friend shared with me her trick: apricot juice. It adds a richness and complexity other recipes don't have. 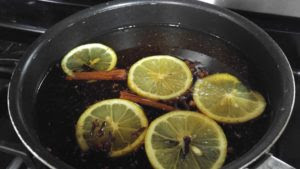 Here it is:
1 large jug of apple cider
1 can of apricot juice
3 cinnamon sticks
4 nutmeg cloves
a dash of nutmeg
a dash of allspice
Optional: orange or lemon slices

All of these can be adjusted according to taste so you may want to experiment.

Simmer for at least an hour but you can simmer all day. It does get stronger and stronger so after several hours, you may want to tone it down with a bit more apple cider. It makes the house smell heavenly! 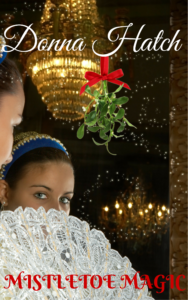 In my Christmas novella, Mistletoe Magic, the heroine adores the wassail her friend’s mother makes and will go to great lengths to get the recipe...as well as take advantage of the mistletoe at the annual Christmas ball.

Note: The Colonial Williamsburg blog has lots of fun history behind this traditional drink.
Posted by Donna Hatch at 12:30 AM 1 comment:

The Mummer’s Play
The Middle Ages were a time of religious conviction in all facets of daily life. This included the theatre of the period, that was, at least in the early days, unhappy with theatrical performances. Once the Church discovered the teaching ability of theatre, however, they began to use dramatic performances to educate a mostly illiterate populace.
By the Late Medieval period, however, entertainers had strayed from the strictly religious performances, and troupes of entertainers, mummers as they were often called, traveled throughout Europe giving performances in town squares and noble households. These plays were often taken not only from Bible stories, but from legends and tales of heroes. One particular set of plays they undertook were called “guises” because the actors were disguised in often outlandish costumes. One play in particular, “St. George and the Dragon,” was immensely popular. (That is why I included it in Seduction at the Christmas Court.)
The costumes, as I noted above, could be very strange and fantastical. Men dressed as women and in some case animals. St. George traditionally wore “silver armor, helmet, sword and shield with St. George and the Dragon” on it. His adversary, the Turkish Knight, dressed in “red trousers, blue loose jacket, turban, sword, and a shield with crescent.” And the Doctor, the Prince of Quacks, is styled in a “black swallow-tail coat and knee breeches, white waistcoat, perruque [wig], long nose.”
The texts of the plays were mostly rhymes and could include songs and dances.

TURKISH KNIGHT
Here comes I, the Turkish knight
Just come from Turkey-land to fight
I’ll fight thee, St. George-St. George, though man of courage bold,
If thy blood be too hot, I’ll quickly fetch it cold.

TURKISH KNIGHT
Wo ho! my little fellow, thou talkest very bold,
Just like the little Turks, as I have been told;
Therefore, thou Turkish knight,    {Threatening him}
Pull out thy sword, and fight;
Pull out thy purse and pay;
I’ll have satisfaction ere thou goest away.

The major actors/entertainers were the hero (St. George, Robin Hood, or in Scotland Galoshin) and a quack doctor who miraculously brings the slain villains back to life by means of a magic potion. The plays were performed exclusively by men, who played the female roles as well. These entertainers needed to additional skills in entertaining, such as acrobatics, juggling, singing, and mimicry.
Christmas time was a great time for merriment, and the mummer’s play was a fun way to pass the long winter’s evening in rhyme, song, dance, and merriment. 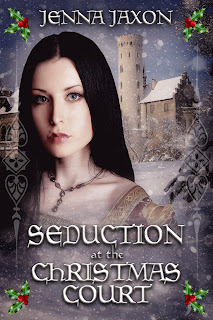 Christmas tidings of comfort, joy, and temptation
BLURB:
Alyse and Geoffrey, Lord and Lady Longford, have journeyed to the glittering Christmas Court of King Edward III in the year 1349 to wait upon the king and take part in some Yuletide merriment. However, when Geoffrey is suddenly called into the king’s service again, Alyse must remain at court, attending the queen and persuading her rebellious sister to accept an unwanted betrothal. When rumors of Geoffrey’s death arise, Alyse fends off an old suitor who wants to renew their friendship. But how long will he take “No” for an answer?

Here is an excerpt from Jenna's book:
“This entertainment will be tedious. I would much rather retire for a good night’s bedding right now,” he whispered, the puff of his breath tickling her ear and sending prickles of excitement down her neck.
She laced their fingers together. “’Twill be finished ‘ere long, my love. Then you can wield your weapon with a vigor yon knights cannot.”
He laughed and drank deeply. “Aye, sweet Alyse. My skill with both weapons outshines any other knight.”
“As you will not want me to be judge of that, I think, I will demur to your claim, although I will test your skills again with the one blade ‘ere the night is done.”
At Geoffrey’s bark of laughter—so loud it turned heads on the dais their way—Alyse settled back to watch the mummers, her cheeks burning, but a pleasant anticipation building within as well.
The mummer playing St. George took the center spot in the Great Hall and began a sing-song rhyme that soon had the court laughing at its nonsense. A stream of knights—played in turn by the other mummers—approached, made their rhyming challenge, and were quickly slain by St. George, whose wielding of his sword became swifter and swifter. He slayed the knights in such short order that by the time he faced the final knight, he did no more than look at the Turkish knight than the man fell down, his toes jingling softly as he landed on the soft rushes covering the floor.
A burst of laughter and applause followed that performance as the quack Doctor shuffled forward, his “magic potion” in a large bottle, gripped in his hand.
Thoroughly engrossed, Alyse laughed and clapped her hands. She held her breath and leaned forward as the Doctor poured the potion down the throats of the slain knights, spoke his own rhyme over them, and one by one, they began to twitch and dance, the rush-strewn floor seeming to come alive as they did. The room resounded with merriment as all seven knights revived.
Loud applause burst out from the courtiers, many of whom threw gold and silver coins onto the floor. Geoffrey tossed a gold florin to the Turkish knight. “For my lady’s pleasure,” he called.
The man nimbly caught the coin and made a deep bow. “Thank you, my lord.”
With a lecherous grin, Geoffrey grasped Alyse’s arm and urged her to rise. “And now allow me to attend to my lady’s pleasure as well.”

Today, Jenna is giving away a copy of one of her backlist Christmas books. Winner may choose which one to receive.
AUTHOR BIO:
Jenna Jaxon is a multi-published author of historical in all time periods because passion is timeless.  She has been reading and writing historical romance since she was a teenager.  A romantic herself, she has always loved a dark side to the genre, a twist, suspense, a surprise.  She tries to incorporate all of these elements into her own stories. She’s a theatre director when she’s not writing and lives in Virginia with her family, including two very vocal cats.
Jenna is a PAN member of Romance Writers of America as well as Vice-President of Chesapeake Romance Writers, her local chapter of RWA. She has three series currently available: The House of Pleasure, set in Georgian England, Handful of Hearts, set in Regency England, and Time Enough to Love, set in medieval England and France.
She currently writes to support her chocolate habit.
Find Jenna Jaxon online:
BLOG:  https://jennajaxon.wordpress.com/
TWITTER: https://twitter.com/Jenna_Jaxon
FACEBOOK:  https://www.facebook.com/pages/Jenna-Jaxon/146857578723570
AMAZON AUTHOR PAGE: https://www.amazon.com/Jenna-Jaxon/e/B005CHPBD2/ref=dp_byline_cont_ebooks_1