Gloves are one of the most versatile articles of clothing. Not only do they serve a specific purpose, they are wonderful fashion accessory.

Glove makers made gloves out of almost anything; sheepskin or deerskin, silk, linen, and often decorated them with precious metals, jewels, and fine embroidery. Gloves were worn to help protect the hands as well as keep them warm. Many people wore them when handling tools or working with leather. Warriors and knights wore gauntlets which is a very heavy duty glove. Falconers, as a matter of survival, wore gloves or gauntlets very early to protect their hands from the sharp claws of their beautiful hunting birds. Sometimes they decorated their gauntlets to match the hood they used to covered their bird's eyes.
The earliest gloves probably were created to keep people's hands warm. Though  there are earlier mentions of gloves, once instance was documented in 1st century AD by Pliny the Younger. He wrote of a scribe who wore them in the winter, probably to keep his hands warm enough to write in a cold and drafty castle. Though nothing in my research suggested women wore glove as early as men, I can't believe women didn't need them for warmth just as men did, maybe more so.

Gloves were found in Egyptian Pyramids in the tomb of King Tutankhamen, a.k.a. "King Tut" circa 1400 B.C. These were made of linen. Apparently, pharaohs wore gloves as a symbol of wealth and power, while women wore them as a beauty treatment--they rubbed oil on their hands and them put on silk gloves over them to protect them and let the oil soak into the skin.  I do a similar thing with socks on my feet 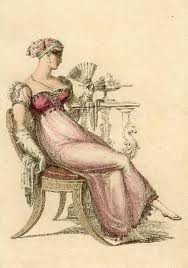 In England, women’s gloves became a fashion accessory during the thirteenth century, most often made of linen and silk. A guild of glove makers in 13th century Paris made them of skin or fur. They didn't become truly fashionable until the 16th century. Queen Elizabeth wore jeweled and embroidered gloves, and she reportedly slipped them off frequently to show off her beautiful hands.

During the Regency Era, men and women wore different gloves for different occasions. They wore them during the day at home, sometimes with holes in the fingers, so they could read, do needlepoint, and write. Usually those were knitted or crocheted. They always wore them when they left their homes to go for walks or call on friends. They had special riding gloves to protect their hands from the reins. And they wore them when attending balls, the opera and dinners with friends. It was considered bad form for a gentleman to touch a lady without his gloves on--far too intimate, you know. About the only time they didn't wear gloves was while eating.

I wear gloves for warmth and for driving, but the only other time I wear gloves is when I'm in Regency costume. It is nice to have on gloves when dancing, because if the man with whom I'm dancing has sweaty hands, I don't know it :-)