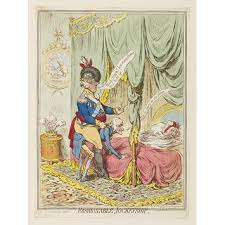 
British historican Vic Gatrell uses his study of the 60-year era of graphic satire to show that before the Victorian era, London was a city of sex and laughter. The result of his interest is the stunning City of Laughter: Sex and Satire in Eighteenth-Century London, a nearly 700-page tome featuring 289 of these "cartoons" published (in the U.S) in 2006.


Since many of the social situations which inspired these satirical illustrations are unknown to most of us, Gatrell has kindly provided text to explain the background. His research and knowledge of Georgian London are astonishing.


These 700 pages are crammed with interesting tidbits. Some examples:


·       Bachelor Prime Minister Pitt (the younger) "was stiff to everyone except a woman."


·       Drury Lane boxes cost 5 shillings, and upper gallery seats could be had for a shilling.


Because the artists slightly changed the actual names or omitted letters, the artists and printers did not get sued.


One print, for example, shows Lady Worsley washing her naked body in the bathhouse at Maidstone while her husband, Sir Richard Worsley,  stands outside, hoisting a man up to the small window near the roof to get a peek. The story goes that Sir Richard tapped on the bathhouse door to notify his wife he was going to give Bissett a peek. Apparently, Sir Richard was an accomplice in his wife's many adulteries. The text on the drawing reads:


Many of the illustrators accepted bribes. George Cruikshank (whose father, Isaac, was also a noted caricaturist) accepted £100 from the regent to strop satirizing him. Gillray earned a £200 annual pension from George Canning in 1797 to produce propaganda against the Foxite Whigs.


"Bums, Farts, and Other Transgressions" is the title of one of the chapters. If you ever wondered how to illustrate a fart, this is the book for you. Part of another chapter on libertines deals with the erotica Rowland illustrated from 1790 until 1810. Some of the erotica is truly graphic, even pornographic, except Gatrell explains that because they are humorous they do not meet the criteria for pornography. (Warning: Keep book out of reach of young children.)


Some of Rowlandson's erotica was costly to purchase and was prized by wealthier Londoners. These prints were also shared with women.


London in Regency times was the richest and most economically dynamic city in the world, and its residents were undoubtedly the most debauched.
Of the couple of hundred Regency research books in my library, this volume will now rise to the top five in breadth of knowledge imparted.—Cheryl Bolen’s second book in the House of Haverstock series, A Duchess by Mistake, releases on April 7 and can now be preordered.
Posted by Cheryl Bolen at 5:25 AM No comments:

Spotlight on Regency Fashion: the pelisse 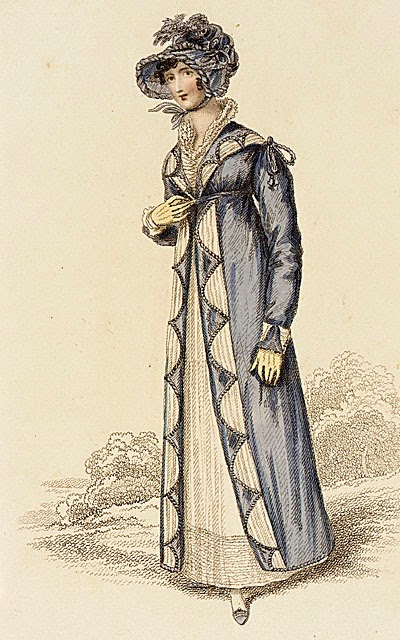 Ladies in Regency England had more reasons to change clothes than the modern-day woman would ever believe. They had special clothes for relaxing at home, walking, riding, going for a drive in a carriage, afternoon gowns, evening gowns, ball gowns, etc. And the number of accessories is even more mind-boggling.

But one of the Regency ladies' fashion accessories was practical as well as fashionable. It was the pelisse. Generally lightweight, Regency ladies wore this long over-garment to protect her clothes from dust and dirt. Since many roads were unpaved, walking and riding in a carriage produced dust and dirt that would sully a gown. And since fashionable ladies often wore white or light colors as a status symble, keeping clothing clean in a not-so-terribly clean environment must have proved challenging. Big cities such as London were even dirtier with all the soot polluting the air from burning coal.

Wearing a pelise became an indespensible part of fashion, as well as a necessary garment, outside one's home. Though pelisses didn't generally take the place of a warm coat or cloak, they also added a layer of warmth in the event the weather took a sudden turn.

I have additional pictures of pelisses and gowns on my Pinterest Regency and Jane Austen Page. 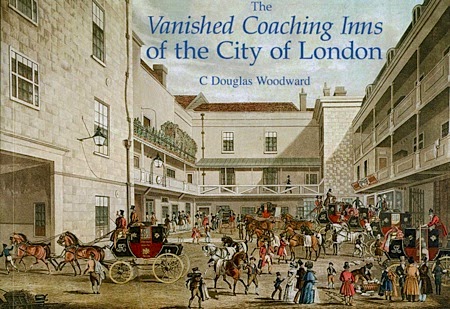 Over the centuries in England, post houses existed along the roads, many of them constructed at first to provide horses for the Royal Mail. The type of business determined its name: ale houses served ales, taverns served wine, inns provided rooms for travelers.


The post houses came to be known as posting inns, unlike the coaching inns that would provide carriage for hire. Eventually, public houses, which came to later be called “pubs” and were different from private houses or clubs, came into being might serve food and drink. All these establishments held to a long tradition of a memorable name, preferably one that might be made into a sign that would be easy for an illiterate person to identify. Common names included: the Blue Lion, the Pheasant, the Rose & Crown, the Feversham Arms, the Bell, Castle House, the Boar's Head, the Peacock, the Kings Head, the White Hart, the Swan, the George (a popular name after the Hanoverians took the throne). More unusual names might include the Running Footman, the Honest Layer, the Cock and Bull, or the Eagle and Child.

Initially, these posting inns or post houses provided only horses, but as the Royal Mail was changed in the late 1700’s to use mail coaches, the coaches, horses, and drivers were all supplied by contract. There was much competition for this lucrative business—a contractor earned not only a fixed regular income for the postal service, but could also charge fares for any passengers on the coach, and an inn could also hope for extra income from quick refreshments sold to passengers. 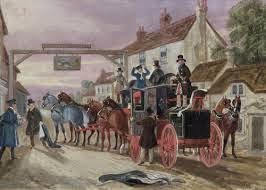 On Monday August 2, 1784, John Palmer's first coach left the Rummer Tavern in Bristol at 4:00 PM, carrying the mail and four passengers (which later became seven passengers, with four inside).  As noted, Palmer had long advocated postal reform and expansion—increased commerce, industry, and population demanded it.  After his friend William Pitt became Prime Minister, Palmer got authority to try his reform ideas. Palmer's Mail Coach reached Bath at 5:20 PM, and arrived in London at the Swan with Two Necks well before 8:00 the next morning to deliver mail to the Chief Post Office in Lombard Street.  The coach had traveled 119 miles in under sixteen hours, an incredible feat at the time.  Palmer received public acclaim and bureaucratic stone-walling, including a record of criticism which ran to three volumes of copperplate.  However, Palmer's Mail Coaches began to take hold.


In 1787, the Post Office adopted an improved mail coach design patented coach by John Besant and John Vidler. The two men soon held a monopoly on the supply of Royal Mail coaches, including their upkeep, and servicing, and all the coaches took on the distinct black and scarlet colors of the Royal Mail, with the stage number painted on the back side pannel.

From 1801 to 1808, England also had numerous private posts to carry letters between towns and manor houses.  Rates could vary from 1/2d to 1d or more for delivery.  From 1808 on, local delivery standardized at 1d per letter and post towns began to use the stamp P.P. for Penny Post.  The private posts, however, tended to be notoriously slow and unreliable.  Postmasters often went bankrupt, ending their service without much warning.  Those to whom speed carried more importance than money kept to the old practice of sending letters via servants, by the Common Carriers, or by private courier.

By 1811, approximately 220 mail coaches ran on regular schedules from London to various major cities.  These coaches used the main post roads and cross roads (post roads that did not pass through London, but which crossed the main roads), which could support the light, fast coaches.  The new process for macadamizing roads created excellent paved surfaces on the main roads, but other dangers existed, including: poor drivers (on the road and on the mail coaches), bad light from the lack of any moon at night, snow drifts, flooded rivers that had to be forded, collapsed bridges, thunder and lightning that might spook the horses, heavy fog, and rain that could be blinding. On steep hills, passengers might have to climb out and walk beside the coach going up and down to better save the horses for their primary job of delivering the mail. In addition, dust was always a problem on the road in the summer, and any lady who traveled generally wore a veil not to protect her identity, but to save her delicate skin. 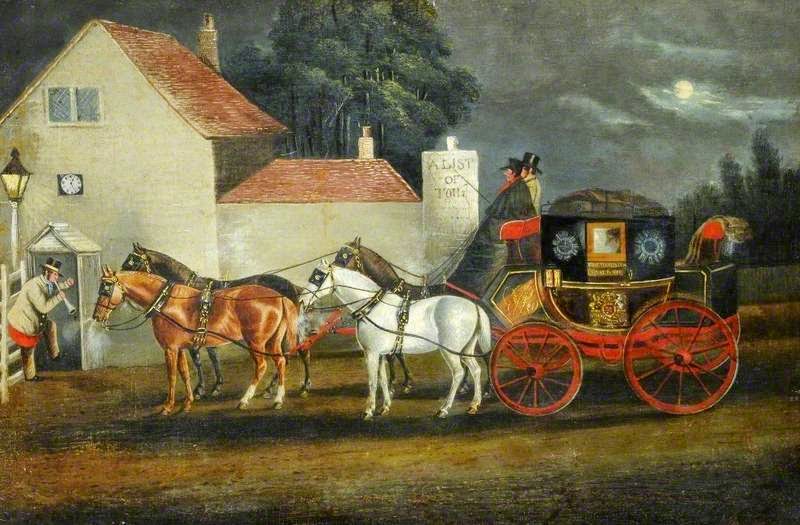 Toll roads were constructed during this time period—roads that were the enterprise of local contractors or postal concerns, and the toll was meant to pay for the construction work. Mail coaches had the advantages of not having to pay tolls, which could be worth as much as six pounds to the contractor.

The Royal Mail coach was faster than any stage as the mail only stopped for delivery of mail, and sometimes did not stop at all but only slowed to allow the mail to be exchanged with a quick toss. The coaches were drawn by a team of four, and had seating inside for four passengers, and outside for two or three more to sit with the driver. A seat inside for the Royal Mail from London to Bristol cost about 2 pounds and 10 shillings, while one outside cost about 1 pound.  In general, Royal Mail ticket costs were about one penny (1d) per mile more than would be charged by a privately operated stage. (Stage fares averaged about 2d  to 3d a mile for an outside seat, and 4d to 5d for an inside seat.)

Mail coaches averaged 7 to 8 mph on hard summer roads, and up to 10 mph on a good, straight road with no hills, but in poor winter conditions this speed went down to about 5 mph. Fresh horses were supplied every 10 to 15 miles. Unlike stage coaches, which were operated by private companies, the limit on passengers and luggage on the mail prevented the common danger of overturning due to excessive or top-heavy weight. The mail coaches also traveled mostly at night when roads were less busy and the coach might make better time.

But the heyday of the posting inns and mail coaches wasn't long. In the 1830's the first delivery of mail by rail took place between Liverpool and Manchester, and by the early 1840's London-based mail coaches were being withdrawn from service. The last mail coach service to London ended in 1846--the age of rail had taken over. Many posting inns closed as traffic moved from road to rail. A few regional mail coaches continued active service into the 1850's, but these, too, were being replaced, and many posting inns fell into ruin, with only those in the main towns surviving 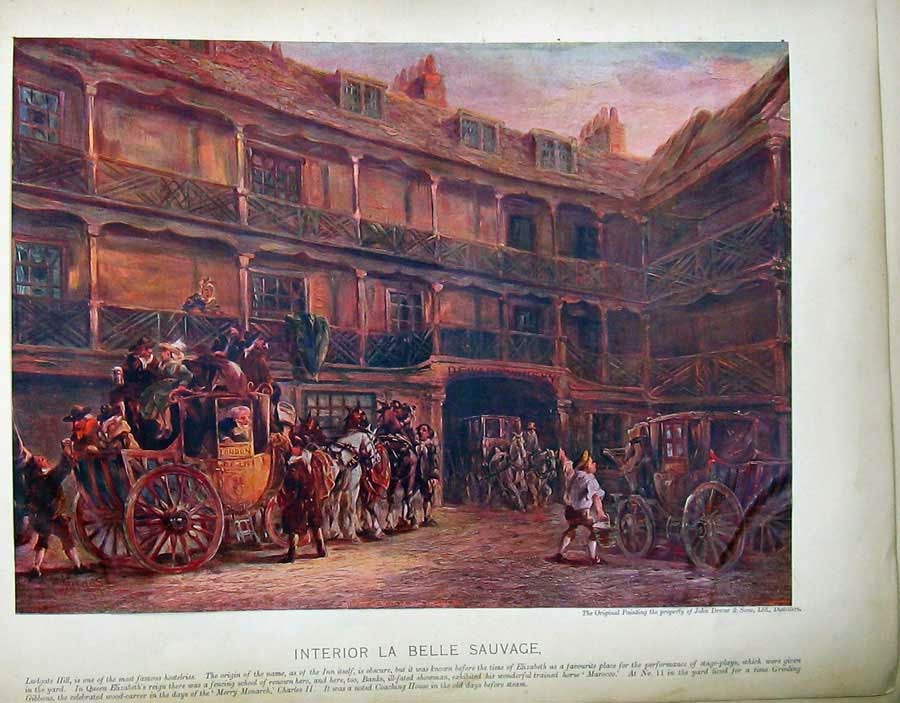