The three most exclusive gentlemen’s clubs during the Regency — White’s, Brooks, and Boodle’s — were all located on the same street (St. James) in London’s west end, and all are still in existence today.


But don’t expect to see any signs out front. 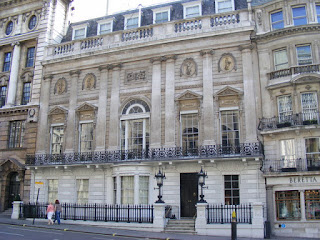 This is White's. See the famed bow window on the ground floor.
Most members of these private establishments in the borough of Mayfair come from the upper echelons of society. Their male ancestors have likely held memberships since the clubs moved to St. James Street in the late 1700's. When Prince Charles married Diana, he hosted his bachelor party at White’s. His son, Prince William, is also a member.


White’s, originally a chocolate shop in 1693, moved to 37-38 St. James in 1778. During the Regency it was strongly associated with Tories. Members could take their meals at the club, and they especially enjoyed the gambling, as well as White’s well-known betting book. The book recorded bets about battles during the Napoleonic wars and often included bets on prospective matrimonial partners. It was at the club’s famed bow window that Lord Alvanley bet a friend £3,000 (over $100,000 today) which of two raindrops would fall fastest.


Brook’s, founded in 1764 by a group of men which included four dukes, moved to 60 St. James in 1778. While many prominent men of the era held membership in both clubs, Brook’s was a bastion for Whig leaders such as Charles James Fox, the Duke of Portland and the Duke of Devonshire. The Prince Regent was a member. Like White’s, Brook’s also had a betting book. One of its most interesting entries is, "Ld Cholmondeley has given two guineas to Ld. Derby, to receive 500gs whenever his lordship f**** a woman in a balloon one thousand yards from earth." Boodle’s is located directly across the street from Brook’s. Established in 1762, Boodle’s has also boasted many famous members, including Beau Brummel. More recently (relatively speaking), it was author Ian Fleming’s club. He bases James Bond’s club on Boodle’s.


One of the chief attractions to gentlemen’s clubs was the select gambling. Gentlemen of their class always paid their debts of honor.
Posted by Cheryl Bolen at 5:30 AM No comments:

I've just finished my next Regency romance, Lady Chance, a book that is a follow up to Lady Scandal, and am getting it ready for publication, and the fun part has been digging into Paris of 1814. For the setting, the Palais Royal plays a part in the story, and it's both a beautiful (and still standing) structure, and one with a great deal of history. 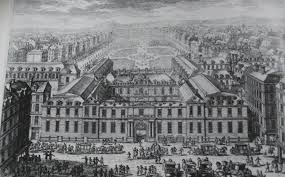 The Palais Royal was originally designed by Jacques Lemercier and built from 1629 to 1639 for the infamous Cardinal Richelieu (the one who is the menace in The Three Musketeers). The building was first known as the Palais Cardinal, but it became a royal palace after the cardinal bequeathed the building to King Louis XIII after his death.


After the death of Louis XIV, the duc d’Orléans became regent of Louis XV. The Palais Royal was then opened so the public could view the Orléans art collection, starting its history as a much more public building.

In the late 1700's, Louis Philippe II renovated the palace, surrounding the garden with a mall of shops, cafes, salons, refreshment stands and bookstores.

The Palais Royal also became a meeting ground for revolutionaries. During the Revolution, Philippe d'Orléans became Philippe Égalité and changed the building to be the Palais de l'Égalité. He opened the gardens to everyone and enclosed the gardens with regular colonnades.

Upon the death of the duc, the palace's ownership lapsed to the state, whence it was called Palais du Tribunat for a time.  But under Napoleon and his empire, the Palais Royal took back its name but continued its function as a place where anything might be had for a price. 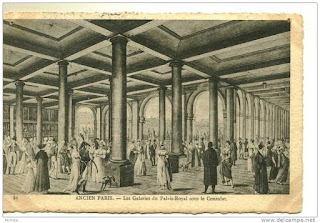 On the ground floor shops sold “perfume, musical instruments, toys, eyeglasses, candy, gloves, and dozens of other goods. Artists painted portraits, and small stands offered waffles.” The demi-monde could parade here in the gallery--alongside proper ladies--and the demi-monde often had rooms on the upper floors for their customers convenience.

While the more elegant restaurants were open on the arcade level to those with the money to afford good food and wine, the basements of the Palais Royal offered cafes with cheaper drinks, food and entertainment for the masses, such as at the Café des Aveugles. And the cafes were place to see, be seen, and plot. 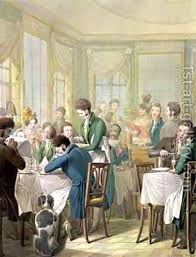 In 1807, the Palais Royal boasted “twenty-four jewelers, twenty shops of luxury furniture, fifteen restaurants, twenty-nine cafes and seventeen billiards parlors.” And that wasn’t all of the the shops. A theater occupied each end of the galleries, and the building offered some of the most popular cafés and restaurants in Paris, including Le Grand Véfour.


On the second floor, elegant card rooms offered deep play--these were the gaming rooms, both elegant and notorious for places where a young, rich man might lose his fortune.

During the Restoration of the Bourbons, the Palais Royal’s former gardens with its chestnut trees were enclosed by three large arcades, one of stone, one of glass and one of wood. The stone arcade still stands.

The Palais Royal became a shopping heaven for the English visiting in 1814--and they adored the restaurants and food (and the fact that ladies could dine on their own in the more loose society of Paris). And all of that made for some fun scenes in Lady Chance. I also had the chance to visit the Palais Royal, which still houses wonderful shops under the stone arcade.