Few symbols of Christmas are more admired than the Christmas tree, and nowadays, most countries that celebrate this holiday have their own version of Christmas trees. Before that, evergreens were a commonly hung adornment in homes, not just at Christmas but all winter.

Dating back hundreds of years, people in many countries hung evergreen boughs over their doors and windows, hoping to ward off witches, ghosts, evil spirits, and even illness. According to legend, it wasn’t until about 722 in Germany, that whole trees arrived on the scene. In the Middle Ages, the Germans and Scandinavians brought evergreen trees to the door or sometimes even inside their homes to display their hope that spring would soon come. It also symbolized eternal life.

One popular story about the origin of the evergreen being a Christmas tree tells of Saint Boniface who encountered a group of pagans about to sacrifice a child at the base of an oak tree. Appalled, and rightly so, Saint Boniface stopped the sacrifice and even cut down the tree to prevent future sacrifices. Later, a Fir tree grew at the base of that oak stump. St. Boniface took that as a sign and spread the word that the evergreen was a holy tree because its branches pointed to heaven as a sign that it belonged to the Christ child, and that the fir was a symbol of His promise of eternal life.

Another legend attributes Martin Luther the credit for the origin of the Christmas tree. In the 1500’s on Christmas tree, Mr. Luther took a walk through a snowy forest. The sight of the moonlight shimmering in on the snow-covered woods that starry night touched him so much that he cut down a small fir tree and brought it home for his family. They decorated the tree with small lit candles in honor of the birth of the Christ child.

According to All About Jesus Christ, The Origin of the Christmas Tree:

Research into customs of various cultures shows that greenery was often brought into homes at the time of the winter solstice. It symbolized life in the midst of death in many cultures. The Romans were known to deck their homes with evergreens during Kalends of January 15. Living trees were also brought into homes during the old Germany feast of Yule, which originally was a two month feast beginning in November. The Yule tree was planted in a tub and brought into the home. But there is no evidence that the Christmas tree is a direct descendent of the Yule tree. Evidence does point to the Paradise tree, however. This story goes back to the 11th century religious plays. One of the most popular was the Paradise Play. The play depicted the story of the creation of Adam and Eve, their sin, and their banishment from Paradise. The only prop on the stage was the Paradise tree, a fir tree adorned with apples. The play would end with the promise of the coming Savior and His Incarnation. The people had grown so accustomed to the Paradise tree, that they began putting their own Paradise tree up in their homes on December 24.

The Hanoverian kings, who were from a duchy of what became present-day Germany, adopted the use of Christmas trees -- the tabletop variety -- with real lit candles. While the candles were lit, a footman or a member of the family stood by with a water pot to prevent the risk of causing a fire.

Christmas trees came to England with the German Prince, Albert, when he married Queen Victoria in 1840, and brought his German Christmas traditions with him. In 1848, an engraving of the Royal Family celebrating Christmas at Windsor was published in the newspaper which showed Victoria and Albert standing with their children around a Christmas tree. Since the English adored Queen Victoria, the general populace adopted the custom of a Christmas tree with ornaments.

German immigrants brought the Christmas tree to America as early as 1747. Pennsylvania had the first record of one being on display in the 1830s. The average American in New England, however, rejected Christmas trees, viewing them as pagan symbols. Puritans viewed Christmas as sacred and shunned anything they considered frivolous. However, with an influx of German and Irish immigrants, the Puritans lost their power, further fueled by the illustrated version of the newspaper that had a sketch of the royals with their tree. After all, what was done at court immediately became fashionable—not only in England but with fashion-conscious East Coast American Society.  This combination eventually undermined the Puritan legacy. Never to do anything small, the Americans soon graduated from small table-top trees such as the Europeans used, to the floor-to-ceiling trees we know today.

As a Regency author, I seldom use Christmas trees in my stories unless I establish a family tradition with German roots for my fictional characters. But there are lots of other English fun traditions I discovered, after much careful research, that were honored, and that I include in my writing. Many of those traditions, including Yule Logs, Mistletoe or kissing balls, and other fun Christmas traditions went into my full-length novel, Christmas Secrets, available in print and ebook, and free on Kindle Unlimited. You can purchase your own copy, or give it as a gift, here:

A stolen Christmas kiss leaves them bewildered and breathless.

A charming rogue-turned-vicar, Will wants to prove that he left his rakish days behind him, but an accidental kiss changes all his plans. His secret could bring them together...or divide them forever.

Holly has two Christmas wishes this year; finally earn her mother's approval by gaining the notice of a handsome earl, and learn the identity of the stranger who gave her a heart-shattering kiss...even if that stranger is the resident Christmas ghost.

Grab your copy on here!

Don't have time to read a full-length novel during the holiday season? Check out these novellas, short enough to enjoy and romantic afternoon escape, and long enough to have a swoony happily ever after. 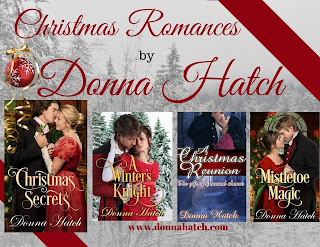 Posted by Donna Hatch at 5:37 PM No comments:

One of the problems of writing a Christmas story set in the Regency period is the fact that during about the early years of the nineteenth century, Christmas was celebrated almost not at all. Between 1811 and 1820 people seemed to not wish to commemorate the season very much at all. However, if one digs really deeply, you can find a few distinctive traditions that were observed during this most wonderful time of year.

The season itself was very different from our own, which now begins the day after Thanksgiving in the United States and is in full swing by December 1. In the Regency Christmastide began on Christmas Eve. This was the traditional day for going out into the woods (or to a shop in the city) to gather greenery to decorate the house with. Holly, rosemary, bay, laurel, and mistletoe were the traditional fresh greens brought in and either hung up (as in mistletoe) or draped around windows or mantlepieces. Mistletoe, then as now, was hung up all over the house waiting for couples to meet and kiss underneath it. The tradition was for each kiss, one of the white balls was plucked from the mistletoe ball. When no balls remained, that particular bough was finished. The Christmas tree, sadly, did not come into being until the Victorian age. One practice that most sources agree on was that it was a time for families to gather together with neighbors and friends. There 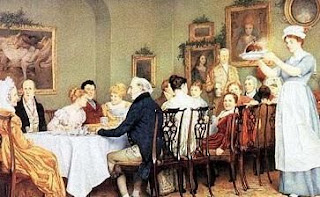 are many references to a big dinner on Christmas day that one either held in one’s home or was invited to dine with another family. The dinner was filled with rich meats like roast beef, venison, goose, pheasant, and swan or peacock. Bread based stuffing and vegetables such as potatoes, squash, and carrots rounded out the meal. The Christmas pie (mincemeat) and Christmas pudding were staples of the dinner as well. Charity was another tradition during the season. Those more fortunate were sure to celebrate it by sharing with those less fortunate. Gifts of food and drink and money were given to the poor. Wassailers and mummers paraded through towns performing songs or skits in exchange for foodstuffs and money. The day could also end with parlor games such as charades, blindman’s bluff, any number of card games, and the infamous Snapdragon. For this last, raisins were soaked in brandy, then the dish was lit on fire and everyone had to grab a raisin and eat it without getting burned. Obviously, you do NOT want to try this at home! 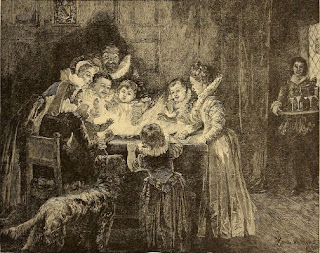 The celebration continued through Epiphany or Twelfth Night, on which day all the greenery had to be taken out and burned to avoid bad luck throughout the year. 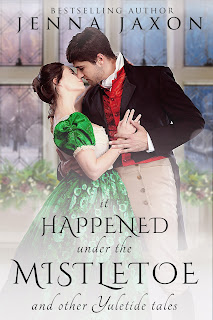 While writing six Regency Christmas tales, I’ve incorporated quite a few of these traditions including bringing in the greenery, parlor games, Christmas dinner, and of course, kissing under the mistletoe. My current release, It Happened Under the Mistletoe and other Yuletide Tales, contains five Christmas novellas in which mistletoe is prominently featured. The anthology is available on Amazon and Smashwords for just .99, a Christmas gift from me to you. Here’s wishing everyone a very happy holiday season! Sources: Beverley, Jo. Christmas Traditions in the Regency. Hoppe, Michelle J. The Regency Christmas Feast, 1999. Rowland, Jane. Regency Christmas Games. Austen Authors, December 12, 2018.
Posted by Jenna at 12:30 AM No comments: