Thanks to Diana Gabaldon’s Outlander series, many readers of romance know about the Jacobite Rising of 1745 and how the Scottish 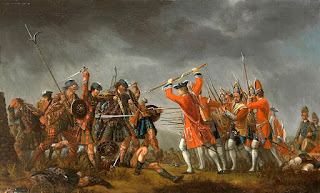 Highland clans were slaughtered on Culloden moor. This horrible defeat was only the beginning of the oppression suffered by the surviving clan members. As a subjugated people, the Scots were put under the yoke of British domination in many ways—taking their lands, burning, pillaging, taking their arms, and eventually taking away their most traditional form of dress. Issued on August 1, 1747, the Dress Act of 1746 states that “No Man or Boy, within that part of Great Britain called Scotland, other than such as shall be employed as Officers and Soldiers in His Majesty's Forces, shall, on any pretence whatsoever wear or put on the Clothes commonly called Highland Clothes (that is to say) the Plaid, Philabeg, or little Kilt, Trowse, Shoulder Belts, or any part whatsoever of what peculiarly belongs to the Highland Garb; and that no Tartan, or party-coloured Plaid or Stuff shall be used for Great Coats, or for Upper Coats;” 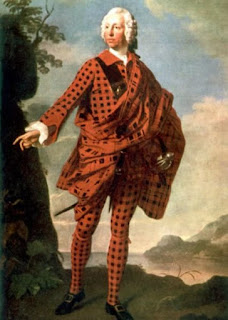 This Act, in one swoop, forbade the Highlanders from wearing not tartan plaid per se, but the garments that were usually made in tartan fabrics. This law was aimed specifically at the Highlanders, but it also affected Lowlanders, many of whom had fought on the British side in the Rising and who also wore tartans and kilts. The only men who it excluded were those serving in the British Army. The penalty for disobeying this law was severe: “and if any such Person shall presume after the first day of August, to wear or put on the aforesaid Garments, or any part of them, every such Person so offending, being convicted thereof by the Oath of One or more credible Witness or Witnesses before any Court of Justiciary or any one or more Justices of the Peace for the Shire or Stewartry, or Judge Ordinary of the Place where such Offence shall be committed, shall suffer imprisonment, without Bail, during the space of Six Months, and no longer, and that being convicted for a second Offence before a Court of Justiciary, or at the Circuits, shall be liable to be transported to any of His Majesty's Plantations beyond the Seas, there to remain for the space of Seven Years." 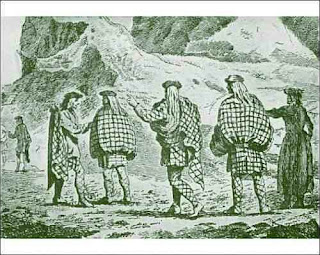 As a result, many Highlanders and Lowlanders joined the Army in order to be able to be exempt from the Act. There are, however, cases in which men were charged with wearing the kilt and tartan plaid and faced stiff consequences. In 1748 one young man in full Highlander dress drowned as he swam across a loch near Stathglass to avoid capture. A servant of Laird MacLean of Duart was arrested and imprisoned for six months for wearing Highland dress. Finally, in 1782 the Dress Act was repealed, but it had done its job. The Highland dress had become strange to the Highlanders and therefore was not worn as it had once been, a symbol of Scottish autonomy. 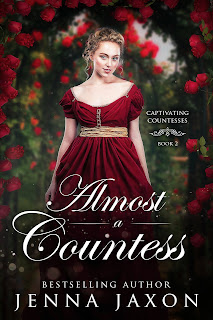 The Dress Act and its consequences figure prominently in my current WIP Almost a Countess. The heroine helps a Scotsman who has been arrested for wearing a kilt. After that, things get rather complicated. You can read the first chapter, on Amazon as A Solitary Ride here.
Posted by Jenna at 12:30 AM No comments: