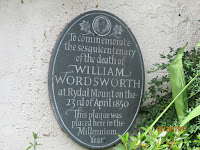 William Wordsworth was a poet whose life spanned the Georgian, Regency, and Victorian Eras. He and his beloved wife, Mary, and three children lived in Rydal Mount during much of his years as a poet. The Lake District where he made his home inspired many of his poems. 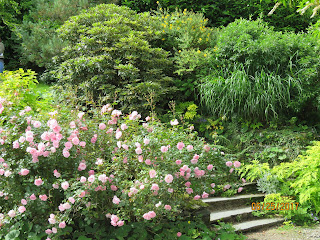 I was fortunate enough to visit Rydal Mount during a trip to England in June of 2017. Thought Wordsworth never owned this home, he rented it for many years. The home itself is lovely and beautifully furnished, but it was the gardens that really captured my attention. The Wordsworths loved gardening and created a lush, vibrant retreat in their four acre property, which William designed. He also designed the gardens for many of his friends and neighbors. 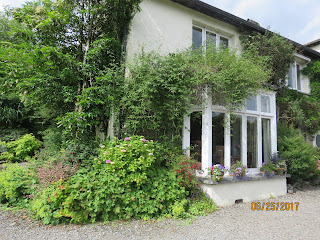 One garden is named "Dora's Field" which they gave to their only daughter. After her death at the early age of 43, William and Mary planted daffodils in the field to commemorate her life. The offspring of those bulbs survive today. In the spring, Dora's Field is filled with golden, cheerful daffodils.  Unfortunately, daffodils have a short blooming season and they were done by the time I visited.

One of my mother's favorite poems, which she taught me when I was child, is one of his. 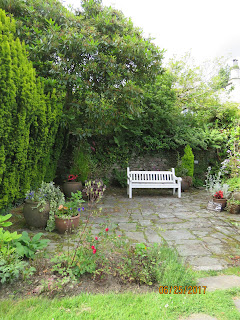 I Wandered Lonely as a Cloud, By William Wordsworth

I wandered lonely as a cloud
That floats on high o'er vales and hills,
When all at once I saw a crowd,
A host, of golden daffodils;
Beside the lake, beneath the trees,
Fluttering and dancing in the breeze.
Continuous as the stars that shine
And twinkle on the milky way,
They stretched in never-ending line
Along the margin of a bay:
Ten thousand saw I at a glance,
Tossing their heads in sprightly dance.
The waves beside them danced; but they
Out-did the sparkling waves in glee:
A poet could not but be gay,
In such a jocund company:
I gazed—and gazed—but little thought
What wealth the show to me had brought:
For oft, when on my couch I lie
In vacant or in pensive mood,
They flash upon that inward eye
Which is the bliss of solitude;
And then my heart with pleasure fills,
And dances with the daffodils. 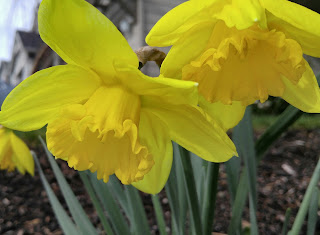 Making it Work: Women & Personal Care in the 1940s

In the late 1940s, one would imagine women had access to many of the conveniences for personal care that we have today, right? One glance at the popular rolled hairstyles that women did at home, without the use of a maid, makes one assume things had come a long way since the Regency and Victorian periods.

That’s what I thought too, until I sat down to fact check for my historical novel, Beneath the Bellemont Sky, which takes place on a Wyoming farm in 1946-47. Radios were common in nearly every household by then and we were on the cusp of many people owning a TV. Hairspray seems like a given, right? 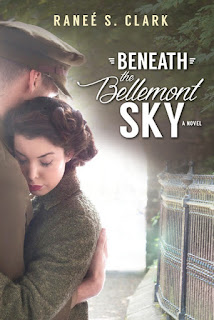 It wasn’t. The technology we’ve come to associate with aerosol sprays we use now was perfected for the use of insecticides during World War II, and using it on the sticky solutions that set hair styles didn’t become widespread until the 1950s. When the main character of Beneath the Bellemont Sky, Vera, fixes her hair for a fall festival, she has to rely on curlers and good luck for keeping her hair in place. Being thrust into the work place during World War II and beauty supply shortages, women’s hairstyles during the 1940s were utilitarian, and as the decade wore on, soft, brushed out curls became the go-to styles.


Setting up the perfect hairstyle wasn’t the only thing that took much more thought than we give it today. While writing the second section of the book, I assumed that it would be just slightly more complicated than it is in modern times for Eleanore, one of Vera’s friends, to find out that she was pregnant. After all, the forties weren’t that long ago! A few hours of research later, I realized it was much more complicated than even a trip to the doctor. Did you know that the at-home pregnancy tests we use today weren’t even developed until the 1970s? In the book, Eleanore has to rely on knowing her body as she suspects her condition. At that time, one of the only known ways to test if a woman was pregnant was to inject a sample of her hormones into a mouse and wait for a few days to see if it went into “heat.” The tests were long and expensive, and not something Eleanore would likely have access to or even choose to do.

We tend to think of the Roaring Twenties as the decade that “freed” women. Gone were the corsets and restrictive clothing—so it’s a bit surprising to look back and see that advances in personal care like hairspray and home pregnancy tests are fairly modern inventions!

You can find out more about Raneé S. Clark and her new book, Beneath the Bellemont Sky at www.raneesclark.com 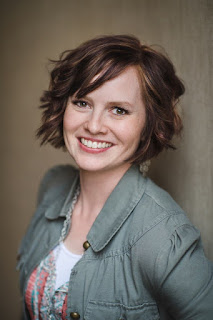 Find her on social media:"


“A Thin Blue Line: The History of the Pregnancy Test Kit,” National Institutes of Health, Office of History, history.nih.gov


Encyclopedia of Hair: A Cultural History by Victoria Sherrow, pages 183-184
Posted by Donna Hatch at 12:00 AM 2 comments: