Love in the Time of Plague by Jenna Jaxon

Although perhaps an unusual topic for romance novels, the Bubonic Plague or "Black Death" that swept through Europe during the Middle Ages, was a great agent of change both in the way people lived and in the way they viewed life. It has been used, my me and other romance authors, as a catalyst or conflict for heroes and heroines to cope with and rise above. With the current pandemic looming (of much less lethal proportions, thank God) I thought it would be interesting to look at the disease that in many ways changed the face of Medieval Europe. 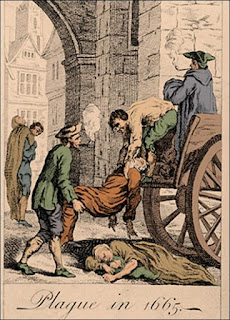 The Bubonic Plague originated in China in 1330 and spread through trade routes to the west via the fleas that live on rats. When the rats died, the fleas moved to other hosts, usually human, and infected them. The first major outbreak of plague in Europe began in Italy in 1347. By 1348 it had spread to France and England and by 1349 had circled the globe, killing approximately one third of the population of Europe.

There were actually three bacterial strains of the plague infecting people during the 14th century outbreak. The first and the one usually associated with the outbreak was bubonic plague, an infection of the lymph nodes. Symptoms onset occurred usually 2-5 days after exposure and included: fever, chills, headache, muscle pain, seizures, and painful swelling of the lymph nodes (called buboes). 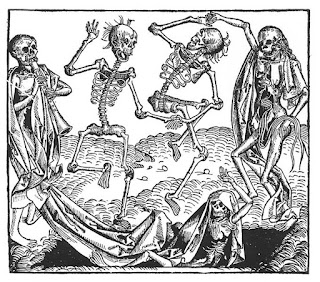 Mortality rate was approximately 50%. Treatments consisted of good diet, rest, and relocating to a non-infected area. If the swollen buboes burst, the patient often recovered.

One of the most prevalent images found regarding the bubonic plague is this one of a physicians’ costume during the epidemic. The beak contained herbs and flowers that the doctors inhaled to protect themselves. Flowers were considered a sovereign remedy for warding off the plague. According to Charles Mee Jr.’s article on the Black Death, people were encouraged to carry posies near their nose to “ward off the stench and perhaps the evil that afflicted them.” 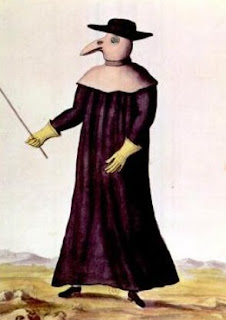 Fear of the plague made parents forsake their children, husbands abandon their wives. Finally the only people willing to nurse the sick were the nuns and monks in holy orders. Their numbers quickly became decimated because they worked intimately with victims of the disease and then became victims themselves.

Not the usual stuff of romance novels perhaps, but a fascinating look into a major epidemic that changed the face of medieval Europe.