The Frost Fair of 1814 by Jenna Jaxon

Winter days during the Regency were particularly cold as The Little Ice Age was in full swing during the early 19th century. In early February of 1814 the Thames River in London froze over completely and to a depth of more than eighteen inches, prompting what would be the final Frost Fair in London. 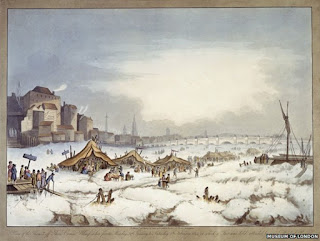 The first Frost Fair occurred in 1608, although the river had frozen over many times before that. This initial fair consisted of out-of-work watermen who erected temporary sheds out of blankets or canvas and sold hot drinks to passersby. However, the last time the Thames froze solid, the Frost Fair that occurred on its ice-bound waters was a huge carnival that lasted from February 1-4 and spread from London Bridge to Blackfriars Bridge. To open the fair and prove the ice was frozen solid, an elephant walked across the river. 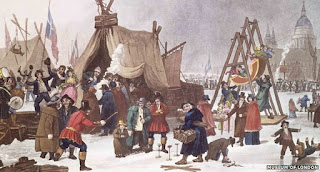 Like any fair or carnival there were many varied attractions. There were, of course, vendors with food and drink to sell. One popular type of stall cooked mutton or beef right on the ice and charged not only for the meat after it was cooked, but also for the privilege of watching it cook. Purveyors of nuts and fruits carried their wares around the fair rather than have a stationary stall. All manner of drinks were also sold: tea, coffee, hot chocolate, mulled wine, beer, and spirits. 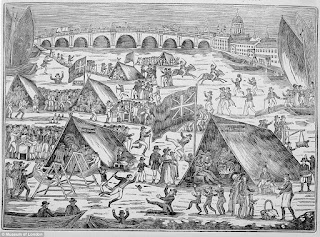 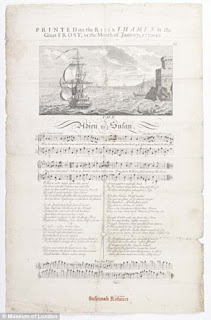 Souvenirs of all sorts were sold to commemorate the Frost Fair. Printers were moved onto the ice and printed customized souvenirs for customers. Also popular were any manner of items—from cutlery to cups to plates—were labeled with the information that they were purchased at the Frost Fair. One of the most unusual souvenirs was a piece of gingerbread, still extant, bought at this fair in 1814. 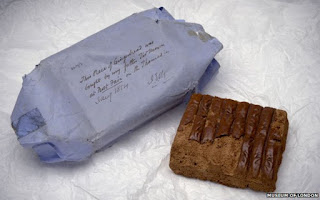 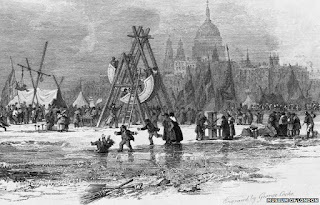 When one had eaten their fill and bought their souvenirs, there were any other manner of entertainment at the Frost Fair. Animal races, bear and bull baitings, donkey rides were part of the celebration. Games of football, skittles, and archery took place as well as ice skating. Rides were another part of the entertainment. Swings were erected and as well as a whirling chair ride. Acts such as jugglers, sword and fire swallowers, and stilt-walkers enhanced the carnival-like atmosphere. Another very popular entertainment was puppet shows. This stunning display of winter revelry came to an abrupt end when, on February 4th, the cold snap broke, the temperature moderated, and the ice turned back into rushing water. As soon as the ice began to crack and creak, most vendors pulled up stakes and hurried to the safety of the banks of the river, although a few left it too late and ended up with their stalls floating down the river. 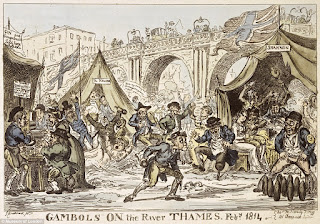 An extraordinary gathering that was destined, by the end of the Little Ice Age in the 19th century and global warming in the 20th and 21st centuries, to be the final Frost Fair.
Posted by Jenna at 12:31 AM 4 comments: