The second Viscount Palmerston (1739-1802), whose son served as Prime Minister in the 1850s and 1860s, exemplified the late Georgian aristocracy. He served for many years in the House of Commons and was at the center of society. He traveled extensively abroad, always with an eye to adopting Continental architecture and artifacts into his own beloved Broadlands, his country home in Hampshire. 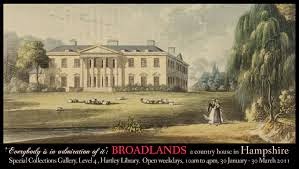 What makes him stand apart from other effulgent aristocrats of his day, though, is the rich legacy of letters (1,400), travel journals and appointment books (100 books) he left behind — some million words in all, a sixth of which is presented in Connell’s work.


It was through a most circuitous path that these papers saw publication. Since the Prime Minister Lord Palmerston had no legitimate issue, Broadlands fell to the second son of Palmerston’s wife, the widow of Lord Cowper, whom Palmerston did not marry until she was fifty. That son, William Cowper (said to have been sired by Palmerston), left no issue, so Broadlands passed to the second son of his niece, Evelyn Ashley. The estate eventually passed to Ashley’s granddaughter, who became the Countess Mountbatten.


The Countess Mountbatten found the papers at Broadlands in the mid 1900's while renovating the mansion and asked Brian Connell to edit them. His labors resulted in Portrait of a Golden Age: Intimate Papers of the Second Viscount Palmerston, Courtier under George III, published in 1958.

Critic Virginia Kirkus said their discovery “rates with the Boswell papers and the Walpole letters, and that recaptures a personality and period as vividly as does Cecil’s Melbourne.”


From Palmerston’s engagement diaries, it is possible to know with whom he had dinner every night of his adult life. His range of friendships included an astonishing roster of the great names of his era from Voltaire to Lady Hamilton to Prinny. His works are rich with records of prices he paid for items as well as serving as a glossary of medicinals of the era. Palmerston himself prefaced his diaries, “As these books may be considered as the anals of a man’s life, and may be of use even after his decease, they ought by all means to be preserved.”


Few of the entries are intensely personal, but the following one chronicles the death of his first wife, who died in childbed two years after their marriage:


Lady Palmerston was taken ill with a feverish complaint. Two days afterwards she was brought to bed of a dead child. She was tolerably well for some days, but a fever came on suddenly which made a most rapid progress and on the fatal 1st of June terminated the existence of a being by far the most perfect I have ever known; of one who possessing worth, talents, temper and understanding superior to most persons of either sex, never during my whole connection with her spoke a word or did an act I could wished to alter.


These diaries shed so much light on the practices of the day. For example, weddings were no big deal. Families often did not attend. The well-placed Lord Palmerston wrote the following to his mother prior to his first marriage:


I should have wrote to you a little sooner but could not have given you any certain notice of the time of my being married, but have the pleasure to tell you that before you read this, you will in all probability have a most amiable daughter-in-law, as I believe I shall be married tomorrow.


We should all give thanks to Countess Mountbatten and to Brian Connell for giving us such a work.
Her Broadlands—which the 2nd Lord Palmerston so lovingly restyled in the Palladian manner favored by the Georgians—has been closed for several years for restoration. It now belongs to her grandson, Lord Brabourne and will reopen to the public during the summer of 2015. Many of the family archives have reportedly been sold to the University of Portsmouth. What a privilege it would be to see both Broadlands and the archives!—Cheryl Bolen's second book in the House of Haverstock series, A Duchess by Mistake, releases on April 7 and can now be preordered.
Posted by Cheryl Bolen at 6:30 AM No comments:


It's spring--almost! With Valentine's day here, you can read up on a History of Valentine's Day over at Jane Austen's World. 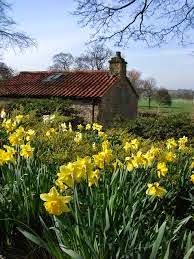 But let's look ahead to March and the coming of spring.

January was not always the beginning of the year—an older tradition began the year in March.

In March, Lady Day, March 25, was the traditional day for planting and hiring farm laborers for such work. In the church calendars, this day was set as the Feast of the Annunciation, when the angel Gabriel visited the Virgin Mary to tell her about her upcoming role. This was also the traditional day for when yearly agreements might end or need renewal—it was the old day for the first day of the year. This made it one of the main quarter days.

The quarter days were when servants were hired, rents were due, and assizes were held in the Assizes Towns, over Assizes Week. Assize comes from the Old French and meant that judges traveled the seven circuits of England and Wales, setting up court. 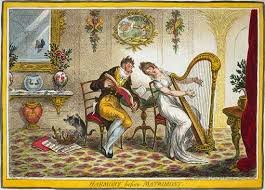 Eggs have been associated with fertility and new beginnings for a very long time. And the hare is also an ancient symbol used since the Middle Ages by the Church. In 1290, King Edward I of England actually ordered 450 eggs to be gold-leafed and colored for Easter gifts. 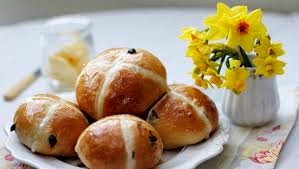 Hot Cross Buns are also an old tradition in England. It is said they were made by Saxons to honor their goddess Eostre, with the bun represented the moon and the cross the moon's quarters. But at Easter the cross symbolizes the crucifixion. They’re traditionally served warm on Good Friday.

In England, Maundy Thursday, is the beginning of Easter celebrations and commemorates the Last Supper. The name comes from the Latin, mandatum (relating to Jesus’ commands to his disciples). Up to 1689, the king or queen would wash the feet of the poor in Westminster Abbey. Food and clothing were also handed out to the poor. Maundy coins—specially minted—were also given out to pensioners.

From the fifteenth century on, the amount of Maundy coins handed out, and the number of people receiving the coins, was tied to the years of the Sovereign’s life and given to celebrate specific events. The Yeomen of the Guards carry the Maundy money in red and white leather purses on golden alms trays on their heads.
Posted by Unknown at 4:16 PM No comments: