Though it was demolished 90 years ago, Devonshire House was one of London's most fabulous aristocratic homes for a couple of centuries. One of the things that set it -- and a handful of other aristocratic homes -- apart from typical town homes of the nobility was the plot of land that surrounded it. While many of London's grandest houses were terraced (what Americans might refer to as "row houses"), Devonshire House sat on three choice acres on Piccadilly, with a view of Green Park from the front and a view to the garden of Berkeley Square from the rear (across the gardens of Landsdowne House). 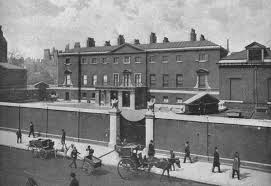 As with Melbourne House (now Albany), Burlington House, and Landsdowne House (all now significantly altered), Devonshire House was entered through gates large enough for a carriage to pass, and gardens and outbuildings were located within its walls. 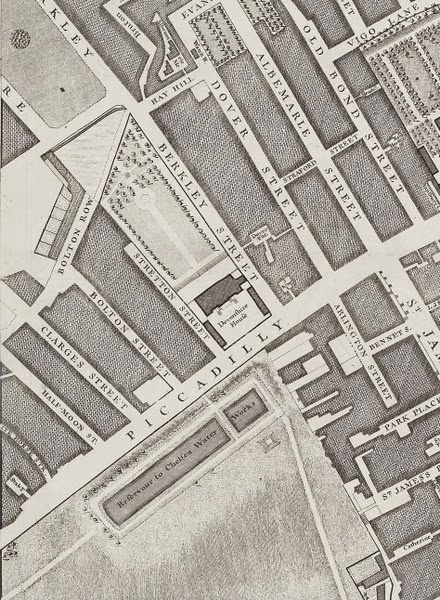 This 1746 map shows the extensive gardens behind the Piccadilly mansion, stretching almost to Berkeley Square.


Today, the gates of Devonshire House have been relocated across Piccadilly to serve as an entrance to Green Park. 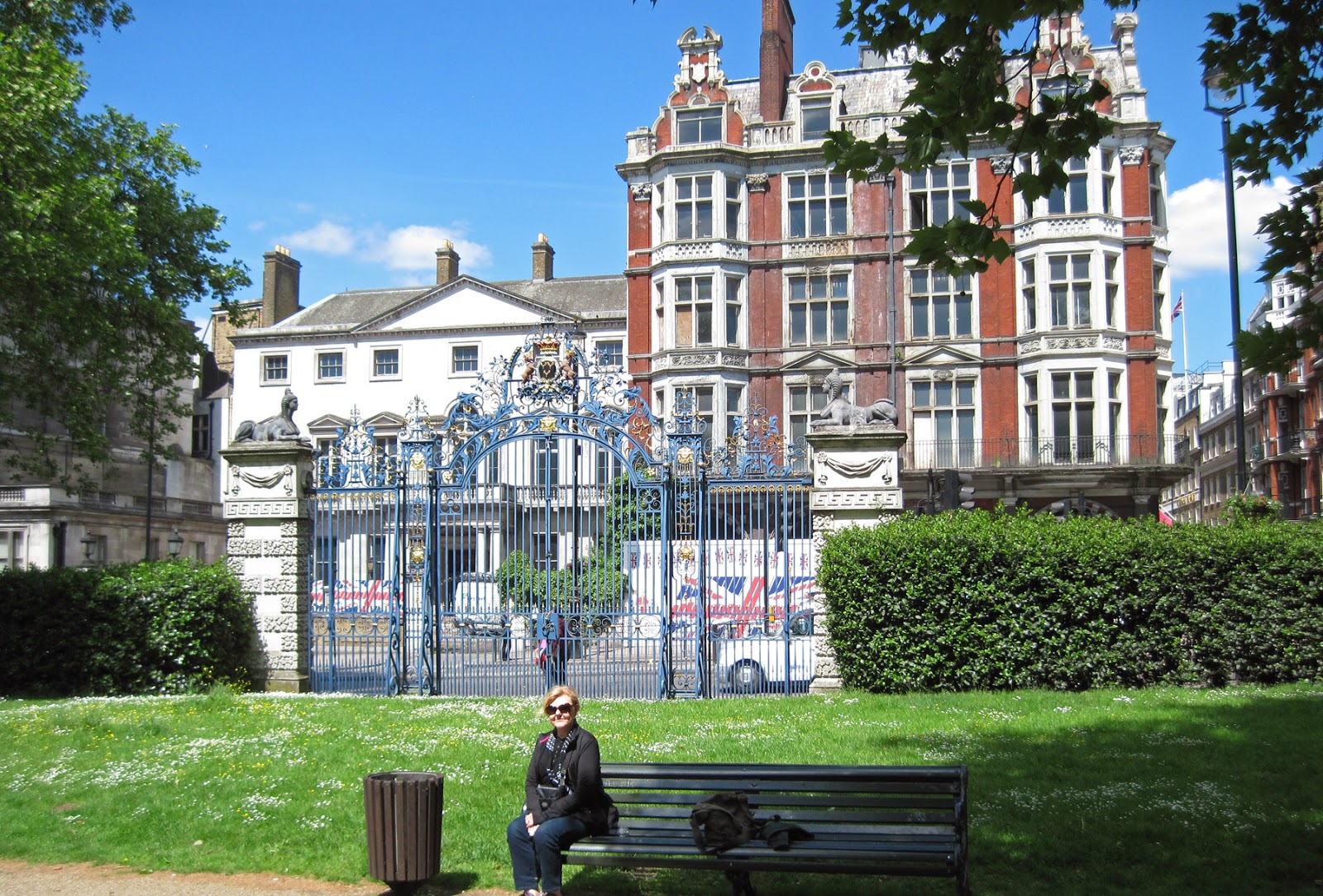 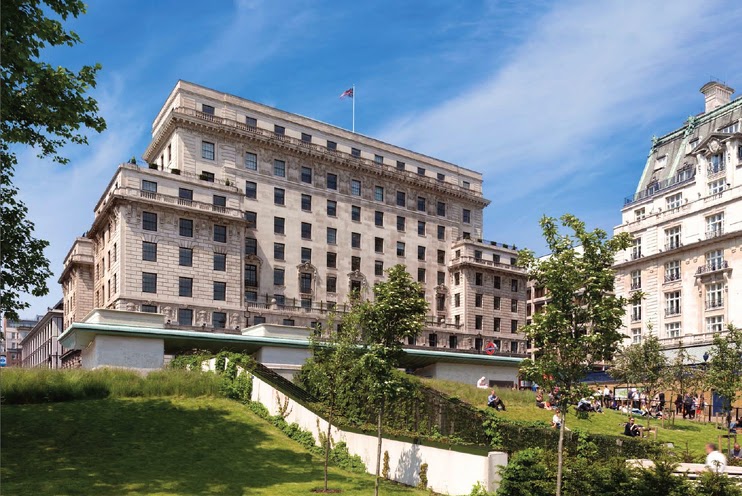 (In the photo above, taken from Green Park, the French-looking Ritz Hotel is on the right, abutting Green Park, and the office building that replaced Devonshire House in the 1920s is the larger building in the picture. The white structure in front of it houses ticketing for the Underground.)


Home to the Dukes of Devonshire, the Palladian house was completed in 1740 for the 3rd Duke, with William Kent serving as architect. This structure replaced the former Berkeley House, which burned. Berkeley House, bordered by Piccadilly and Berkeley Street, had been built in 1665-1673 by Lord Berkley and was later the residence of Charles II's mistress, Barbara Villiers, before the 1st Duke of Devonshire bought the classical mansion.


Though the exterior of Kent's Devonshire House was plain, the interiors were said to be sumptuous, with a 40-foot long library the highlight of the three-story house. It also housed what was said to be the finest art collection in England. Many of these paintings can now be found at the current duke's opulent country house, Chatsworth House.


Devonshire House was famed in the late 18th century as the nucleus of Whig politics, presided over by the duchess Georgiana, wife to the 5th duke. A hundred years later a grand dress ball to celebrate Queen Victoria's diamond jubilee was held there. Also during Victorian times, the house was altered by James Wyatt, who was one of the most fashionable architects in the late 19th century.


Following World War I, Devonshire House was abandoned in 1919 as the 9th Duke was the first to be required to pay high death duties. These amounted to £500,000 (approximately $16 million today). The 9th duke sold off much of his fine library, including a Caxton and many first editions of Shakespeare. In 1921, he sold Devonshire House and its three-acre garden for $750,000. The house was demolished in 1924, and an office building--also called Devonshire House--now stands on the site.--Cheryl Bolen. See www.CherylBolen.com for more articles.
Posted by Cheryl Bolen at 5:18 PM 1 comment: 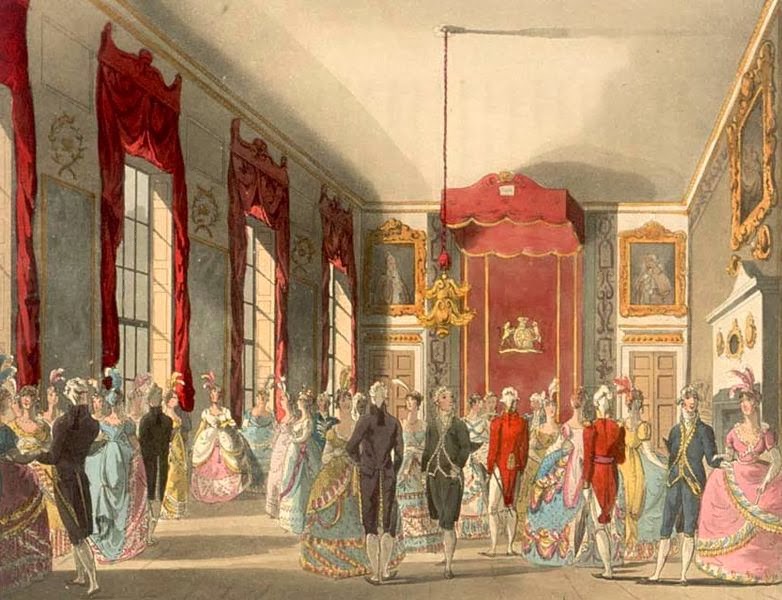 Spring is in the air--almost. It's certainly coming and spring holds many holidays for Regency England. But let's look first at the very important quarter days and the overall English calendar year.

The most ancient of calendars are based on solar and lunar events. This gives us, in England:

* Fourth cross-quarter day, also known as All Hallows or Samhain

These dates were important for farming and rural life since they were based on the seasons; religious holidays were formed around these dates, including those of the church.

In March, Lady Day, March 25, was the traditional day for planting, and hiring farm laborers for such work. In the church calendars, this day was set as the Feast of the Annunciation, when the angel Gabriel visited the Virgin Mary to tell her about her upcoming role. This was also the traditional day for when yearly agreements might end or need renewal—it was the old day for the first day of the year. This made it one of the main quarter days.

The quarter days were when servants were hired, rents were due, and assizes were held in the Assizes Towns, over Assizes Week. Assize comes from the Old French and meant that judges travelled the seven circuits of England and Wales, setting up court.

Eggs are associated with fertility and new beginnings. And the hare is also an ancient symbol used since the Middle Ages by the Church. In 1290, King Edward I of England actually ordered 450 eggs to be gold-leafed and colored for Easter gifts.

Hot Cross Buns are also an old tradition in England. It is said they were made by Saxons to honor their goddess Eostre, with the bun represented the moon and the cross the moon's quarters. But at Easter, the cross symbolizes the crucifixion. They’re traditionally served warm on Good Friday.

‘I’ll to thee a Simnell bring
‘Gainst thou go’st a mothering,
So that, when she blesseth thee,
Half that blessing thou’lt give to me.’
--Robert Herrick, 1648

In England, Maundy Thursday, is the beginning of Easter celebrations and commemorates the Last Supper. The name comes from the Latin, mandatum (relating to Jesus’ commands to his disciples).
Up to 1689, the king or queen would wash the feet of the poor in Westminster Abbey. Food and clothing were also handed out to the poor. Maundy coins—specially minted—were also given out to pensioners.

From the fifteenth century on, the amount of Maundy coins handed out, and the number of people receiving the coins, was tied to the years of the Sovereign’s life and given to celebrate specific events. The Yeomen of the Guards carry the Maundy money in red and white leather purses on golden alms trays on their heads.

Of course spring also meant a return to London for the start of the Season and all it's social whirl.
Posted by Unknown at 3:45 PM No comments: 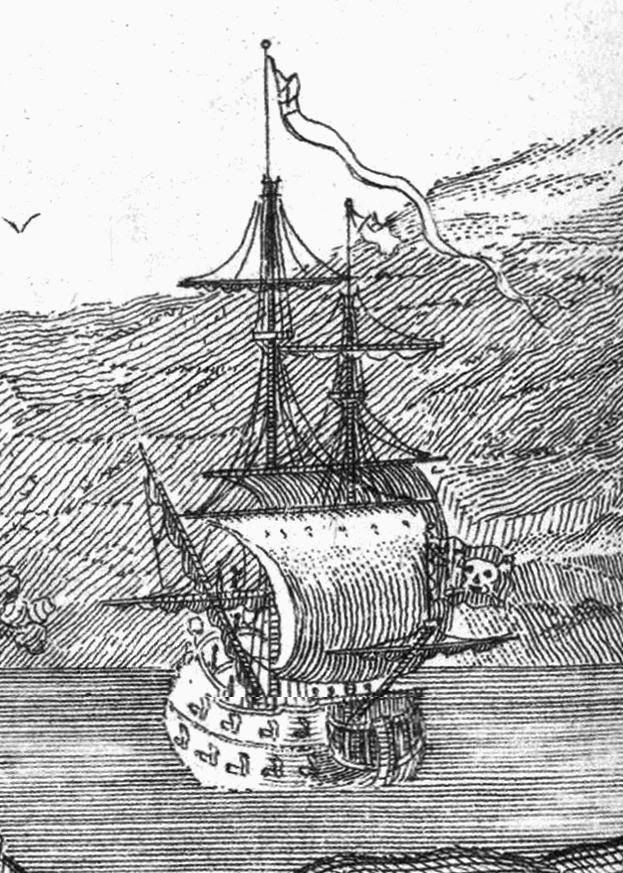 by Donna Hatch
During the golden age of piracy, most pirate ships were However, when I wrote my pirate regency romance, The Guise of a Gentleman, I patterned my hero’s ship after the vessel sailed by the nefarious pirate, Blackbeard.
Blackbeard’s flagship was a 300-ton English frigate built in England in 1710 christened Concord. A year later, the French captured her, modified her for larger cargo capacity, and gave her a new name, La Concorde de Nantes.
About six year later, she was captured and found herself the property of the widely feared and certainly fearsome pirate known as Blackbeard. It is commonly believed that the true identify of Blackbeard was Edward Teach, although I've read enough experts who question this theory that no one appears sure who he really was. Regardless of his real name, the pirate Blackbeard added additional cannon, since he preferred to attack with the power of a warship rather than with stealth and speed preferred by most pirates. All these modifications changed her silhouette to more closely resemble ships built by the Dutch during that era. Once again, she was given a new name—this time, she became know as the Queen Anne's Revenge a feared name indeed.

Different theories circulate as to the reason for this unusual name. It might have come from Edward Teach's reported years of service in the Royal Navy during a war known as the War of the Spanish Succession, which the American colonies called the Queen Anne's War, in which Blackbeard had served. Perhaps he felt some sympathy or loyalty to the last monarch of the Stuarts. After studying him, I doubt sympathy was in his nature; it was probably some kind of cruel joke.

While in command of the Queen Anne’s Revenge, Blackbeard terrorized the seas from the west coast of Africa to the Caribbean and he took 18 ships as his prizes. The Queen Anne's Revenge is the largest known, and certainly the most infamous, pirate ship that sailed the Spanish Main and played the staring role in the historical stage of piracy in the Americas.

Because my hero, Jared Amesbury, was such a feared and well-known pirate in my Regency romance novel, The Guise of a Gentleman, I decided to pattern his ship after Blackbeard’s. In fact, Jared, known as Black Jack, and his crew spread many rumors of his cruelty to those to defied him to instill fear and inspire surrenders. Some of these atrocious tales which Jared invented were in fact those that Blackbeard and his crew reportedly committed. My hero never commits those acts he claims to have done, and, in fact, has a high code of honor regarding the treatment of prisoners and the protocol of boarding ships. After studying pirates, I doubt many pirates actually held to such high ideals. Still, pirates have always captured my imagination. Arrgh, matey!
Posted by Donna Hatch at 12:01 AM 1 comment: