Any well-heeled gentleman knows the importance of being well-turned out, if he hopes to catch the ladies' eyes, or even be accepted among their peers. Here are what Regency Romance Novel heroes would wear, based on what they really wore in Regency England.

BREECHES
Breeches, (pronounced britches) by the Regency era were considered old-fashioned. They are very baggy through the hips and seat. The exception was buckskin breeches, which are made of leather, and were quite tight, even being well molded to the body, like Levi's. That actually paints a nice visual, doesn't it? ;-)

Most breeches had a front fall which is a flap that covers the front opening. Early in the era the flap was a wide fall, going all the way across from hip to hip (think of the outer seam of the pants we wear today). Later, the fall narrowed, going only from hip-bone to hip-bone. Both falls worked in exactly the same way; the waistband buttoned, usually with 2-3 buttons, then the fall closed like a bib over the otherwise open front area of the pants.

Side by side drawing of wide and narrow falls which comes from:
http://www.pemberley.com/images/Clothes/widefall-and-narrowfall2.jpg 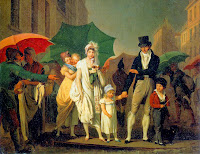 There was a style called the "French fly", which is a simply a center front fly, but most Regency Englishmen didn't wear this style because they felt the French fly was somehow indecent and shouldn't be seen. In the painting "Passer Payez", Boilly c. 1803. The gentleman in the center is wearing breeches with a "French fly" which, isn't a suprise since it's a French painting. I think it's more flattering. This picture was taken from http://www.pemberley.com/janeinfo/passpaye.jpg

Men in Regency England didn't use belts. Instead, pants of all types would have been held up by "X" crossed braces (suspenders). In England it had to do with the length of the waistcoat. When the waistcoat was long enough to cover the front of the trouser, you saw both front-fall and French fly configurations. When fashion shortened the waistcoat, the front-fall was the most popular method of closure. Personally, I don't see much difference in modesty but at the time, it mattered. Shrug.

Back views of same. See how baggy it is?
http://www.pemberley.com/images/Clothes/back-of-breeches.jpg 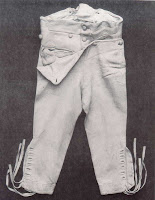 1790s breeches, with a close up of the fastening which hides a pocket. 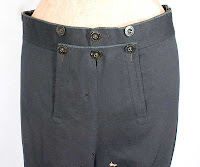 These are the slimmest breeches I've ever seen, and these were made by a reenactor. See how they are still much baggier through the hip than pantaloons?

These breeches are from Sense and Sensibility. Note now baggy they are, and how the fall gapes when the man bends over; Edwards are baggier than Willoughby's, Edward being more conservative in manners and dress, so that's a nice detail. 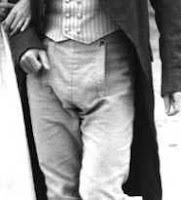 Buckskin breeches were the jeans of the 19th century. They were comfortable and generally fairly form-fitting, so in my humble opinion, flattering. This is circa 1815. In the detail shots that the waistband comes up higher than the fall, and that the knee has both buttons and ties. This one is my favorite.

On my next post, we'll discuss pantaloons for the Regency Gentleman. 'til then!
Posted by Donna Hatch at 1:22 PM

Always nice to see good pictures of men's clothes-- and men wearing them.

I wonder how the satin or velvet evening breeches were tailored. Bagginess probably wouldn't be appreciated. Are there any originals extant? Paintings are useful, but there is nothing like seeing the originals. Thanks for the information!

Good article. It's refreshing to see an article where a girl admits that a) girls control the dating scene and b) girls often pick guys who "know how they love underwear" rather than choose quality underwear. I can't tell you how many of my girl-friends say something to the effect of "I don't know what I saw in that jerk!" Stuff like "The Pickup Artist" works...but its because it relies on psychology and manipulation. Not something to emulate, in my opinion.
Girls, give that cute, if not shy and awkward, guy a chance! He might be the one you're looking for!
replica watches
replica watches

Great article, very informative. I have a pair of late 18th century mens breeches for sale right now on ETSY. My user name is rayovintage, you do not find these very often!

I just accros from your blog and I thought I would have to leave my first comment after reading your great article on man's cloth's design, I love it all.
Its a great blog.
online mens clothing stores

I had been searching for the exact breeches you described, buckskin. And it fitted so precisely because in my mind I was searching for the breeches that most easily replicated Levi's, not the baggy nor the saddle ones made of fake materials.
Thank you for what you have contributed in thought and onsight.

Hi, I m getting married sson and my Fiance is mad about Jane Austen and I thought it might be nice to make an effort and get a regency style jacket to wear but am having real trouble finding anything suitable. Can anyone help me track something down, preferably in a dark royal/navy blue? Thank you.

Even I have the same problem with you, its so hard to find regency style jacket.

When it comes to men’s clothing the first thought which sparks in my mind is designer jeans. Anything will be suitable with designer jeans might be tees, shirts, jackets or blazers. Men in designer jeans look cool and handsome! חליפות חתן

Where can I find a pattern for "sailor front" long breeches? Fife & Drum in CT uniform part. I can modify if necessary.

I want to congratulate you for your creation. They are looking great. Keep up the good work.

These Jodhpurs are baggy from waist to knee and are tight from knee to ankle.

design of these pants are very different from normal pants that we wearing on our daily life. Underwood Watch Winder

I really enjoy reading your blog,you have beautiful pics!!

The contents of this article is very interesting, I am willing to read it, thank you it brings me happiness. Baggy jodhpurs

What type of clothing would Downeast Mainers wear to climb mountains? My female character will wear men's clothes to climb Schoodic Mountain. Any suggestions would help.
www.intertwinedlove.wordpress.com
www.carolyncholland.wordpress.com
chollandnews@yahoo.com

Post is absolutely wonderful! We are full of great information and inspiration both for all you need! In addition,
you want to admire the time and effort put in more information you provide to your blog. See more in this address: discount mens designer clothes

Its always good to such pictures.Great article to go through.To get Best Mens wear online we have to be very selective always

breeches weren't in fact baggy a very nice fit can be achieved with a correct cut,and it's perfectly possible to move, walk and sit down in them if made properly and won't split. By the regency period the pleated bottom had disappeared and there was a very smooth line

please don't use the film versions as period examples they are badly cut. Pantalons also weren't always cut on the bias and those made from moleskin were more like the jeans of the day and more affordable than buckskin

off the peg patterns also suffer from this, as they have to cater for a multitude of his, you are better off making your own using cut of men's cloths as a guide

Great! I recently found an amazing site for men's clothing. It's http://www.flatsevenshop.com/ and you can find very stylish stuff there!

Mens Street Fashion is a leading brand name in Mens Clothes.We have wide variety of men’s fashion wear and accessory including Mens Shoes Mens Clothing in usa, Mens Hair Mens Bag comes up with the latest and trendiest varieties of Mens Blog accessory and all that in California, USA. Mens fitness in California, Mens Collection Mens Elegant Style More Details About Mens Health at www.menstreetfashion.com
oin

Mens Street Fashion is a leading brand name in Mens Blog.We have wide variety of men’s fashion wear and accessory including Mens Fashion Tips Mens Clothing in usa,Mens Shoes Mens Bag comes up with the latest and trendiest varieties of Mens Blog accessory and all that in California, USA. Mens fitness in California, Mens Collection Mens Fashion Tips More Details About Mens Clothes at www.menstreetfashion.com


The Liberty Center store will feature women and men’s clothing, and a separate “store within a store” section for accessories, maternity, sport apparel and its plus sized line, “H&M +.”

Before we decide whether men should wear fashionable nightwear, we need to make sure that men's nightwear can look good? After all, how cool can pyjamas look? For many years the standard outfit has been the matching trouser and jacket, which looks like men are going to sleep in a rather untidy suit.

For all-round advice and latest trends in male fashion I use Theo Blix. They are always up to date with the newest tendencies and I truest them when choosing clothes

yes you are right but what about custom kilt

Thanks for sharing this with us. It's amazing !! If you are looking for men's outfits at an affordable cost then you must visit Kidoriman.

We really enjoy your blog. Your written content is very excellent. If you want to get some information about Japanese men's fashion, you can visit our online store Kidoriman Reviews. Here you will get information about every new fashion going on in Japan.

leather pants for men are now available in a different Varieties so place your order and gets the jackets according to your requirement.

I'm studying prizefighting (boxing) in Regency England and I am trying to reconstruct the clothing worn by these me. They appear to wear regular breeches and stockings (stripped above the waist). However the shoes are causing me problems.

They appear to wear a low cut heeless shoe (shaped like a modern ballet pump) that is tied with either laces or a ribbon. Somebody told me they look like Regency mens dancing shoes. Was there such a thing?

This is a wonderful blog which I have read just now. The content is very nice and informative thanks for sharing this with us. I`m sure you will also like my online store. Visit my website also. I`m from Black Wood for Men - The Best Men Skin Products in USA.

it's great post. Thanks for sharing with us
Shorts for Men | Boxers For Men

This post is adorable, and I love it! Get the best price Mens Swimwear. Great selection of Xmen Go at the guaranteed lowest price. Click here to see all of our exclusive deals on Mens Swimwear.

Thanks for sharing. and don't forget to check the latest article design of
Motorcycle Jacketes