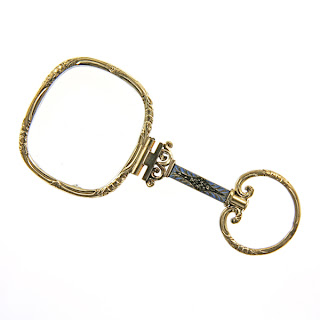 Spectacles, or eyeglasses as we know them today, have experienced a big transformation since their inception over 800 years ago. The glasses which rest on the nose and ears were invented by an Englishman named Edward Scarlett in 1727. But they weren't considered fashionable by the beau monde, so other devices were used.

During the Regency Era, a very popular item was a "quizzing glass," a single magnifying lens with a handle that the user held up before their eyes improve their vision of a particular object.

About the 1750’s, quizzing glasses became a fashion accessory and were worn like jewelry. Since 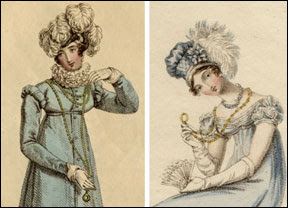 eyeglasses were unpopular, at least in public, the quizzing glass was a socially acceptable substitute. The quizzing glass was attached to the end of a long ribbon or chain and worn around the neck. A person could then hold up his or her quizzing glass to "quiz," meaning to stare, glance, or look quizzically at people. They were also used to stare at another person through the quizzing glass as a way of setting down or insulting him or her. Reportedly, Beau Brummell used this maneuver to show his disapproval of a person which could be disastrous to that person’s standing in the ton. In the movie The Scarlet Pimpernel, the hero performs this move beautifully with anyone he finds irritating. And the message comes across loud and clear.

Quizzing Glasses were not limited to people with poor eyesight; according to fashion prints, young women of fashion commonly wore them.

Some people used a lorgnette, which has two lenses,
is also hand-held, and was prescribed by an optometrist. (I know, who knew those doctors have been around so long?)
Although Quizzing glasses were the most popular somewhere during the 1800 to about 1830 or so, then, by the 1830s, lorgnettes became a more popular choice for women.

For gentleman of fashion, quizzing glasses continued as a popular accessory until about the early 1900’s after which monocles replaced them. A monocle had a single lens which fit into the eye socket and appeared to be more popular with the men and had a chain or ribbon instead of a handle.

To read more about Quizzing Glasses, or to view an impressive collection,I highly recommend Candice Hern's website. She has lots of other fun collections, too.

Though today's eyeglasses certainly don't to offer the same flair as quizzing glasses and monocles, when I'm reading, it's nice to have my hands free.
Posted by Donna Hatch at 12:01 AM

I wonder if people's eyes were better back then? I can't imagine what my world would be without them. Although I liked how they insulted people with them lol.

There are moments in my life right now in which I think a good glare through a quizzing glass would be appropriate!

I'm with you, Audra, an effective but classy way of giving someone a good set-down.

It is generally believed that when it comes to men, they look for a comfortable grip and long-lasting pair of glasses. Style comes next to these two. And again, in most of the cases it is the man's female companion who purchases the glasses for him. Since comfort is the most important factor, if the glasses are bought from a retail store, one should always ask the man for whom it is bought for, to put the pair on and check the grip.

If we are planning to buy eye glasses, be sure to buy the brand that offers excellent products because our eyes in very important.
Furrybears

Hello there... My partner bought me a 'Quiz' just like the one in the picture for my 50th! Great to read all about it... Thank you :) Cate from Adelaide South Australia


IVM Optical Store is one of the best optical stores for those who want to experience shopping for Brampton eyeglasses and sunglasses in Brampton. We know that it is not sufficient to provide customers with just the worth for their money but they should be provided with whole package; value, outstanding customer service and advanced professional services.
Visit here for:

I found this very helpful when I read about quizzing glasses in a novel and didn't know what they were. Thank you!

Here is the beautiful Sunglasses on Amazon I like so much: https://www.amazon.com/s?k=sunglasses+for+men&me=A39PH15OSSYYUG&ref=nb_sb_noss

I really happy found this website eventually. Really informative and inoperative, Thanks for the post and effort! Please keep sharing more such blog.
Cheap Assignment Writer

I didn’t feel like there was really any closure or idea where it was going and was a little disappointed with it. glasses

Buy a wide range of Eyeglasses for Man Online at Meetoot. It is generally believed that when it comes to men, they look for a comfortable grip and long-lasting pair of glasses. Style comes next to these two. And again, in most of the cases it is the man's female companion who purchases the glasses for him. Since comfort is the most important factor, if the glasses are bought from a retail store, one should always ask the man for whom it is bought for, to put the pair on and check the grip.

This article has so much of information Buy chocolate truffles Dammam

Excellent article, You have summerised important points, keep it up. Thank you home renovation services dubai