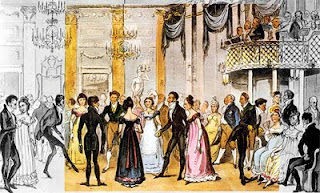 The Cut or Cut Direct

The term "cut" or "direct cut" is an English term which means a public snub. That term was used in the Regency, and it still in use today, so my British friends tell me. People who pretend they didn't see someone, when they clearly did, have cut that other person. An ordinary cut is less of an embarrassment than a cut direct, and less insulting, because it might be explained away by saying, "She didn't see me."

A cut direct, however, was a much greater insult, and impossible to explain away. If two people make eye contact, leaving no doubt whether or not they've been seen, and then one turns away without any acknowledgment, he or she has just given the cut direct. If this happens in public, at say, the promenade or a ball, the person being cut is more humiliated because there were more witnesses to the snub.

I've also read in older Regency Romance novels the term "cut him dead" which refers to making eye contact while in close proximity, and not across the room, and then turning away...all in a very public place.

A young lady who wishes to discourage the advances of unwanted or persistent suitors might use this tactic, but those with higher sensibilities may not have wished to be so hurtful or cause such humiliation. I'm sure a great number of cuts and cuts direct were dished out by those who were either just plain mean-spirited or had a strong grievance against the other person...just like today, only we don't use that term.

I like using these terms in my Regency romance novels because they, among other things, help create that believable Regency feel.

Do you have a favorite historical term?

Funnily enough, we still use that expression to 'cut him (or her) dead' here is Scotland (and I imagine the rest of the UK).

Well that just goes to show that I'm an American. So glad to know that it's still in use so I don't over explain myself! Thanks!!!

A famous cut was when the Prince of Wales "cut" Beau Brummel. Brummel was out, and everyone knew it. Very interesting.

I find myself saying blast quite too often. Never said it before I started reading regency novels.

There is a nice lexicon of such words here: have your fill!

I've loved the word "gammon" since I first saw it almost 30 years ago.

I'm in Texas and I have heard "cut" and "cut dead" all of my life. "Cut direct" brought me to this page, wondering if it meant something else.