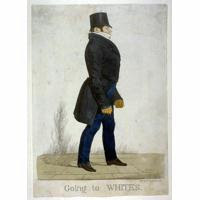 Every respectable Regency gentleman (and a few who weren’t exactly respectable) belonged to a gentleman’s club. Some of the more popular ones were White’s, Brooks’s, (yes that is the correct spelling and punctuation) and Boodle’s. All were very exclusive.

When a member was accepted into the club, it was known as an “election.” If a gentlemen had been a member for 3 years, others would say “three years after his election into so and so.” All exclusive gentlemen's clubs in London used a method of voting for proposed new members whereby a system of back and white balls were deposited, in secret by each election committee member, into a special box. A single black ball was sufficient to deny membership. Hence the term “blackballed.” 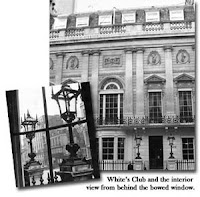 By far the most revered (and oldest) of London's gentlemen's clubs during the Regency Era was White’s. It was founded as a chocolate shop in 1693 by an Italian, Francesco Bianco, who’d changed his name to Francis White. White’s was politically conservative, which means most of its members were Tory. Even today it’s still considered the most prestigious club. Originally, when White’s became a club, it was mostly a gambling hub, with members who frequently played high-stakes card games. Whist, faro, quinze and hazard were some of the most popular games played. With all the clubs, obsessive betting occurred with some frequency. The smallest difference of opinion invariably resulted in a wager and was duly recorded in a book--everything from how many birds will perch on that tree in the next hour to who is Lady B's new lover were fodder for the betting books. 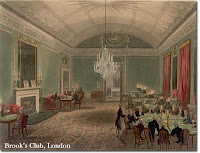 Brooks’s was basically liberal, which means a large Whig membership. For a while, the Prince of Wales favoured it. He changed his preference to White’s when they blackballed his close friend, Jack Payne. As a gaming club in the eighteenth century, which is just before the Regency Era, it had been in Pall Mal. The stakes were high. It was customary for gamblers to play for 50 to 10,000 pounds! Charles Fox and his brothers reportedly lost many thousands of pounds in a single night. Hazard was their game of choice. 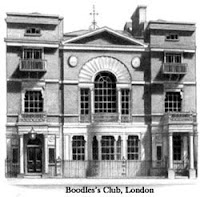 With Boodle’s, I’ve seen so many different characterizations of this one that it’s hard to say, but it seems to have offered deeper gaming than the above two. Some sources say Boodles was the club for country squires and those who 'rode to hounds' in the fox hunts. It wasn’t tied to any political party, at least not during the Regency Era.

Another was Watier’s which was a short-lived club started by the Prince of Wales's (or Prinny’s) chef. It appears to have specialized in fine food and very deep gaming.

There were many, many more clubs, but the above four were the ones with space in St. James's Street and thus at the core of society. There was the Beaf-steak (or Beefsteak) club, which had precisely thirty members and met once a week for a fine dinner. Their building was open to members for the usual purposes such as conversing with friends, reading the latest papers, gaming, etc. The Athenium Club focused on ancient Rome and Greece. I recall hearing that only Latin was spoken there which wouldn’t have been a problem for too many Regency gentlemen, since Latin was taught in every school.

There were private gaming hells, which, since gaming was restricted to members and guests, qualify as clubs. Many clubs had bedrooms that members could use as a sort of hotel during a quick trip to town.

My favorite was also the Four-Horse Club, also called the Four-in-Hand Club which, though originally a wild club of young men, had, by the early 1800s, become a respectable club for superb drivers. Great fodder for heroes, isn’t it? It was a small group with only somewhere between 30-40 members at its peak. They didn’t meet in any specific place. It began to fade around 1815 and disbanded in 1820, was briefly revived in 1822 but finally ended. The members met at set intervals to drive coaches-and-four out to Chalk Hill and back. Hard-core Corinthians supposedly exercised with a very specific uniform, but they didn’t have a clubhouse where they met. The rest of the time, Corinthians used Jackson’s Salon or Manton’s as their daytime hangout and might spend an evening in Cribb’s Parlor, but all of these places were open to anyone so they hardly qualify as clubs. I have always heard that the Corinthians hung out at the gambling hells more than at the clubs.

There was also the Alfred Club at 23 Albermarle Street. It began in 1808 and attracted writers and other men of letters. If I remember correctly, Byron was a member. It was a great success, and in 1855 it joined with the Oriental Club which was established in 1824 (just after the Regency Era) as a club for men who'd been "out East" in India and other areas.

So, to which club does your Regency Hero belong?
Posted by Donna Hatch at 12:01 AM

Great post, Donna - really interesting supplement to what I already knew. My hero in Dangerous Deceit is a member of White's!

The city of Pgh. had a gentlemen's club. Basically for business but it had dinning rooms and smoke rooms (I have to doubt gaming rooms but who knows). As late as 1969 women were still not allowed. It eventually allowed women in the dinning rooms but they had to use the back door!!!I no longer work in town but I would assume things have changed.

Very informative, and I'll bet you didn't even scratch the surface of what your research has revealed. Thanks!

I am trying to trace our family's ancestors and the Club that is mentioned in letters (written from the club by them) is The Pelham Club, 15 George Street , Hannover Square formerly known as The Albert club, that changed its name to the above on the 15th of May 1866. The family name we are interested in is Fitz-George (George, father and son), who both appear to have been members of the club. It would be particularly good for us if they had their members' records lodged somewhere, as we know very little about these two gentlemen. Any help/ideas welcome.

I've just installed iStripper, and now I enjoy having the best virtual strippers on my taskbar.

Thank you for Great Article!!
The Horns is a strip club in London. We have beautiful and sexy dancers performing table dancing. Come and enjoy with the hottest strippers

Thanks for sharing amazing information really such a wonderful site you have done a great job once more thanks a lot new slot sites with a free sign up bonus!