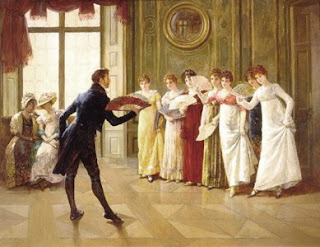 I recently stumbled onto a little-known fact that it was a custom among the very best houses of the ton to have elaborate pictures on the floors of their ballrooms (or drawing rooms converted to ballrooms) made out of chalk. Yes, chalk. This appears to have been done only by the wealthiest of hostesses, and probably most commonly done for special occasions.

Regency author and researcher, Kathryn Kane, in her article entitled The now vanished ephemeral art: chalking the regency ballroom floor states that chalking ballroom floors was done at only the highest levels of society, and was in fashion between the years of 1808 to 1821. This is also supported by The Rules of the Assembly:   Dancing at Bath and Other Spas in the Eighteenth Century, for the  Jane Austen Society of North America, for JASNA, Allison Thompson. It is from these two articles upon which my post is based.

Ballroom floors were made of polished wooden floorboards, such as shown in the picture above, but not too polished or the dancers would slip. Most of the time, the drawing room floors were covered with large carpets. But for a ball, they removed the furniture, and rolled up and removed the carpets. Most of the big houses didn't have exclusively designated rooms for ballrooms--that was a bit of a nouveau architectural design. Instead, they had state apartments with an enfilade of smaller, connecting rooms which could be opened or closed off, depending on the needs of the event.

The most common wood used for the floors was pine. Some of them were made of oak, however, oak wasn't really suitable because it's open-grained. Mahogany was too expensive. Wood created a wonderful backdrop for the elaborate chalk drawings that graced the floors of any elegant ball from about the early nineteenth century.

According Kathryn Kane, the earliest reason for chalking the floor was probably practical--for the safety of the dancers. The soles of most dancing slippers, or dancing pumps, during the Regency Era were of plain, smooth leather which could easily slip on a smooth floor. And considering how lively some of the dances were, slipping was a real concern. Many dancers rubbed the soles of their shoes with chalk before dancing so give their shoes better traction. I can't find a source as to when exactly the first host or hostess had the clever idea to chalk the entire floor for the ease and safety of their guests. But eventually, the trend grew to hire artists to draw elaborate designs in chalk all over the ballroom floor.

Naturally, the chalk art would be ruined as the dancers slid and danced over it. Some people liked to arrive early so they could view the chalk art before it was marred and I am sure some hostess waited until several guests arrived before she threw open the drawing room doors to show off the artwork spotlighted by a crystal chandelier. I am equally certain most guests were delighted with the elegant or fanciful designs created for the occasion.

Another advantage for chalk drawings was to disguise an old or worn floor. The drawings could be designed to hide a myriad of flaws on the floor which would be illuminated by a ballroom brightly lit by candles or gas lights--a requirement for any successful ball. The drawings might be concentrated in the center of a pristine floor, or spread all over entire floor to hide any embarrassing flaws. 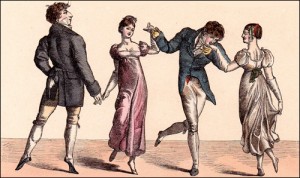 The designs were as varied as the hostesses. According to The Rules of the Assembly:   Dancing at Bath and Other Spas in the Eighteenth Century, for JASNA, Allison Thompson writes in her article for the Austen Society of North America
One feature of the ballroom at the highest levels of society for a short period between approximately 1808 and 1821 was that for the most special of events the ballroom floors were decorated for ornament and for safety with fanciful chalked devices such as arabesques, nymphs, and symbolic or allegoric images.  Thus, at the annual hunt ball in Warwick in 1813, the floor of the ballroom sported a colored-chalk full-length figure of Guy, Earl of Warwick, “in complete armor,” as well as another gentleman “in the uniform of a Member of the hunt, taking a flying leap over a barred fence” (“Sporting Intelligence” 243-44).  The chalked images took a long time to draw, and were an ephemeral beauty of the ballroom, quickly blurred by the dancing feet, as mentioned in a poem by Thomas Moore, published in 1813:

Chalk drawings were customized, and could be of anything. To quote Kathryn Kane: Floral designs were very popular for chalk designs, often larger images of the same varieties of flowers which had been used to decorate the ballroom. Arabesques were also fashionable, and in fact, it was a series of complex arabesque patterns which were chalked on the ballroom floor at Carlton House on the night of the grand fête. Mythological and fanciful motifs might also be seen, such as nymphs, mermaids, centaurs, satyrs, sea gods and/or classical heroes. Heavenly bodies, such as the sun, the moon, stars, planets, comets and shooting stars were also popular motifs. For those who had the right to bear them, their coat of arms might be chalked on the ballroom floor. At one ball during the Regency, the guest of a gentleman who had had his coat of arms chalked on the ballroom floor that evening is reported to have quipped that his host was dancing on his arms as well as his legs. Floral patterns were most common for engagement or wedding balls, though if either the bride or the groom had a coat of arms, that might be chalked on the floor, often in the center, surrounded by flowers. If the bride and groom both came from families with coats of arms, the coat of arms of the bride might be quartered with those of her new husband in the design which was chalked on the floor for their celebratory ball. The dance floor was frequently chalked for masquerades, oftentimes with figures in keeping with the theme of the masquerade. There are suggestions that the more risqué masquerades had equally risqué drawings chalked on their floors for the titillation of the dancers.

When a ball was given to celebrate a special event, the designs chalked on the ballroom floor might be in keeping with the theme of the ball... In November of 1818, the British Ministry in London held a ball for the American delegation. One of the delegates, Harrison Gray Otis, wrote to his wife about the ball. He estimated there were at least 250 people in attendance and there were two rooms set aside for dancing. In keeping the political nature of the ball, the floor of each room had a unique chalked design. In one room, a great white circle was chalked in the center of the room, in which was placed the armorial shield of Great Britain, encircled by the motto of the Order of the Garter, the Prince Regent’s crest and other symbols. In the second room, the floor also had a large white chalked circle, but this one contained the arms of the United States and was encircled by a set of symbols uniquely American. On 25 November 1823, The Royal Suspension Chain Pier in Brighton was officially opened. That evening, Captain Samuel Brown, the man who had designed the pier, and his wife, Mary, gave a ball at their home on the Marine Parade in celebration. The guests were delighted to find, when the ballroom doors were thrown open, that a magnificently realistic drawing of the Chain Pier had been executed in chalk on the ballroom floor created by local artist and landscape painter, Edward Fox. The chalk drawings also might reflect the occasion, such as a birthday party, or any special celebration.

The practice of chalk art wasn't limited to England, however; America also adopted the practice. A Mr. Weisiger, who had a very large ballroom had his floor chalked in honor of General Lafayette. And John Quincy Adams and his wife gave a ball in honor of General Andrew Jackson, who was Adams’ rival in the upcoming presidential election.

While colored chalk was sometimes used, the colored chalked messed up the hems of ladies dresses as they danced across the floor. Longer dresses, in particular, would have gathered up the chalk as the dancer moved over the chalk-drawn floor. Since white was such a fashionable color for ladies gowns during the nineteenth century, having a chalk-colored hem on a white gown would have been unsightly.

Since, to my knowledge, Jane Austen never mentions chalk drawings on ballroom floors, it must not have been a terribly wide-spread practice among the gentry, probably limited to the very rich. Nor are any chalk drawings showing up in any of the cartoons or engravings of the era; either the cartoonists and illustrators chose not to replicate them, or they chalk drawings weren't common enough among any but the most exclusive circles to be included.

Unfortunately, just like the Regency Era itself, chalk drawings are a long-gone practice. But they can be resurrected in the pages of a Regency Romance novel, such as my re-released book one of the Rogue Heart series, The Stranger She Married, coming soon. I'm sure other historical novels set in early America or England feature the charming practice as chalk drawings on the ballroom floor, either as a mere mention of the description, or featured prominently in the book. If you discover any pictures of such drawings, please let me know. I'd love to see them!
Posted by Donna Hatch at 10:13 PM

Marvelous material, and makes me think of all those ballet classes I accompanied. The first thing the dancers would do upon entering the studio is step into the box of resin, and make sure their toe shoes or slippers weren't too slippery.