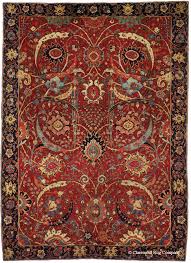 One of the greatest attractions of the Georgian and Regency eras are the grand estates with their luxurious interiors, plastered ceilings, and expensive Chinese papered walls. In the late Georgian and early Regency period, if one couldn't afford importing wallpaper from China, the English equivalent and more affordable high-quality Chinoiserie wallpaper sufficed. And just as paper gained popularity over stenciling, scagliola over marble, carpet and floor covering preferences evolved over time, thanks to the industrial age.

During the Regency era, Turkish and Persian rugs were extremely fashionable prior to 1790 and luxury carpet ownership spread from estate homes to the poor. With the Napoleonic Wars and the industrial revolution imports decreased and the rise of machines brought about a shift in the textile industry. Out of necessity, popular geometric and oriental patterns could be produced in England for a fraction of the cost of imported carpet. This technological advancement helped turn upholsterers and furniture-makers into successful and unique tradesmen.

There were varied types of carpet used in Regency homes and particular cities where they were constructed: Axminster and Moorfield, England.

“The centre for the manufacture of British knotted carpets, with their bold Neo-Classical patterns, was Axminster in Devon. The factories at Wilton and Kidderminster specialized in woven carpets, with the worsted warp brought to the surface to create a looped pile; this was either left as it was (a so-called ‘Brussels’ carpet) or cut to produce a velvet-like surface (a ‘Wilton’ carpet). Brussels and Wiltons were far cheaper and more versatile than Axminsters and other knotted carpets; woven in strips up to three feet wide, they were usually given frequently repeating patterns to enable them to cover all types of areas. They were also generally provided with a wide border and an elaborate fringe.” ~ Regency Style by Steven Parissien 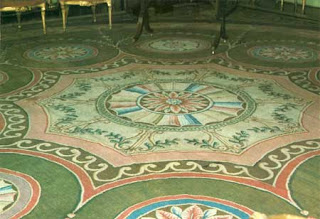 The Domesday Book of 1086 records Axminster as being Aixeministra, meaning ‘monastery or large church by the River Axe’ and stems from the Celtic ‘Axe’ and Old English ‘mynster’. Interestingly enough, Witty’s factory started at a Court House near a church. Every time one of his hand-tufted carpets was completed, a celebratory peal of bells sounded.

"...and Robert Adam produced some Neo-Classical designs that were woven at these two factories" (Moorfield and Axminster) "for rooms he was decorating..."

And "... some Axminster carpets were reaching New York and probably other cities on the East Coast of America by the 1770s." ~ Authentic Decor, The Domestic Interior 1620-1920 by Peter Thornton 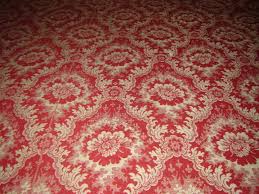 Ingrain: Less grand than Wilton carpet, ‘Kidderminster’ or ‘Scotch’ carpets (or Ingrain carpets as they were known in North America) had no pile, were cheaper, made using a double-weave and coarsely constructed to be reversible. Best used on stairs.

“Stair carpets give an air of great comfort and finish to a house and a cottage should never be without one.” ~ Loudon

Floorcloths, or oilcloths, were canvas or tow cloths nailed to the floor and then painted to look like stones, wainscot, and tessellated marble blocks. Floorcloths were used in high traffic areas and didn’t last long.

Matting, thin and designed with colorful patterns, was an alternative to floorcloth. Barbary mats were imported from North Africa. The French referred to Dutch and English mats.

"And advertisement in the London Evening Advertiser for
29 October 1741 offered, 'Barbary, Dutch and English matting'."
~ Authentic Decor, The Domestic Interior 1620-1920 by Peter Thornton

Druggets were ordered from Haig and Chippendale in green (most popular) or brown colors. Needlework borders offset various fabrics like baize (heavy wool), serge linen (twisted worsted), haircloth (a mixture of animal hair, cotton, linen, or wool), or similar heavyweight textiles that protected expensive carpets. A guest comprehended their status if and when the drugget was removed from the Axminster or Wilton because druggets caught crumbs, soot, and powder.

Patented Loom: "The cylinder printing of fabrics was first patented by Thomas Bell in 1783 and was widespread by 1810. Even more importantly, in 1801 a revolutionary new loom was invented by the Frenchman Jean-Marie Jacquard which, by replacing much of the effort of human labour by a series of punched cards, enabled complex patterns to be produced on a large scale and, once the initial investment on the cards and machinery had been recouped, very cheaply. In 1820, in a reinterpretation of the spirit of Waterloo, the Englishman Stephen Wilson employed an industrial spy to find out exactly how Jacquard’s invention worked, and—to a collective sigh of relief from the British textile industry—the following year was able to issue a British patent for a similar system.” ~ Regency Styleby Steven Parissien

Advertisements for carpets in the 18th Century:

"William Crompton ... Turner to his Royal Highness the Prince of Wales [makes] a new invented Machine, Carpet of Cloth List, which for Beauty, Strength and Service far exceed anything of that kind hitherto made..." ~ Advertisement in London Evening Post, 24 May 1740

"Carpets of the Royal Manufactory at Chaillot which exceed every other kind of carpets for beauty, strength, and duration of colours." ~ The New York Gazetteer, 23 September 1774

As a Factory Outlet, we offer the finest quality carpets at massively discounted rates. Get Cheap carpets and designer carpets, Brands such as Westex Ryalux Victoria Cormar Cavalier.

Want To Boost Your ClickBank Banner Traffic And Commissions?

No doubt Regency Carpets by Katherine Bone is an awesome article which include all the relevant information. So helpful thank for sharing your knowledge keep posting.
https://bit.ly/2HycOt9

Its always good to learn tips like you share for blog posting. As I just started posting comments for blog and facing problem of lots of rejections. I think your suggestion would be helpful for me. I will let you know if its work for me too.
Kitchen rugs

For Dubai products like carpets, Rugs and flooring stuff visit our site Carpetssite

Its in every case great to learn tips like you share for blog posting. As I just began posting remarks for blog and confronting issue of bunches of dismissals. I figure your proposal would be useful for me. I will inform you as to whether its work for me as well...
599fullhouse