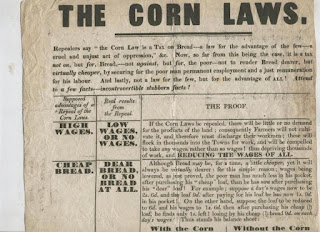 In fiction set in Regency England, there’s often some mention of the Corn Laws. These laws regulated the importing of grain (in England, corn refers to any grain). Corn Laws date back to the Twelfth Century, however, they became particularly important in the late 1700’s and early 1800’s due to both a population growth in Britain and blockades from the French during the Napoleonic Wars.

In the 1700’s, wheat prices had fallen due to an influx of foreign grain. At the same time, the Enclosed Acts had been passed—this meant there was no longer any open land that anyone might farm. Added onto all of this were the Game Laws—the penalty for poaching “or even being found in possession of a net at night” was transportation. 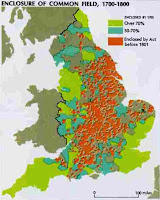 While the Enclosure Acts enabled landowners to extend their parks and fields, those without land lost their right to trap extra meat on open land. The poor were now in a precarious spot.

The Corn Laws stated that no foreign wheat (the staple of the poor) could be imported until British wheat reached  a price of 80/- per quarter. At the same time, those who worked the fields did not see an increase in wages to match and increase in food prices.


Bad harvest hit England in 1795, again over 1799 to 1801, and then again in 1802 and yet again between 1812 to 1822. One bad harvest is one thing—almost every farmer knows to store grain to deal with a bad year, and large scale farms can always get credit to get past one rough season. But repeated reduction in production meant two things—higher prices of the most basic food stuffs, and those with low incomes had less money to spend on goods. Manufactures also suffered losses due to the bad years. 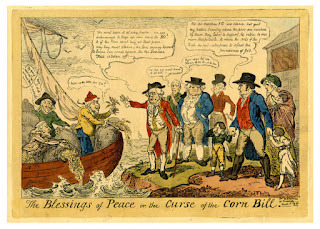 The years 1810–1811 had cold winters (1811 was the year the Thames froze sold, and it froze again in 1814), and then heavy rains often brought floods, particularly to the east, where the fens provided very bad drainage. Poor harvests were noted in 1809 to 1812, with rioting as “banks failed and export trade collapsed.” Along with this was the Luddite uprising, and in 1812 in Nottingham, “a riot, engendered by the prevailing famine, commenced in the morning.” But the fail harvest came in better than in the prior year, which helped with a temporary fall in grain prices.

With all this going on, it starts to seem reasonable why England feared there might be a similar revolution to the one that occurred in France. France’s revolution had been driven not just by a need for equality, but by poor crops and an increased population. England faced similar issues.

The winters of 1813 and 1814 were again cold and long, delaying the ability to plant. Frosts were reported in many districts that lasted on through May, and summer storms brought hail and rain, which caused extensive crop damage in Leicestershire and Nottinghamshire. By the end of August, the weather turned hot and farmers who had survived were able to get in their harvests. By October and November, early freezes and hard rains hit many areas of England and Scotland.

In 1815, the government attempted to fix corn prices, and, but the country saw unrest and riots in may of the hardest hit areas. In 1815, the national debt also stood at £834 million, but the Income Tax, enacted to pay for the war with France was eliminated, shifting the burden of payment to indirect taxation. Again, the poor were hit the hardest as tax fell onto good purchased. Those with money could afford this—those without had even less money. The end of the war in Europe finally meant that Britain could again freely import grain, but any import was more expensive than local produce—and the grain could only be imported based on what the Corn Laws allowed. 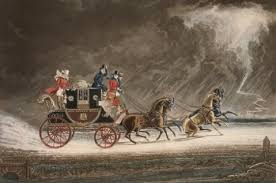 But 1815 again saw a hard winter, as did 1816. The Farmer's Magazine summarized 1816’s harvest as “uncommonly unpropitious” and comparing it with “the memorable year 1799”.


While hardy root crops that could survive frosts would provide some food, grains and cash crops failed. The Farmer's Magazine reported that many tenant farmers were unable to pay rents, and many landlords were unwilling to offer abatement. In Wales, the tax was collected in certain districts in goods rather than in coin.

Reports in Nottingham were that gentlemen who were well off would come to market and distribute food to those without.  At the same time, Britain was also having to deal with a large military force returning from Europe, most of whom had not been back home in a very long time. This provided an even larger workforce, but in some areas jobs were scarce or low paying. The smart soldiers stayed in the army and went on to other spots of unrest in the growing empire.

Another wet summer occurred in 1817, with crops reported as “bad” in Scotland, and then 1818 provided a long, hot, dry summer, with rains finally arriving in autumn, then back to cold in 1819 with late frosts in May, and wet again in 1820. The up and downs of the weather continued on through until the late 1800s. And it was the potato blight and famine in 1845 that finally brought about the end of the Corn Laws, which were repealed in 1846.
Posted by Unknown at 1:58 PM

Do you have a source for that newspaper ad, against repealing the corn laws?

I have found that this site is very informative, interesting and very well written. keep up the nice high quality writing. Burleigh blue calico

I just want to thank you for sharing your information and your site or blog this is simple but nice Information I’ve ever seen i like it i learn something today. Matthew Rieger