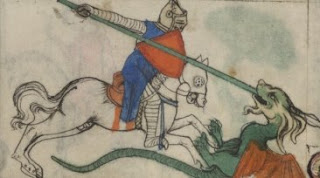 While I was writing a Christmas novella, I had the need for my hero and heroine to go on an outing out in the countryside, to some famous local place they could ride to on horseback. Research turned up the rather fun legend of the Bisterne Dragon, a piece of folklore from the New Forest near Lyndhurst, which is the place where the dragon was buried. A perfect outing for a hero to take his heroine. I thought I’d share it with you.

As the legend goes, long ago a “devouring dragon” had settled into a lair in the New Forest near Burley Beacon, at the village of Burley. The dragon would fly each morning to the village of Bisterne to terrorize the villagers and exact his payment of milk (thought sometimes listed as a maiden). The villagers appeal to the Lord of the Manor to save them. 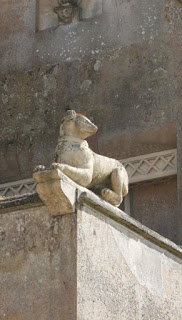 The lord is usually given as Sir Maurice de Berkeley (or Sir Moris Barkly) “beinge a man of great strength and courage” who tried three times to slay the dragon. The first two attempts failed, but on the third attempt, he took his two dogs with him, Grim and Holdfast, sometimes said to be mastiffs. For their valor, the dogs are memorialized at Berkeley Manor, being carved onto the wings above the manor house. Sir Maurice constructed a hide on what is still called Dragon Field, near Lower Bisterne Farm. The knight also coats his armor with birdlime and shards of glass to injure the dragon if he grabs or bites him.

This third battle rages all around the New Forest, finishing up outside the village of Lyndhurst, where Sir Maurice managed to kill the dragon, whose body becomes a hill called Bolton’s Bench. In the process of vanquishing the dragon, the two dogs are killed and are buried on the hill.
Although not wounded physically, Sir Maurice does not escape unscathed. For thirty days and nights he cannot eat nor sleep, his mental faculties shattered by the battle with the dragon, and at the end of that time he returns to Bolton’s Bench and dies. From his body, and those of his dogs, there grow three yew trees that may be seen on the hill to this day. 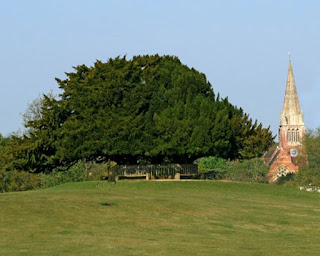 I found this tale to be charming and utterly fascinating and my hero and heroine in my upcoming Christmas novella, A Match Made at Christmas, had a wonderful time talking about the legend and exploring Bolton’s Bench.

Email ThisBlogThis!Share to TwitterShare to FacebookShare to Pinterest
Labels: Legends, The Bisterne Dragon

Thank you, Donna! I love running into things like this and incorporating them into my books. :)