A Whirl of Courtship by Jenna Jaxon

During the Regency era there were very strict rules for courting couples. They could never be alone together unless they were chaperoned, were betrothed, were in an open carriage, or on horseback. With all these strictures, our modern sensibilities make us wonder how they ever found time to get to know one another. There were, however, several outings the couple could indulge in and not create a scandal.

A gentleman could, in all propriety, accompany a young woman to several public sightseeing landmarks without censure. Places such as the Tower of London, Hampton Court, Hyde Park, or the British Museum to see the Elgin Marbles. As long as the couple were in full view of the public, they could walk and talk together and preserve the proprieties. 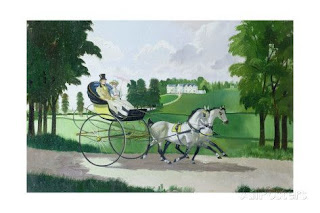 Carriage rides were a very popular way for a couple to indulge in private time together while courting. The carriage had to be open, but could also be a sporty curricle or a high-perch phaeton (the sports cars of the Regency period). Rides were usually taken in Hyde Park during the most fashionable hours between 4:30pm and 7:30pm, the point being to see and be seen by everyone else in the ton.

One favorite outing was to go to Gunter’s Tea Shop, one of the most fashionable light eateries in London. Gunter’s was famous for 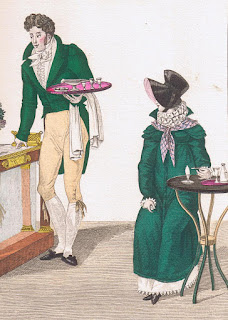 their ices and sorbets. Located in Berkley Square in Mayfair, it was another establishment where the ton came to see and be seen. The Georgian Index reports that it became popular to eat the ices outside. “Gunter's Tea Shop was the only establishment where a lady could be seen eating alone with a gentleman who was not a relative without harming her reputation. The ladies would remain seated in the carriages in the shade of the Maples. Their gentlemen escorts would step down from their equipages and come round to the passenger side of the curricle or barouche and lean against the Square's railings sharing the lady's company and the treat.”

Another outing, also very popular and a bit daring, was a trip to the Vauxhall Pleasure Gardens. This was a vast park of several acres of land that had different kinds of entertainments at night, from musical presentation to fireworks. Vendors sold various wares and although the best lit place in London at night, it still boasted several darker pathways down which a couple might stroll for a bit more private conversation. Usually ladies formed parties to attend Vauxhall insuring chaperones for a couple until they had agreed to a formal engagement. 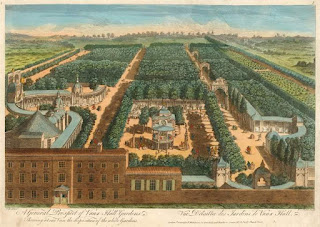 These outings were an approved part of courtship during the Regency. In many of my Regency romances, my courting couples make use of these excursions as they try to get to know one another, as did countless real couples of the period. Check out this social whirl in Heart of Desire or any of my Handful of Hearts novellas, all on sale during the month of April for .99 each.

Authors like to play with what "alone" meant: was the parlour door open to the aunt on the other side? Was the couple visible from a window as they walked in the garden? These are modern tricks that may or may not have been acceptable. Great article.

Thank you, Suzan! Great questions! I think, as it also happens today, young couples who wanted to "get together" probably found some ingenious ways to make it happen and bent the rules of propriety to the breaking point in the pursuit of happiness. And of course, once the couple was engaged, well, they were as good as married and often acted as if they were! :)