Unmentionables: A Brief History of Underwear by Jenna Jaxon

Underwear, garments worn underneath outer garments, has been in existence for thousands of years. The first form was the simple loincloth that covered men’s genitals, in evidence 7,000 years ago. In fact, more than this simple undergarment was deemed unnecessary by most people until the Middle Ages.

By the Medieval period, men’s clothing had changed and men acquired several new undergarments. Braies were a loose fitting pant-like garment that men stepped into, then tied at the waist and around the calves. Wealthier men wore chausses, worn only on the legs and again tied at the waist. These were eventually replaced by hose that in the Renaissance were adorned with a codpiece, a pouch covering the genitals that was also meant to accentuate that area. What we would deem women’s underwear does not come on the scene until the Renaissance. Previously women would have worn a chemise, 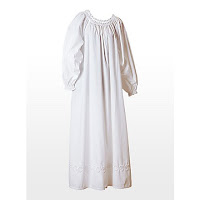 a shirt-like garment made of linen worn next to the skin that could be laundered easier than the costly silk and velvet outer garments. At this time women also acquired stays, a garment of linen stiffened with buckram, whalebone, reeds or canes that flattened their breasts. 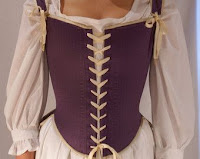 In the 18th and 19th centuries, stays changed to be more lightly boned and were called corsets. In the Regency period they were more relaxed, less constricting. By the Victorian era, when a wasp waist was the cornerstone of beauty, they became extremely constrictive. Corsets remained the major women’s undergarment until the 20th century when the liberty bodice gave them more freedom. In the 19th century, women also acquired pantalettes or pantaloons, crotchless underwear designed to hide the legs and provide

warmth under the huge bell-shaped gowns of the period. The modern brassiere was invented in 1913 by Mary Phelps Jacob and caught on during World War I when metal for boning corsets was in short supply. 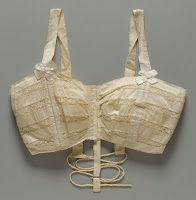 Men and women’s underwear changed constantly during the 20th century as the garments became increasingly more comfortable due to new fabrics. Modern underwear came about largely in the 1930s. Men’s briefs and boxer shorts, women’s girdle and bra all became popular in the 30s. By the 1960s and 70s underwear was touted for its sex appeal rather than its durability. Current popular items include the G-string and thong for women and boxer briefs for men.
Posted by Jenna at 11:04 AM

Email ThisBlogThis!Share to TwitterShare to FacebookShare to Pinterest
Labels: underwear