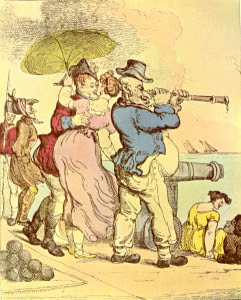 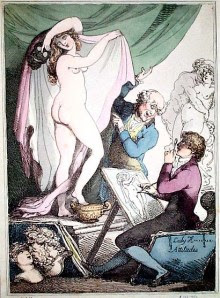 printed several series his works, such as Dr. Syntax's Tour and The Microcosm of London for which he gained much fame. He illustrated prominent authors' works of the period such as Smollett, Goldsmith, Sterne, and Swift. He worked primarily in pen and ink, with a watercolor wash, the delicate nature of his work contrasting sharply with the coarseness of his subjects. 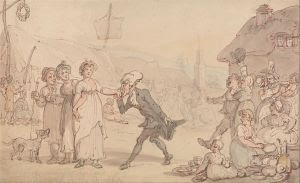 One of his most popular series depicted men and women in the most licentious poses imaginable. These were the ones done for the prince and that now are on display in the British Museum and the Victoria and Albert Museum. (These three prints are the only ones not too bawdy to print!) But I chose some that I think will give you a feel for Rowlandson's works. These prints were so popular the original engraved plates were worn completely out with the printing of them.
Posted by Jenna at 12:17 AM